Choreographers Noam Gagnon and Dana Gingras, with composer Jean-Yves Theriault (co-founder of the rock group Voivod), came together in 1992 to create the performing unit known as The Holy Body Tattoo. Gagnon and Gingras began their choreographic collaboration during the years 1987-89, when they were both company members of EDAM; their creative partnership was solidified at Le groupe de la place royale in Ottawa in 1991. Theriault left the company in 1999.

The company's founders assert that personal and collective secrets are written on and revealed by the body, specifically the body pushed to extremes of effort and exhaustion. The Holy Body Tattoo takes conventions of popular culture and uses them as a framework for dancing that has been described as "gruelling,""ferocious" and "assaultive." Its battering style links it to dance work being produced in Québec, France and Belgium, but its commitment to minimalism on stage and in its administrative infrastructure sets it apart within the genre.

Gagnon and Gingras thrive on revelation through repetition, in the studio and in front of audiences. The Holy Body Tattoo produces work at its own pace - just two full-evening dances in its first eight years of existence: Poetry & Apocalypse (1994) and our brief eternity (1996). A 26-minute film version of Poetry and Apocalypse, a collaboration with Vancouver filmmakers William Morrison and Valerie Nelson, was released in 1997. our brief eternity won the Dora Mavor Moore Award for best ensemble performance in 1997.

In 2000 The Holy Body Tattoo was awarded the first Alcan Performing Arts Award in the dance category, a $50,000 commission for a new work. The result was the critically acclaimed international co-production Circa, which premiered at the Vancouver East Cultural Centre in February 2000. The company calls the piece "a celebration of the sensual forces of submission and control." It is that and more, a postmodern deconstruction of the tango that interweaves film footage by William Morrison and plays against original music by Steven Severin, Warren Ellis and England's The Tiger Lillies, a three-piece band with a weirdly compelling stage presence and haunting sound.

Based in Vancouver, the Holy Body Tattoo is one of Canada's most toured small dance companies. It has shown its rabid, consuming dances, with their post-industrial age lights, sounds and film images, at Canadian and international festivals, including the New Moves Across Europe festival in Glasgow, Scotland, the Pride Arts Festival in London, England, and the Marator de l'Espectacle in Barcelona, Spain. The Holy Body Tattoo toured Austria, Hungary, Germany, Belgium, England, Scotland and the Netherlands in 1997; and Germany, Belgium, Scotland, the Netherlands, France, Italy, Slovenia, Slovakia and the Czech Republic in 1998. Circa has been seen throughout Canada, the United States and Europe.

Since its earliest days The Holy Body Tattoo has been committed to alternative forms of presentation and distribution. In this it has been ahead of the field: its cross-marketing ventures in music and film, its appearances on the international club circuit and its creative use of The Holy Body Tattoo Web site for product distribution (CDs, posters, T-shirts and videos) as well as presenter bookings are now industry standard for small dance companies seeking survival within an increasingly competitive marketplace.

The Holy Body Tattoo has been company in residence at the Vancouver East Cultural Centre since 1996. In collaboration with the VECC the company has developed a number of educational initiatives targeted at students between the ages of 15 and 18. In 2001 The Holy Body Tattoo created its Emerging Dance Artist Initiative, an annual travel/study award that supports young Vancouver dance artists. 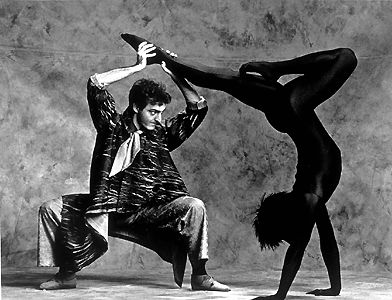