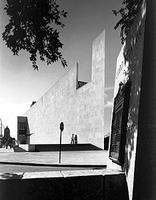 The Winnipeg Art Gallery (WAG) was established in 1912 in two rented rooms in the city's old Federal Building at the corner of Main and Water Streets. The Gallery would occupy various other locations as its collections and programming grew, including its former residence in what is now the Manitoba Archives Building on St. Mary Avenue.

At the St. Mary Avenue location, under the guidance of curator Dr. Ferdinand Eckhardt, who presided over the Gallery's operations from 1953 to 1974, the Gallery began its transformation from a provincial facility to one of Canada's major exhibiting and collecting institutions. Under Dr. Eckhardt's stewardship, the Gallery launched an ambitious exhibitions program and began acquiring significant Canadian and international art, including the Gort Collection of late Gothic and early Renaissance art.

The beginnings of what would become the WAG's world recognized collection of Inuit art occurred in 1960 with the acquisition of the George Swinton collection of 130 Inuit sculptures. The Jerry Twomey collection of some 4000 Inuit art works arrived in 1971. With over 10 700 works, the WAG is now home to the largest public collection of contemporary Inuit art in the world.

In addition to its important Inuit art collection, the Gallery also boasts significant holdings of decorative art, a collection comprising 4000 objects. These include ceramic, glass, metal, and textiles dating from the 17th century to the mid-20th century. The Winnipeg Art Gallery also possesses an extensive collection of photography of mostly contemporary Canadian origin, comprising close to 1300 works.

The Winnipeg Art Gallery's current building, designed by Winnipeg architect Gustavo DA ROZA, was opened to the public in 1971. Clad in pale Manitoba Tyndall stone, the building sits on a triangular site, presenting a dramatic sculptural presence resembling the prow of a ship. The building boasts eight gallery spaces, a 320-seat auditorium along with a rooftop sculpture garden, research library and lecture and meeting spaces. It was enlarged in 1995 with the opening of the adjoining WAG Studio Building, offering art classes to children and adults.

The Winnipeg Art Gallery maintains a vigorous program of international and Canadian art exhibitions with a special emphasis on art from Manitoba. The Gallery has mounted exhibitions that have toured around the world, including to Spain, Colombia, Mexico, Venezuela, Taiwan, Norway, China, Italy, and the United States. With a collection comprising almost 24 000 works, the Winnipeg Art Gallery is one of Canada's most prestigious art institutions.

In September of 2012, the Winnipeg Art Gallery launched a six month long celebration in commemoration of its hundredth anniversary, which fell on 16 December of that year. Running until August of the following year, the centennial celebration featured a group of major exhibitions, including the contemporary exhibition Winnipeg Now, Creation & Transformation: Defining Moments in Inuit Art, and Only in Canada: International Masterworks, featuring 100 outstanding artworks drawn from Canadian collections.