Over the rest of his lunch, Green, now Canada's hottest comedy export, receives similar attention. But it is nothing like the hysteria he has generated south of the border.

This article was originally published in Maclean's Magazine on November 29, 1999

Over the rest of his lunch, Green, now Canada's hottest comedy export, receives similar attention. But it is nothing like the hysteria he has generated south of the border.This article was originally published in Maclean's Magazine on November 29, 1999 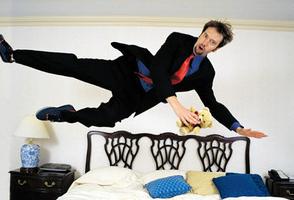 Shock comedian Tom Green, whose show is one of the most highly rated on MTV (courtesy Maclean's).

Tom Green turns cautiously towards the fan who approaches him in a Toronto restaurant. The bean-thin, 28-year-old Canadian comedian greets the intrusion with a tepid smile. "Tom Green! You rule, man!" says the tall, red-haired, middle-aged Maritimer, handing over a scrap of paper. "You gotta sign some ignorant thing for my friend Gord. Like, 'Gord, you suck the biggest f _____ g onion I've ever seen.' " The man goes on to offer explicit anatomical suggestions for where Gord can apply his mouth. Soft-spoken and dressed in khaki pants and a navy-blue sweater, Green smirks as he signs. "I think I'll go with 'sucks the biggest onion,' " he says dryly. "You can't beat that."

Over the rest of his lunch, Green, now Canada's hottest comedy export, receives similar attention. But it is nothing like the hysteria he has generated south of the border. The Tom Green Show is one of the most highly rated shows on MTV, and he cannot walk down the street without attracting mobs of young fans. The comic recently signed a deal to write and star in a movie for Disney. Major American magazines and newspapers, including The New York Times, Rolling Stone and Entertainment Weekly, have profiled the comedian. The press love writing about Green because he is the Evel Knievel of television comedy. While Jim Carrey, who stars this December as guerrilla comic Andy Kaufman in Man on the Moon, can pretend to be a groundbreaking renegade, Tom Green is Kaufman's heir apparent. Like Kaufman, Green thrives by crashing convention, often to gross or bizarre effect. He will drink milk directly from a cow's udder, use a dead raccoon as a prop and has burnt the Canadian flag. He once even planned - or so he says - on frying and eating a benign cyst that a doctor removed from his father's head (his father ruined the bit by telling Green he was having a hemorrhoid operation).

Such antics have been less enthusiastically applauded in Canada, even though Green's video, Something Smells Funny, has sold 30,000 copies and reached number 5 on the Canadian video best-seller list. The Canadian media, usually quick to hail any Canuck success on American turf (no matter how slight), tend to dismiss him as a shock comedian who will sink to any low to get a mean-spirited laugh. But Green's fans, many of them under 25, worship him for his outrageous, irony-drenched tactics, which appeal to their adolescent angst. "He is doing all the things I want to do but I'm afraid to," says 15-year-old Michael Berger, one of more than 100 Toronto youths who lined up outside talk-show host Mike Bullard's show to see Green earlier this month. "He is fearless."

Whether nasty storm trooper or courageous comedian of the absurd, Green is not averse to having his work recognized. In early November, he travelled to Toronto from his new base in Los Angeles (he lives alone in a rented bungalow, having just broken up with his girlfriend of six months) for the Gemini Awards. Green was nominated for best performance in a comedy series (he lost to the cast of This Hour Has 22 Minutes). And he was the centre of attention during the gala event. Producers were eager to shake his hand, while women kept buying him drinks. Greg Thomey of 22 Minutes declared that he and his wife love The Tom Green Show.

Green has been seeking such adulation since he was a kid. Born in Pembroke, Ont., to Canadian Armed Forces Capt. Richard Green and his stay-at-home wife, Mary Jane, Tom was an army brat who moved around a great deal until his family settled in Ottawa when he was 7 (he has one younger brother). He quickly found that cutting-up won him friends. His Grade 7 report card states: "Tom must learn to pay attention and not distract others." He would also sneak out of his bedroom window and skateboard through the city all night.

The young Green idolized David Letterman and Monty Python. At 15, he started performing on amateur night at Yuk Yuk's, a stand-up comedy club. The veteran comics considered him a mascot and referred to the youngster as "little Tommy Green from down the street." The aspiring comedian did not know it, but he was following in the footsteps of some of this country's greats. Rich Little, Dan Aykroyd, The Kids in the Hall's Mark McKinney as well as stand-ups Mike MacDonald and Norm Macdonald all hail from Ottawa. The city's strange mixture of patriotic bluster, diplomatic culture and hoser hell-raising produces a dark streak of irony. "Everything gets spun in Ottawa," observes Howard Lapides, who manages both Green and Bullard and spent the 1970s living in Ottawa. "There is always an official line full of BS, and guys who grow up there react to it."

Green's first professional work was as a musician. After dropping out of a college radio and TV program, he formed the rap-spoof group Organized Rhyme with two high-school buddies, and the trio soon won a record deal with A&M. During 1990, a film-maker shot a documentary about the group, which featured plenty of backstage goofing around. Green realized, he now says, that he would "rather be making videos and doing silly faces."

That same year, Green teamed up with another Ottawa kid named Glenn Humplik to co-host a crazy, midnight-to-6 college radio show. And when he suggested late-night soccer games on Parliament Hill, as many as 200 kids would turn up at 2 a.m. In 1995, Green, along with Humplik and skateboarding friend Phil Giroux launched The Tom Green Show on Rogers Cable TV. Childhood friend Derek Harvie joined one year later. The Comedy Network snatched the show up and began broadcasting it nationally in February, 1998. Within months, it became one of the network's highest-rated shows. "It's not something I totally understood," says its vice-president Ed Robinson. "But the response was undeniable."

Then, after meeting Los Angeles-based Lapides, the two approached the American networks. They wanted Green to join existing shows as a bit player, but in November, 1998, Lapides convinced MTV to consider building a program around him. The comedian pitched his show to 10 MTV executives in Los Angeles, finishing by covering himself in shaving cream while shouting, "I want to be on MTV!" The network signed him the following day. "You know," says Green, "I just didn't want to come off too boring."

The MTV version of The Tom Green Show, which was originally taped in New York City but is now based in Los Angeles, is slicker and better-produced than the original, but the essence has not changed. It is divided into studio bits, with co-hosts Humplik (who sits on the couch alongside Green) and Giroux (who stands in the back laughing) and field segments in which Green interacts with civilians. Humplik and Giroux never know what Green and his writers have planned for them. "We're three idiots," Humplik says. "And we want people to know that."

Green's beleaguered parents continue to be regular targets. He has painted their house plaid, had a pornographic picture airbrushed on their car, and brought a dozen farm animals into their house. The couple once threatened to sue their son and MTV, but backed off. "We thought it wouldn't help his career," says his father. "And we can take a certain amount of joking. But we're hoping he'll move on to someone else." Green frequently videos himself waking the couple up in the middle of the night, and once dropped a severed cow's head in their bed. He says that it's "payback" for a somewhat authoritarian upbringing, which included Green's father waking Tom early in the morning, after the youth had been up late partying, by playing CBC Radio at high decibels. "I've been doing this stuff for five years, and they've been pissed off the whole time," Green jokes, but with a hint of seriousness. "It's not going to stop - not until we're even."

Green's field segments are essentially home videos of himself acting out his most subversive and antisocial fantasies. Green once made a video diary of himself getting drunk over a five-hour period. The bit contains a telling moment which encapsulates Green's philosophy. At the height of his inebriation - long after downing close to 26 ounces of rum and shortly after vomiting into the toilet - Green turns to the camera and says, with a look of intense disbelief, "We're taping a TV show." The thought hits him like a dose of amphetamines.

At its core, The Tom Green Show is a spoof of 1990s-style reality TV. Thanks to advances in digital video cameras, shows such as Cops, The Jerry Springer Show and When Stunts Go Wrong draw big ratings by packaging sensational events. Green uses the same crew as a reality show (a cameraman and handheld microphone), but the person controlling the camera is part of the mayhem. On Cops, the more those filmed act up, the more helpless they become. The more Green acts up and humiliates himself the more empowered he becomes. Green mocks the public's insatiable hunger for the absurd and sensational.

Green's anarchistic comedy is reminiscent of the Dada movement, launched in 1916 as a reaction against the First World War. Dadaists revered the absurd and placed an emphasis on the role of chance, and Dadaist playwrights used buffoonery and shocking stagings to assail mainstream values. "I never know myself what's going to happen," says Green. "It's the excitement of figuring it out on camera."

Most Canadian critics consider such bits objectionable, even un-Canadian. After all, homegrown comics are supposed to be nice, like Mike Myers and the late John Candy. In fact, Green is following an established Canuck tradition - lampooning American pop culture. Johnny Wayne and Frank Shuster sent up the American radio and silent movies they grew up on. Lorne Michaels's Saturday Night Live still parodies Sid Caesar and American news. SCTV's players satirized 1970s U.S. television. Tom Green is right on schedule with his spoof of reality shows.

The night of the Geminis, Green blows off a little steam with Giroux and Humplik. It is 3:30 a.m., and all three are a little tipsy. Now, in a hotel room crammed with revelers, Green quietly surveys the crowd. He is subdued. For Green, it is a freak occurrence - he is blending in. The scene recalls a statement he'd made earlier. "It's kind of sad but, what I'm like on the show, that was what I was like all the time before I did the show. I was always on. But, you know, once you've taken the cream off your body, or made up with your parents, you don't really feel like going out and jumping in a water fountain." Tom Green keeps the insanity where he thinks it belongs - on television.