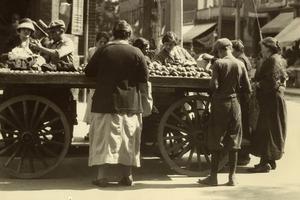 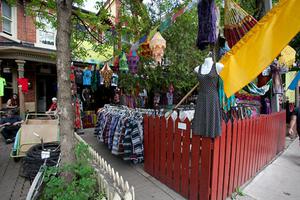 "A Microcosm of the Canadian Mosaic"

If Toronto is a "city for all," then Kensington is a "neighbourhood for all." Since the early 20th century waves of immigrants from different parts of the world have created there a colourful microcosm of the Canadian mosaic.

Located west of Spadina Avenue in the heart of downtown Toronto, what is now Kensington Market was once an ordinary cluster of residential Toronto streets, with homes built in the mid-to-late 19th century. In the first decades of the 20th century, the area became a preferred neighbourhood for many Jewish immigrants from Russia and eastern and south-central Europe (see Jews). Jewish merchants sold their wares from pushcarts and horse-drawn wagons, while others converted the first floors of their homes into stores along Kensington Avenue and Baldwin Street, where they sold crated chickens, live fish, pickles and cheeses made on site.

As the decades passed, most of Kensington's Jewish residents moved out of the area, and other newcomers moved in. The Portuguese painted the old house fronts in bright colours, and decorated front yards with religious icons. In the 1960s, families from the Caribbean, China and East India arrived and opened up shops, many continuing the Jewish tradition of opening stores on the first floor of their homes.

Today, Kensington Market remains a fiercely independent, vibrant, and diverse commercial and residential neighbourhood. It was declared a national historic site in 2006.