A reimagined advertisement for the mock parliament held at Walker Theatre, January 1914, in which Nellie McClung took part and helped advanced the cause of women's suffrage (courtesy Government of Canada). 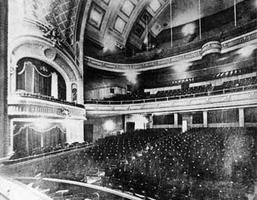 An interior view of the Walker Theatre, 1907 (courtesy Provincial Archives of Manitoba/N13272).
PreviousNext

The Walker Theatre (subsequently renamed the Odeon Theatre, now called the Burton Cummings Theatre for the Performing Arts), built in Winnipeg as a legitimate theatre, opened in December 1906, though construction details were not completed until February 1907. It was named for owner Corliss Powers Walker, who added it to his small string of South Dakota theatres along the Northern Pacific Railway route, of which Winnipeg was the northern terminus. Walker, who aligned himself with the powerful New York theatrical syndicate run by the Broadway firm Klaw and Erlanger, brought to Winnipeg and other locations along the route a dazzling array of quick-changing bookings of top entertainments, from Shakespearean and other serious plays performed by prominent actors, to ballets, operas, orchestral works and Broadway-type musicals.

Designed by Howard C. Stone of Montréal, the Walker was modelled on the famous Auditorium Theatre in Chicago (erected in 1889; designed by Adler and Sullivan) which is surrounded by a commercial complex. Unlike the Auditorium, however, the Walker was never wrapped with its intended skin of fenestrated offices, leaving its blank main volumes exposed and only a relatively small finished facade fronting the street. The inside was a different matter. Here the magnificent vaulted ceiling closely resembled that of the Auditorium Theatre. The curve of the proscenium arch and sounding board was repeated through ever higher bands to create a soaring monumental space. Decorative plaster detail was kept to a minimum to emphasize the larger architectural elements, such as the huge sidewall arches and the 2 curving balconies. The top balcony was steeply raked and furnished with wooden pew-like benches where holders of inexpensive tickets could cram together - a relic of Walker's policy of making high culture available to all levels of society.

The Walker provided generous spaces for the mingling of patrons in elegant lounges. There was also a deep stage area - nearly 25m (80 feet) wide, 12m (40 feet) deep, and 21m (70 feet) high - as well as a huge fly tower, and broad wings to accommodate the comings and goings of large companies and elaborate stage sets. Behind the stage was the 3-storey block devoted to dressing rooms, property rooms and the scenery dock, with each level having access to a hand-operated elevator. All these appointments set it apart from the typical vaudeville theatre, which usually featured fewer performers, shorter and simpler acts and sets, and a less sophisticated clientele that was encouraged to arrive and leave with dispatch.

The Walker was built to resist fire, its owner having been impressed by a 1903 theatre fire in Chicago that saw much loss of life. A steel cage system was employed, with many structural members encased in concrete or terra cotta. Concrete floors (covered with fire-resistant wool carpet), fire-retarding metal doors between spaces, brick and terra cotta firewalls, and slate-covered metal stairways were incorporated, all lending credence to Walker's claim that it was the first fireproof theatre in Canada.

Walker carried on his theatre operation until 1933, shifting the nature of entertainment from time to time in response to changing conditions, especially the decline of available attractions when American talent and investment shifted into the motion picture industry in Hollywood. Increasingly, more British touring companies were engaged, leading to a second period of exciting legitimate theatre at the Walker. Non- theatrical events have contributed to its distinguished history, including a 1918 political meeting of the Winnipeg Trades and Labour Council and the fledgling Socialist Party of Canada, which led to the infamous Winnipeg General Strike. The theatre also hosted debates and a mock parliament in which Nellie McClung took part and which advanced the cause of women's suffrage. Harriet Walker, wife of Corliss and a former New York actress herself, was instrumental in these latter occasions. In 1933, however, during the Depression, the theatre was forced to close; the City of Winnipeg seized the building in 1936 due to unpaid back taxes.

In 1944, theatre owner Henry Morton bought the Walker, and he reopened it in 1945 as the Odeon Cinema. For almost 50 years, the building served as the city's leading single-screen movie theatre in downtown Winnipeg. During this period a false ceiling was installed, which closed off the upper balcony. In 1990 the Walker Theatre Performing Arts Group Inc. purchased the building and began steps to restore it and provide performing arts programs. In March 1991 the Walker Theatre reopened, partially restored.

Regaining its former reputation as a popular venue for live theatre and music, the Walker was recognized in 1991 provincially as a Grade One Heritage Building and federally as a National Historic Site.

In August 2002, the Walker Theatre was renamed The Burton Cummings Theatre for the Performing Arts, in recognition of the noted Winnipeg-born singer, pianist, and songwriter (see Burton Cummings). The current "Cummings" sign is located on the opposite side of the façade from the original "Walker Theatre" sign, and only features a vertical plane; in between these eras, the Odeon also had a now-lost neon sign on the main façade.

In 2009, the Burton Cummings Theatre, benefiting from Parks Canada's National Historic Sites of Canada cost-sharing program, announced a $3.4-million project to refurbish and repair the building.