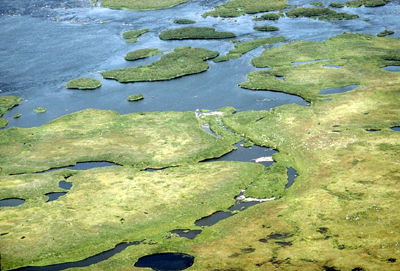 Wapusk National Park (11 475.0 km2) became part of Canada's national parks system on 24 April 1996 when a federal-provincial agreement was signed providing for its establishment. This national park extends to the east and south of Churchill, Manitoba, and protects a representative sample of the features and wildlife of the Hudson and James Bay lowlands.

The national park lies on a low-lying plain gently dipping towards Hudson Bay. Underlain by continuous and discontinuous permafrost, the plain is influenced by a maritime subarctic climate and covered by the most extensive mantle of muskeg in North America. Water lies everywhere, covering half of the land's surface with lakes, bogs, fens, streams and rivers.

A young landscape, it continues to experience isostatic rebound at a rate of about one metre per century, from the great weight of the ice of the last glacial period and the huge Tyrrell Sea created by glacial melt. Raised beach ridges, strand lines, eskers and moraines are prominent features as a result, and break the uniformness of the flat landscape.

Lying within the transition zone between the treeless tundra and the borel forest, the vegetation of the area is ecologically diverse and has a high number of rare plant species for this latitude. Particularly significant are the wetland communities and the plant species associated with the boreal forest at the northern limit of its range.

The park includes one of the largest known polar bear denning areas in the world. Of international significance is the habitat along the coast of Hudson Bay for hundreds of thousands of nesting, staging and feeding waterfowl and shorebirds. The park is also on a major migratory flyway where rare bird species such as Hudsonian godwit, Ross's and ivory gulls, Caspian tern, Hudson Bay subspecies of common eider, peregrine falcon, great grey owl and sandhill crane may be seen. A rare subspecies of woodland caribou and numerous fur-bearing species (eg, beaver, red and arctic fox, wolverine, etc) also reside in the park.

The Churchill area has long been occupied by Chipewyan and Cree; Métis and European settlement began in 1619. The entire region is of historical importance as a centre of the fur trade and in illustrating the influence of the fur trade on cultural patterns and movements.