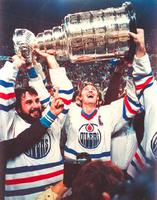 Wayne Gretzky holding the Stanley Cup aloft for the Edmonton Oilers, the most exciting team of the 1980s (courtesy Edmonton Journal).

Wayne Gretzky is the first child of Walter and Phyllis Gretzky; he has four younger siblings — Kim, Keith, Glen and Brent. He first started skating before the age of three on the Nith River near his grandparents’ farm in Canning, Ontario. Under his father's guidance, Wayne mastered the skills of the sport on a backyard rink in his home of Brantford, Ontario.

Gretzky started playing minor hockey as a six-year-old in the Brantford Atom League, debuting for the Nadrofsky Steelers, a Novice A Division team. Gretzky was undersized as he was playing with children that were four years his senior, but his skill level more than made up for his small stature and it soon became clear that the young Gretzky was a hockey prodigy.

The following season, he scored 27 goals as a seven-year-old. The next year, he nearly quadrupled his goal output with 104 goals. However, Gretzky proved he was in a league of his own during the 1970–71 season, in which he scored 196 goals and racked up 120 assists in a mere 76 games. As a result, Gretzky garnered much attention for his incredible skills; unfortunately, this sometimes drew resentment from the parents of other players, who accused him of being a “puck hog” and a show-off.

In the 1977–78 season, Gretzky started playing full-time in the OHL, with the Sault Ste. Marie Greyhounds. In his inaugural season, he shattered the rookie scoring record with 70 goals and 112 assists in 64 games. It was also in Sault Ste. Marie where Gretzky first donned number 99.

In 1978, Wayne Gretzky turned professional, signing with the Indianapolis Racers of the World Hockey Association (WHA). At age 17, he was the youngest athlete playing a major league sport in North America. However, he only played eight games with the Racers before being traded to the Edmonton Oilers (then part of the WHA). By the start of his second season with the Oilers, the WHA had merged with the National Hockey League (NHL) and it was not long before he took the league by storm.

In Edmonton's first season in the NHL (1979–80), Gretzky tied for the lead in scoring, won the Hart Trophy as the league's "most valuable player," won the Lady Byng Trophy and began an assault on scoring records that is likely unprecedented in any sport.

In his second NHL season (1980–81) Gretzky scored 164 points, breaking Phil Esposito's single-season record of 152 points and surpassing Bobby Orr's assist record of 102 with 109. The following year, he scored 212 points, including 92 goals — shattering Esposito's previous record of 76 goals. It was during this season that Gretzky famously set another NHL record by scoring 50 goals in just 39 games. He secured this feat with a five-goal performance against the Philadelphia Flyers on 30 December 1981. This record, like many of his others, is unlikely to be broken by a player in today’s game. Gretzky led the Oilers to four Stanley Cup championships in five years before being traded by team owner Peter Pocklington to the Los Angeles Kings in 1988 for cash and players.

Though unable to recreate the team success with the Kings that he enjoyed with the Oilers, Gretzky raised the profile of hockey in the United States dramatically, and his presence in Los Angeles is widely credited with the league's expansion throughout the American “sunbelt” (southern states) in the early 1990s.

In 1993, Gretzky resumed play after missing the first half of the season owing to a back problem and led the Kings to the Stanley Cup final, losing to the Montréal Canadiens but personally winning the playoff scoring title. He won his 10th scoring title in 15 NHL seasons in 1993–94 and scored his 802nd goal, breaking Howe's all-time goal scoring record. Financial difficulties with the Kings franchise, as well as Gretzky's own disenchantment with the club's lack of commitment to building a winning team, resulted in him being traded to the St. Louis Blues on 27 February 1996.

In the 1996 off-season Gretzky changed teams again, this time to join his ex-Oiler teammate Mark Messier by signing as a free agent with the New York Rangers. Even in the twilight of his career, Gretzky still put up impressive numbers. In his first season with the Rangers, he registered 97 points and was the team’s leading scorer in the 1997 playoffs, helping the team advance as far as the Conference Finals. The Rangers did not appear in the post-season again for almost a decade.

After three seasons with the Rangers, Gretzky announced his retirement at the age of 38. Amidst an immense public emotional outpouring he played his last game on 18 April 1999 at Madison Square Garden in New York City. The game ended with a 2–1 loss to the Pittsburgh Penguins but Gretzky still referred to it as his “greatest day in hockey.” Not long after, the NHL retired his number in recognition of his impact on the sport — no player would ever wear number 99 again.

Following his retirement, Gretzky became a minority owner and alternate governor for the NHL’s Phoenix Coyotes. He later became the team’s head coach in August 2005 and signed a lucrative five-year contract extension in May 2006. In his four seasons with the club, he coached the team to a 143–161–24 record.

As a relocation team, the Coyotes encountered significant financial troubles and in May 2009, team owner Jerry Moyes was keen to sell the franchise, which was hemorrhaging cash. Amidst this turmoil, Gretzky resigned from his role with the club in September. Moyes had hoped to sell the Coyotes — after filing for bankruptcy — to Blackberry magnate Jim Balsillie, who had plans to move the team to Hamilton, Ontario. The league, however, intervened and purchased the team from Moyes in November 2009, taking over the franchise until a suitable buyer could be found.

Following his departure from Phoenix, Gretzky had an acrimonious relationship with the NHL as he was still owed money from his time with the Coyotes, an issue that was not resolved until October 2013.

Gretzky’s first appearance on the international stage was the 1978 World Junior Championship in Montréal. At the age of 16, Gretzky was the youngest player in the tournament and led all scorers with 17 points. Canada placed third behind the Soviet Union and Sweden.

He was a part of the Canada Cup team in 1981 and the World Championship team in 1982, winning silver and bronze respectively. Gretzky later secured three gold medals at the Canada Cup in 1984, 1987 and 1991. He also played in the inaugural World Cup of Hockey tournament in 1996, in which Canada finished second to the United States.

Due to restrictions against professional hockey players, Gretzky was unable to play in the Olympic Winter Games until 1998. The Olympic Winter Games in Nagano, Japan, were the first in which NHL players were allowed to participate. Gretzky was part of the much heralded Canadian squad; however, the team did not live up to high expectations and failed to medal in the tournament.

Gretzky was named executive director of Team Canada's Olympic Hockey Team for the 2002 Games at Salt Lake City, Utah. Gretzky's prestige and leadership, and his insistence on securing a team that emphasized skill and speed, contributed greatly to Canada's first gold medal in men's hockey since 1952. He was again named executive director for the 2006 Olympics at Torino, Italy, but the team could not repeat its 2002 performance and did not make the podium. (See also Canadian Olympic Hockey Teams.)

Gretzky's accomplishments are arguably unparalleled in any sport: he won the Hart Trophy (most valuable player) nine times, the Art Ross Trophy (scoring championship) ten times, the Lady Byng Trophy four times and the Conn Smythe Trophy (outstanding player in a playoff) twice. He is the all-time leading scorer in the NHL with 2,857 points, and the only player to reach 2,000 career points, needing only 11 seasons to pass the record that took Gordie Howe 26 years to compile. He holds or shares an amazing 61 NHL records, including most goals (894) and most assists (1963). Gretzky’s assists alone are enough to make him the league’s all-time leading scorer. He tallied 382 career points in the playoffs, almost 100 more than any other player. He was the leading scorer in six international tournaments, including all four Canada Cup tournaments in which he played.

On 23 June 1999, two months after he retired, he was selected for induction into the Hockey Hall of Fame. He was only the 10th player for whom the normal three-year waiting period for induction after retirement had been waived. Other players who have received this special honour include Mario Lemieux (1997), Bobby Orr (1979), Jean Béliveau and Gordie Howe (1972), Maurice Richard (1961) and Dit Clapper (1947).

Gretzky was appointed Officer of the Order of Canada on 25 June 1984 but was not invested until 28 January 1998. In 2009, he was promoted to Companion of the Order. In 2012, he was among the first people to receive the Order of Hockey in Canada. In September 2016, the NHL named Gretzky its official ambassador for the league’s centennial celebrations in 2017.

Mixing business with his love of hockey, Gretzky bought the Hull Olympiques of the Quebec Major Junior Hockey League (QMJHL) on 7 August 1985. In his first season as owner, the Olympiques, guided by head coach Pat Burns, won the QMJHL championship. He sold the team in 1992.

In 1991, Gretzky and his business partners (comedian John Candy and Kings owner Bruce McNall) purchased the Toronto Argonauts, which went on to win the Grey Cup that year. They sold the club in 1994.

He also embarked on several entrepreneurial ventures following retirement, including No. 99 Estates Winery on the Niagara Peninsula and a restaurant in Toronto called "Wayne Gretzky's," which features some of his personal sports memorabilia.

Gretzky married Janet Jones on 16 July 1988. The couple has five children: daughters Paulina and Emma and sons Ty, Trevor and Tristan. He and his wife currently reside in southern California.

Wayne Gretzky's mastery of his sport owed much to his agility, speed and accurate shot, and he was undoubtedly the greatest passer in hockey history. But it was his instinctive grasp of the flow of play — his sense of how opposing players and teammates would react to each situation — that made him such a creative player. His impact on hockey and the void that he left behind were symbolized by the retirement of his number (99) in the NHL. His personal charm as well as his scoring feats have endeared him to the North American sporting public.