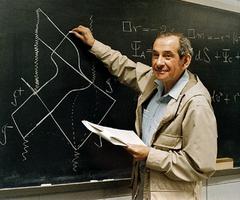 Physicist Werner Israel conjectures that black holes can be defined by a few parameters (courtesy University of Alberta/Lotus Studio).

Werner Israel, physicist (b at Berlin, Germany 4 Oct 1931). He was educated at the University of Cape Town, South Africa (BSc, 1951, MSc, 1954) and Dublin Institute for Advanced Studies (PhD, 1960). He came to U of A as an assistant professor in the Mathematics Department in 1958. Since 1972 he has been a professor of physics at U of A. His research encompasses several areas, including relativity theory, BLACK HOLES, cosmology, relativistic thermodynamics and quantum gravity. He is well known for his pioneering work on gravitational collapse, the concept of event horizon and the uniqueness of static black holes. He has also made important contributions to relativistic kinetic theory and the thermodynamics of black holes.

Werner has been recognized internationally for his contribution to the fields of relativity, gravitation, relativistic thermodynamics and cosmology by the award of the following prizes and fellowships: Fellow of the Royal Society of Canada (1972); Sherman-Fairchild Distinguished Scholar, CALTECH (1974-75); Canadian Association of Physicists Medal of Achievement in Physics (1981); University of Alberta Research Prize in Natural Sciences and Engineering (1983); Izaak Walton Killam Memorial Prize (1984); Fellow of the Royal Society, London (1986); Senior Research Fellow at the Canadian Institute for Advanced Research (1986-91);