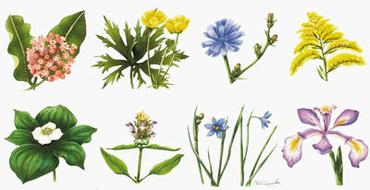 Wildflowers include all flowering plants growing without cultivation. In popular use. The term refers mainly to the numerous nonwoody (herbaceous) plants and smaller shrubs with showy flowers. Plants with inconspicuous, petalless flowers, eg, the grasses and the superficially similar sedges, are not usually recognized as wildflowers.

There are approximately 4000 species of flowering plants in Canada, of which about 3000 may be considered wildflowers. About one-quarter of these have been introduced from other regions of the world. These introduced weeds differ from most native wildflowers mainly in their ability to spread rapidly into disturbed habitats and agricultural lands.

Their prolific growth and often harmful or objectionable properties make many of them unwanted aliens. Some native wildflowers, such as milkweed (Asclepias) and locoweed (Oxytropis), can also be considered weeds since they commonly grow in fields and pastures in considerable numbers and may cause livestock poisoning.

The common names of many wildflowers (eg, locoweed) make reference to some property of the plant or its use by Native People and in folk medicine. Names such as may apple (Podophyllum), fairy-spuds (Claytonia), wild ginger (Asarum) and miner's lettuce (Montia) refer to the edible nature of the plant or its parts. Others like heal-all (Prunella), liverleaf (Hepatica) and toothwort (Dentaria) refer to a belief in the curative power of the plant, specific to the part of the body recorded in the name.

Some of the most widespread native wildflowers in Canada are the plants of the coniferous Boreal Forest. Within this broad belt, extending from Newfoundland to the YT, are found such common wildflowers as twinflower, mitrewort, bunchberry and Labrador Tea. Because of the relatively uniform conditions beneath this evergreen canopy throughout the growing season, no obvious displays of seasonal flowering occur.

Within the deciduous and mixed deciduous-coniferous forests of the Great Lakes and the St Lawrence River valley, an array of showy woodland wildflowers heralds the arrival of each new growing season. These perennial herbs, many of which are members of the lily, buttercup and saxifrage families, come to flower and set seed before the unfolding new leaves of the canopy overhead shade the forest floor. As summer progresses, the wildflowers of the forest clearings, meadows, river banks and lakes gradually come to flower. In the shortening days of fall, the numerous and sometimes confusing members of the daisy family (Asteraceae or Compositae), such as the asters and goldenrods, carpet the fields and pastures in a final splash of colour.

In central Canada, nearly all of the original prairie is now gone, plowed to accommodate expanding agricultural needs. The common grasses and characteristic wildflowers such as the prairie lily, blue-eyed grass and coneflower are now found mainly along roadsides and railway lines, or in coulees and sandy areas. The prairie crocuses, prairie lilies and wild roses have also proved adaptable.

The coniferous forests of the western mountains share many wildflowers with the boreal forest. Other flowers, such as Lyall's saxifrage and heartleaf arnica, are strictly alpine. Still others, such as the woolly fernweed, are arctic-alpine in distribution, eg, they range widely through the Arctic and extend southward throughout the mountains in suitable habitats.

Although both the dry, interior montane forest and the wet, coastal forest of BC have distinctive species of wildflowers, perhaps the showiest displays of western wildflowers occur in the alpine meadows. On sheltered slopes and in moist depressions fed by melting snow, lush growths of tall herbs flower in profusion, while on the drier rocky and turfy slopes and exposed ledges dwarfed rosette and cushionlike plants hug the ground and bask in the bright, high-altitude sunlight of the brief alpine summer.

Beyond the treeline, the number of flowering plants decreases rapidly to as few as about 300 species for all of the islands of the Arctic Archipelago. The most abundant growths of arctic wildflowers occur in sheltered and moist Tundra habitats, where the shallow soil is saturated with meltwater that has been prevented from draining by permafrost not far below the roots of the plants. Among the clumps of tundra grasses and sedges occur such plants as the arctic lupine, Lapland rosebay and arctic white heather.

Arctic wildflowers survive in the rigorous climate with its short summer by taking advantage of the nearly continuous daylight of the low arctic sun and the warm air temperatures close to the ground. In spite of this, many plants cannot always produce flowers and must rely on "vegetative growth," including the formation of bulbils in place of seeds, as in the nodding saxifrage, to ensure their continued survival. See also individual species entries.