William Arthur Scott Goss, photographer (born 4 March 1881 in London, ON; died 1 June 1940 in Toronto, ON). As the official photographer for the City of Toronto from 1911 to 1940, Arthur Goss produced over 30,000 photographs documenting a period of dramatic expansion in the city's history. These photographs are characterized by their realism and technical brilliance. An exponent of "pictorialism," in which photography was employed for artistic ends, Goss came into contact with many Canadian artists, like Lawren Harris, and his soft-lens portraits and landscapes received critical acclaim in Canada and abroad. In the end, Goss is best known for his documentation of the poor living conditions of immigrant families in early 20th century Toronto.

While Arthur Gross was born in London, Ontario, he actually grew up in Cabbagetown, a largely working class neighbourhood in the east end of Toronto. His father was a journalist and died in 1892. That same year, in order to help support his family, Goss took a job as an office boy in the City of Toronto’s Engineering Department. While it is not known how Goss learned his craft, by the age of 15 he had won an amateur photography contest. In 1911, he was hired by the City Works Department in a new division called the Photography and Blue Print Section as Toronto’s first chief photographer. Goss’s task was to document the expanding city’s infrastructure projects and urban growth. Over the course of his 30-year career, Goss documented, among other things, the laying down of the tracks of the Toronto Civic Railway (later the Toronto Transit Commission), the construction of the Prince Edward Viaduct (now the Bloor Viaduct), and the R.C. Harris Water Treatment Plant. Perhaps most importantly, Goss documented the poor living conditions of immigrant families and the impact of poverty on the health and welfare of children in impoverished areas of Toronto like St. John’s Ward for the Department of Public Health. 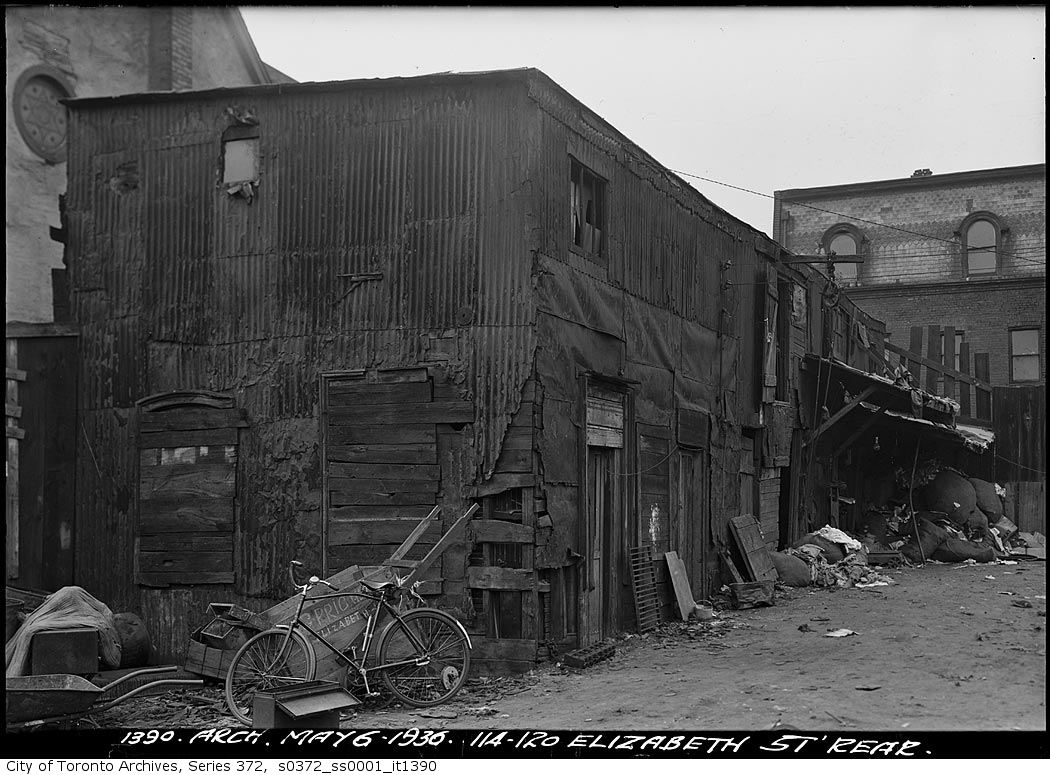 By 1911, St. John’s Ward or “The Ward” had been home to poor immigrants since the 19th century. Roughly occupying the area between University Avenue to the west, Yonge Street to the east, and College Street and Queen Street to the north and south, the area had a few notable buildings, such as Osgoode Hall, Old City Hall, the T. Eaton Factory and Warehouse, and (after 1909) the Toronto General Hospital, but it was largely slum housing and small shops. Early immigrants included African American slaves escaping along the Underground Railroad, Irish people fleeing the Irish Famine, and Eastern European Jews; the area also included Toronto’s original Chinatown. Goss was, in fact, not the first to photograph the area. British-Canadian photographer William James began a few years earlier, in 1910 and 1911, with works of remarkable precision and style.

Goss’s photographs of St. John’s Ward are moving and distinctive in part because of their intimacy. Rather than just photographing dilapidated buildings, or panoramas of the area from the higher buildings, he photographed people, often children, in their neighbourhood and often in the privacy of their homes. In Rear of Centre Street Houses in Winter (1912), for instance, two bundled up little kids stand in dirty snow in front of their diminutive and battered home, black chimneys visible on the buildings, the sky a flat grey. Slum Family (1913) has some six children, a mother and what one assumes is the grandmother packed into a tiny, congested kitchen, the mother nursing an infant. Rear 21 Elizabeth Street (1913) has a boy, a young student with a book under his arm, standing in an alley scattered with broken, discarded lumber, old City Hall visible behind.

Goss continued to photograph The Ward until the late 1930s. Attempts to redevelop the area began early in the century, with neighbourhoods expropriated and cleared wholesale in order to build new office towers, hotels, and apartment buildings. Nonetheless, the last time Goss photographed The Ward, in 1937, there were still traces of the old slums, which had been there for over 100 years. In Rear of 11 and 13 Centre Street (1937), for instance, one looks over rooftops patched together with ragged sheets of tarpaper to rickety, sagging wooden buildings; Old City Hall’s clock tower is visible in the background. The Ward did not completely disappear until the 1960s, when Chinatown moved to its current location on Spadina, the last of the old buildings were torn down, and there were developments like the new City Hall and Nathan Phillips Square. 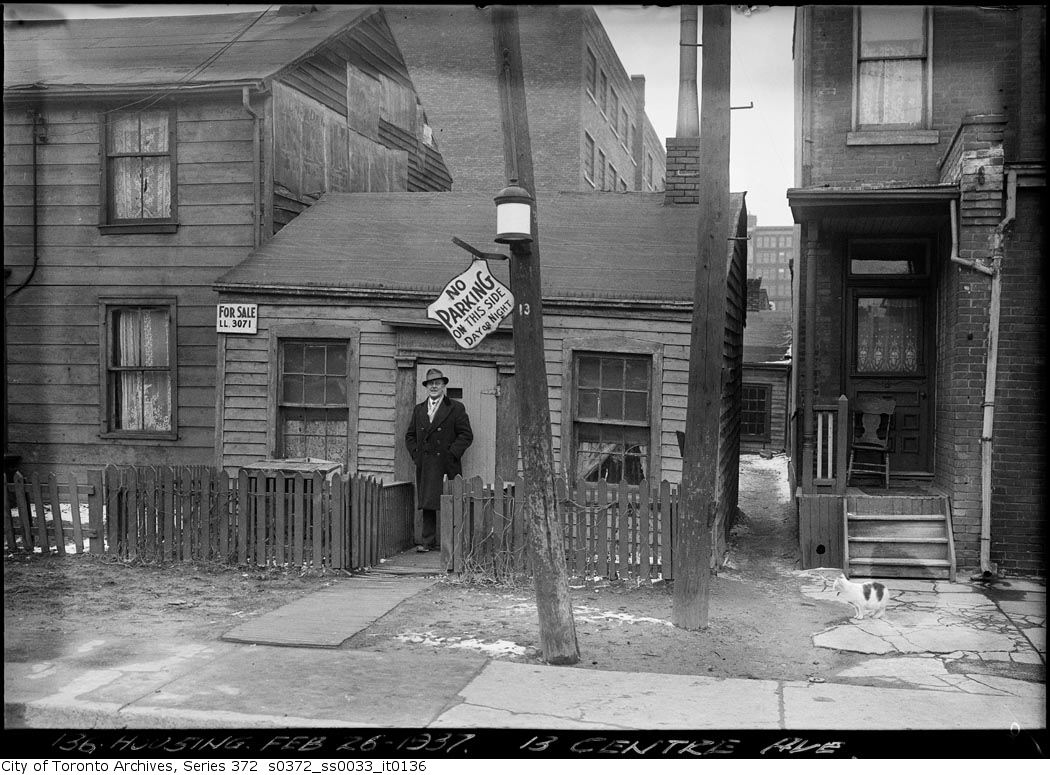 While Goss’s images of St. John’s Ward are among his most striking and memorable in part because they document a formative moment in the city’s immigrant heritage that has disappeared, as Toronto’s official photographer Goss took pictures of many different aspects of the evolving city. For example, his stunning, panoramic photographs of the construction of the Bloor Viaduct, from the chaotic beginnings in 1915, the workers walking amongst huge beams and piles of lumber and heaps of gravel, to long views of workers suspended along the elegant concrete railing of the nearly completed bridge. Other well-known pictures include his sinister pictures of workers deep inside the Rosedale Sewer in 1931 and images of the hulking iron skeleton of the R. C. Harris Water Treatment Plant, which was not completed until 1941. Goss also took photographs of the city’s cultural and social life, including the most famous photograph of the Group of Seven, shot in 1920. The image depicts the seven painters in soft, expressive, high contrast black and white at a table in the Arts and Letters Club. Another celebrated photograph portraying city life is his shot, taken in 1935, of kids enjoying a summer day at Leslie Beach, the lake in the background teeming with swimmers.

Although Goss was an employee of the City of Toronto and would not have thought of himself as either an artist or an activist, his finest work, especially the images of poverty in St. Johns Ward, have been compared to the work of significant documentary photographers of that era, like Jacob A. Riis and Lewis W. Hine. In addition, Michael Ondaatje used Goss’s images of early 20th-century working class Toronto, which are easily available in Toronto’s City Archives, as part of his research for his novel In the Skin of a Lion (1987). Though the novel is a work of fiction, Goss appears as a character. In one scene, Ondaatje describes Goss photographing workers building a tunnel under Lake Ontario. “Then Arthur Goss, the city photographer,” Ondaatje writes, “packs up his tripod and glass plates, unhooks the cord of lights that creates a vista of open tunnel behind the two men, walks with his equipment the fifty yards to the ladder, and climbs out into the sunlight.”