William “Torchy” Peden was born in Victoria, British Columbia. The Peden family had immigrated to Canada in the late 19th century from Scotland. His uncle, Alexander, was involved in municipal politics while his father, William (senior), was a businessman. By 1901, his father had opened a bicycle store in Victoria, where two of his uncles also worked. William later established Scott and Peden, Ltd., which sold flour, feed, hay and grain. 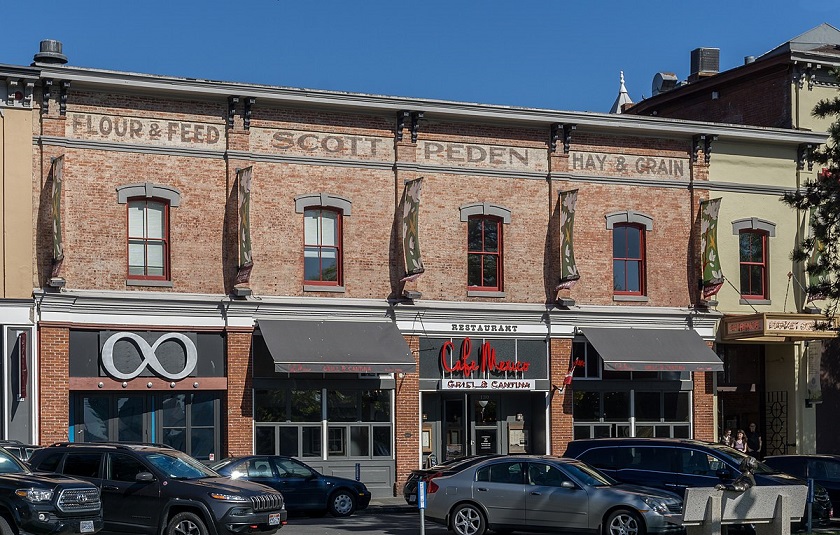 This building on Store Street, Victoria, British Columbia, still bears the old signage from the Scott and Peden Ltd., warehouse, which was established in the early 20th century.

Did You Know?
Victoria, British Columbia, has been home to some of Canada’s most successful cyclists. They include William “Torchy” Peden and his brother Doug Peden, as well as 2012 Giro d’Italia winner Ryder Hesjedal. Every year, during Ryder Hesjedal’s Tour de Victoria, hundreds of cyclists ride by the old Scott and Peden warehouse on Store Street, close to where the Swans Brewery Pub and Hotel now stands.


The Pedens were an active, athletic family. In addition to sports, they hiked and camped in the nearby hills in Sooke, where their father built a cabin and where Peden Lake now bears the family name. As a youth, William J. Peden participated in several sports, including cycling, rugby and hockey, and was a nationally ranked swimmer.

William “Torchy” Peden was determined to make the Canadian team for the 1928 Olympic Summer Games and decided that his best chance was in cycling. In 1925, he began intensive training, cycling 25 to 30 miles every evening after a full day’s work at the local logging camp.

The training paid off. In 1925, Peden won the ten-mile event at the Washington State championships. The following year, he won the 15-mile Moody Cup race in Victoria. In 1927, Peden was British Columbia’s two-mile champion, and in 1928, he won the Province newspaper’s bicycle road race.

It was around this time that he earned his nickname, “Torchy.” At 6’3” (191 cm) and 220 pounds (100 kg), Peden was an imposing figure on his bike. His speed and flaming red hair prompted one reporter to remark that he was a torch for other cyclists to follow.

To win a spot on the Olympic cycling team, Torchy Peden had to do well at the 1928 national championships in Toronto, which also served as the Olympic trials. Even before the trials began, there was a lot of interest in the “flaming thatched giant from Victoria.” On 26 May 1928, for example, the Toronto Daily Star reported that, “‘Torchy’ Peden, champion pedal-pusher of British Columbia, who is almost a certainty to make the Canadian Olympic team, will be given a great reception when he arrives tomorrow morning from the west at 8.40. Many of the wheeling fraternity will be down at the station to welcome him.”

Peden did not disappoint. He dominated the Canadian championships, winning the one-mile race, five-mile race and 4000m pursuit race.

At the 1928 Olympic Games, Torchy Peden competed in the individual and team time trials (road cycling), as well as the 4,000 m team pursuit (track cycling). His best result was in the team pursuit, where he and his teammates (Lew Elder, Jim Davies and Andy Houting) tied for fifth place.

However, the road race was disastrous for Peden. At the 1928 Amsterdam Games, the individual and team road races were held concurrently. The road race was a 168 km loop that started in Amsterdam and headed out to Scheveningen before returning. Each national team consisted of four cyclists, with the best three times counting toward the team time. Unfortunately, Peden was suffering from a case of food poisoning and sustained two punctures during the race. He finished 63rd, the final cyclist to set a time (12 cyclists, including teammate Lew Elder, did not finish). The combined times of Joseph Laporte (who finished 31st), Alfred Tourville (56th) and Peden (63rd) gave Canada 14th place in the team competition.

Did You Know?
Canada won its first Olympic medal in cycling at the 1908 Games in London, England. That year, William “Doc” Morton, Walter Andrews, William Anderson and Frederick McCarthy took bronze in the team pursuit (track cycling). Canada would not earn another Olympic medal in cycling until the 1984 Games in Los Angeles, when Curt Harnett captured the silver in the 1 km time trial and Steve Bauer won silver in the 190 km road race.

Determined to prove himself, Torchy Peden stayed on in Europe after the 1928 Olympic Games and joined the European cycling circuit with his Olympic teammate, Lew Elder. The pair competed in some of the world’s most prestigious races in France, Poland, England and Scotland.

Peden returned to Canada in 1929 and dominated the Canadian indoor track cycling championships in Montreal, winning the half-mile, mile, two-mile and five-mile events and claiming the overall title.

His performance at the 1929 national championships drew the attention of race promoter Willie Spencer, who convinced Peden to turn professional. On 15 June 1929, he won his first professional race — the first of many victories.

On 26 June 1929, for example, the Toronto Daily Star reported that Peden and teammate Jules Matton of Montreal had won a 25-mile professional team race at the Dundas Street Cyclodrome in Toronto:

It was Maple Leaf night at the Cyclodrome last evening when Torchy Peden and Jules Matton of Victoria and Montreal respectively, not only won the professional twenty-five mile team race but lapped their formidable rivals.

It was the first time that the trick had been done this season in any of the long events which are so popular with the patrons of the Dundas St. ‘drome and to the fiery headed ankler from the coast who represented Canada in the Olympic games and who since his graduation to the monied ranks has more than held his own with Willie Spencer’s stable must go the lion’s share of the credit. Peden didn’t spare himself at any stage of the long journey but went out to make a real race of it, not a loaf with some sprints thrown in at intervals for good measure. As a result the others were dead on their wheels toward the end and when in collaboration with the Montreal plugger, Peden opened up in deadly earnest the combination by judicious changing, shook off all opposition.

The distance was ridden inside of one hour, 59 minutes and 29 1-5 seconds to be exact, making a record for the saucer.

Torchy Peden is best known for his success in six-day racing. Known as the “race to nowhere,” the six-day race usually started early Monday morning and ended the following Saturday evening. Competitors rode laps around an oval track known as a bicycle “saucer,” with sides that were banked up to 60 degrees. The cyclists rode in teams of two — while one member of the team rode, the other rested. For much of the time, they rode in single file at a moderate pace, until someone sprinted away from the group and the others raced to catch up. Victory went to the team that had ridden the farthest distance and stolen the most laps by the end of the sixth day. In total, riders were on the track for 143 hours and covered about 2,000 miles.

This unusual sport was very popular during the 1930s and could be quite lucrative for both race promoters and competitors. Fans could stay all day (and night) if they wanted, an affordable diversion during the Depression. Jazz bands played, while socialites, businessmen and factory workers mingled, smoked and gambled on the race results.

The sprints were the most exciting part of the six-day race. Crashes were common, and Peden himself broke several bones over the course of his career. However, he was also fast — and funny. To break up the monotony and keep the fans entertained, riders often played to the crowd. Peden was a stand-out not only for his size and speed, but also his clowning — sometimes steering with his feet or reading a newspaper while riding or stealing a hat or scarf from spectators and wearing it for a few laps before returning the item to its owner.

Peden was one of the best known and most successful six-day racers of the 1930s. In his first four years, Peden won 24 of 48 races. At his peak, he reputedly made as much as $50,000 a year — a considerable income during the Depression. He was one of the highest-paid athletes of the era, along with baseball players Babe Ruth and Lou Gehrig. In 1938, CCM presented Peden with a gold-plated version of his famous bicycle, the CCM Flyer. 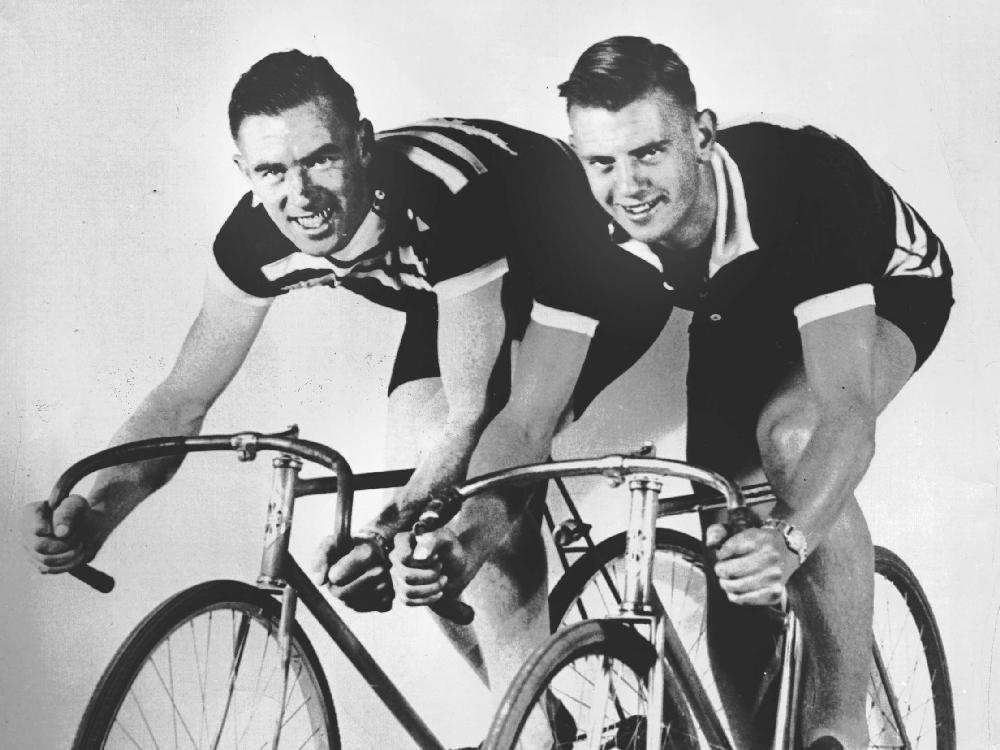 Torchy Peden coached the Canadian cycling team that competed in the 1932 Olympic Summer Games in Los Angeles. Like Peden, three of the eight competitors came from Victoria, British Columbia. In 1936, he was one of the track team coaches at the Olympic Summer Games in Berlin. His brother, the multitalented Doug Peden, won a silver medal in basketball at the same Olympic Games. 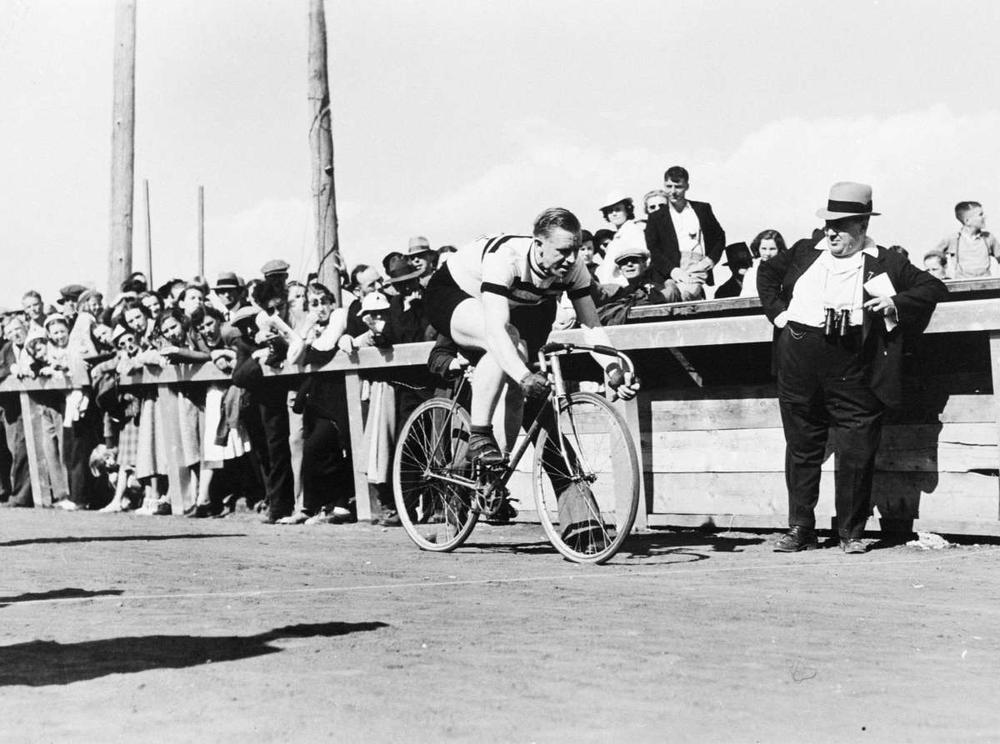 During the Second World War, Torchy Peden was a physical instructor with the Royal Canadian Air Force. “You can believe me when I say it kept me in shape,” he told a Toronto Daily Star reporter, “because I’d take five different groups on runs of from five to seven miles every day, in addition to calisthenics and other events.” Peden returned to racing following the war but rode his last professional race in November 1948, retiring at the age 42. Over the course of his career, he had competed in 148 races, finishing 145 and winning 38.

By the time he retired, six-day racing was no longer popular among North American spectators. Peden tried to reignite interest in the sport but was unsuccessful, despite having spent most of his savings building a reusable, portable track made of Masonite and steel (an improvement on the old wooden cycling tracks).

Peden moved to the United States and eventually settled in Northbrook, Illinois, where he ran a sporting goods store and sold ice skates to members of the NHL Blackhawks team such as the legendary Bobby Hull. In 1952, he became a sales representative for CCM. He died in Chicago in 1980.