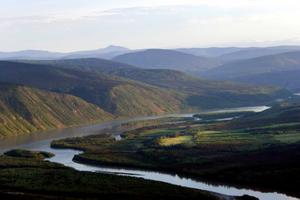 At 3,185 km (1,149 km of which lie in Canada), the Yukon River is the fifth-longest river in North America. Its headwaters are in the northwest corner of British Columbia, at the province’s border with the Yukon. It flows north and northwest across the Yukon into Alaska, then west to Norton Sound on the Bering Sea. Within the large central plateau of the Yukon, ringed by the Mackenzie Mountains to the east and the St. Elias range to the southwest, the Yukon River and its tributaries form the region’s dominant drainage basin.

In Canada, four principal tributaries feed the Yukon River: the Teslin River, the Pelly River, the White River and the Stewart River. In Alaska, the major tributaries are the Porcupine, Tanana and Koyukuk rivers.

The Yukon is a slow-moving, braided stream, and is shallow except when swollen by spring waters. It can be subdivided into two regions: upstream of its confluence with the Porcupine the river rises modestly, but over the remaining 1,600 km to the Bering Sea it’s relatively flat. From Fort Selkirk to Dawson, the Yukon is sprinkled with wooded islands, and its long, wide stretches are bordered by mountains. Past Dawson, the valley becomes narrow and then, as it enters Alaska, widens into the broad interior plateau called the “Yukon Flats.”

Compared to similar-sized river basins in more moderate climates, there are fewer fish species found in the Yukon River, and fewer plant and animal species along the river banks. The major fish species include Arctic grayling, an important sport fish, Dolly Varden (trout), inconnu, burbot, cisco and three species of salmon: chum, coho and chinook. Chinook are found from the mouth of the Yukon River to its headwaters. Some never leave freshwater environments, but most return to the mouth of the Yukon River from the Bering Sea in late spring and early summer, entering Canadian waters in mid to late July. Rainbow trout were introduced at Jackson Lake in the 1950s but have colonized the watershed relatively slowly.

The shores of the river are dominated by alpine tundra in the upper basin and boreal forest elsewhere. Spruce, lodgepole pine, balsam poplar, trembling aspen and white birch all border the river’s main stem, with alder and willow species found closest to the water. Birds and mammals, including bald eagles, and brown and black bears, prey on fish living in the river and are critically important to the river’s food webs. Other species, most notably beaver, muskrat and moose, build lodges, burrows and dams, and consume plant life along the shores of the Yukon. Smaller invertebrates that live in the river include mussels, clams, snails and many different insect species.

In Canada, the Yukon River and its headwaters traverse the territories of the Tr'ondëk Hwëch'in, Tutchone, Tagish and Tlingit. In turn, the river is central to Indigenous cultural landscapes. The story cycle of the Athapaskan hero Tachokaii (“the Traveller”) tells of the making of both the river and time itself. According to these stories, the birchbark canoe was created on the shores of the river, where it widens into the south end of Lake Laberge. In addition to the canoe, Indigenous people also travelled the river with mooseskin boats and rafts that could carry entire households.

Chinook and chum salmon migrate up the Yukon River in two separate summer runs. To harvest fish from these runs, Indigenous people would move to fish camps in the late spring and early summer. Using stones to hammer in the posts, they built fish weirs that trapped the salmon, forcing them to swim along the length of the weir looking for a way through. Where the weir opened, fish baskets would capture the salmon. One of the most important historical fish trap locations for the Selkirk people (or Northern Tutchone) was on an island at Three Way Channel. Sometime in the late 19th century, the Yukon River shifted its course, leaving the site too dry for fishing.

These Indigenous communities had extensive trade networks that predated the arrival of Europeans in the late 18th century, when the Russian-American Company established trade posts in Alaska. The Hudson’s Bay Company arrived in the mid-19th century, establishing Fort Yukon at the junction of the Porcupine and Yukon rivers in 1847, and Fort Selkirk a year later at the junction of the Yukon and the Pelly. Shortly after the Alaska Commercial Company established Fort Reliance in 1874, they introduced steamboats onto the Yukon River.

In the mid-1880s, prospectors and miners arrived in the river’s watershed. Beginning in 1885, a series of gold strikes foreshadowed the 1896 find on Bonanza Creek, which in turn led to the Klondike Gold Rush. The gold rush transformed the Yukon and the river, greatly increasing steamboat traffic and the number of newcomers. Although the main mining operations were on tributaries of the Yukon River, Dawson City — the territory’s principal settlement — was at the confluence of the Klondike and the Yukon. Just south of Dawson City was Tr’ochëk, an ancient Tr'ondëk Hwëch'in fish camp. Miners purchased dwellings from the Tr'ondëk Hwëch'in at Tr’ochëk, and the sawmills and rafted logs that came with their settlements began to damage the salmon fishery. Under the leadership of Chief Isaac, the Tr'ondëk Hwëch'in moved to Moosehide, 5 km downstream.

Sternwheelers continued to operate, serving the smaller population that stayed on at Dawson City after the gold rush. When the Alaska Highway was completed in 1942 it reoriented the activity in the central Yukon away from the river.

Whitehorse, situated on the Yukon River, became the capital of the territory in 1953, and shortly thereafter construction began on a hydroelectric dam at the White Horse Rapids (for which the community was named). The power plant opened in 1958 and continues to supply electricity to the city. A 366-metre-long wood and concrete fish ladder was constructed to help migrating salmon bypass the dam to get to their spawning beds.

The river remains central to Indigenous cultural landscapes in the Yukon and also serves as a popular tourist destination for those interested in wilderness canoe trips. Many visitors paddle down the river each year to the Dawson City Music Festival and the biannual Moosehide Gathering.

Since the late 20th century, climate change has caused river ice to break up earlier in the spring, sometimes aggravating natural hazards like ice-jam floods, which have historically caused damage in Dawson City. Each fall Whitehorse discharges its treated sewage into the Yukon River, where it joins waste waters from smaller communities such as Dawson. Elevated contaminant levels have been found in fish in Lake Laberge, notably lake trout, burbot and northern pike; however, these contaminants are thought to originate from distant sources.

The land surface area surrounding a river, typically bounded by higher elevations, where all of the rainfall or snowmelt flows into that river.

The average volume of water that flows out of the river over a specific unit of time, usually cubic metres per second. The average is calculated for the entire year, but there are months when flow is naturally higher or lower.

A river or stream that flows into a larger river. The point at which the two rivers meet is called the confluence.