The Seven Years’ War (1756–63) was the first global war. In North America, Britain and France fought each other with the help of Indigenous allies. At the end of the war, France gave Canada (Quebec) and Ile Royale (Cape Breton) to Britain, among other territories. This is the reason that Canada has a British monarch but three founding peoples — French, British and Indigenous.

Leo, the Royal Cadet. A Canadian 'military' opera in four acts, written in Kingston, Ont. The libretto is by George Frederick Cameron (1854-85) and the music, for chorus, 16 solo voices, and orchestra, was composed ca 1889 by Oscar Ferdinand Telgmann.

The Battle of the Plains of Abraham (13 September 1759), also known as the Battle of Quebec, was a pivotal moment in theSeven Years’ Warand in the history of Canada. A British invasion force led by GeneralJames Wolfedefeated French troops under theMarquis de Montcalm, leading to the surrender ofQuebecto the British. Both commanding officers died from wounds sustained during the battle. The French never recaptured Quebec and effectively lost control ofNew Francein 1760. At the end of the war in 1763 France surrendered many of its colonial possessions — including Canada — to the British.

The Second World War was a defining event in Canadian history, transforming a quiet country on the fringes of global affairs into a critical player in the 20th century's most important struggle. Canada carried out a vital role in the Battle of the Atlantic and the air war over Germany and contributed forces to the campaigns of western Europe beyond what might be expected of a small nation of then only 11 million people. Between 1939 and 1945 more than one million Canadian men and women served full-time in the armed services. More than 43,000 were killed. Despite the bloodshed, the war against Germany and the Axis powers reinvigorated Canada's industrial base, elevated the role of women in the economy, paved the way for Canada's membership in NATO, and left Canadians with a legacy of proud service and sacrifice embodied in names such as Dieppe, Hong Kong, Ortona and Juno Beach.

The First World War of 1914–1918 was the bloodiest conflict in Canadian history, taking the lives of nearly 61,000 Canadians. It erased romantic notions of war, introducing slaughter on a massive scale, and instilled a fear of foreign military involvement that would last until the Second World War. The great achievements of Canadian soldiers on battlefields such as Ypres, Vimy and Passchendaele, however, ignited a sense of national pride and a confidence that Canada could stand on its own, apart from the British Empire, on the world stage. The war also deepened the divide between French and English Canada and marked the beginning of widespread state intervention in society and the economy.

The Newfoundland Regiment at Beaumont-Hamel

The Newfoundland Regiment at Beaumont-Hamel

On 1 July 1916, Allied forces launched a major offensive in France during the First World War. The opening of the Somme offensive turned into one of the deadliest days in the history of modern warfare. At the village of Beaumont-Hamel, the Newfoundland Regiment suffered catastrophic losses. More than 80 percent of the soldiers who advanced that day were either killed or wounded. In one morning, the regiment suffered approximately 700 casualties, including more than 300 dead.

Arctic sovereignty is a key part of Canada’s history and future. The country has 162,000 km of Arctic coastline. Forty per cent of Canada’s landmass is in its three northern territories. Sovereignty over the area has become a national priority for Canadian governments in the 21st century. There has been growing international interest in the Arctic due to resource development, climate change, control of the Northwest Passage and access to transportation routes. As Prime Minister Stephen Harper said in 2008, “The geopolitical importance of the Arctic and Canada’s interests in it have never been greater.”

Canada is a constitutional monarchy. As such, there is a clear division between the head of state and the head of government. The head of government is the prime minister, an elected political leader. The head of state is the Canadian monarch. Their duties are carried out by the governor general, who acts as the representative of the Crown — currently Elizabeth II — in Canada. (Lieutenant-Governors fulfill the same role in provincial governments.) The governor general performs a wide array of ceremonial duties. They also fulfill an important role in upholding the traditions of Parliament and other democratic institutions. Inuk leader Mary Simon was formally installed as Canada’s 30th Governor General on 26 July 2021. She is the first Indigenous person to hold Canada’s vice-regal position.

Billy Bishop Goes to War is a musical written by John MacLachlan Gray with Eric Peterson about the exploits of First World War flying ace William Avery "Billy" Bishop. Since its premiere in 1978, the musical has been staged across Canada and in the United States and Europe. It remains one of the most popular Canadian musicals.

Conscription is the compulsory enlistment or “call up” of citizens for military service. It is sometimes known as “the draft.” The federal government enacted conscription in both the First World War and the Second World War. Both instances created sharp divisions between English Canadians, who tended to support the practice, and French Canadians, who generally did not. Canada does not currently have mandatory military service. The Canadian Armed Forces are voluntary services.

The Military Service Act became law on 29 August 1917. It was a politically explosive and controversial law that bitterly divided the country along French-English lines. It made all male citizens aged 20 to 45 subject to conscription for military service, through the end of the First World War. The Act’s military value was questionable, but its political consequences were clear. It led to the creation of Prime Minister Borden’s Union Government and drove most of his French-Canadian supporters into opposition.

The Battle of the Plains of Abraham and the capitulation of Quebec City in 1759 made the strategic situation of New France desperate. Despite a victory at the Battle of Sainte-Foy, the French forces found themselves isolated in Montreal by the British. The French commander, François-Gaston de Lévis, wanted to continue the fight. However, to avoid a pointless loss of life, the Governor of New France, Pierre-Rigaud de Vaudreuil, decided to surrender the city. With the capitulation of Montreal to the British forces on 8 September 1760, Great Britain completed its conquest of New France.

The Last Post Fund is a nonprofit organization established in 1909. The organization’s mission is to ensure a dignified funeral and burial, as well as a military-style gravestone, to all eligible veterans. The fund is closely linked to Veterans Affairs Canada. 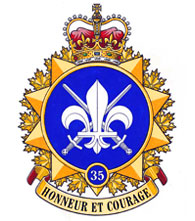 35 Canadian Brigade Group (35 CBG) is a formation of the Canadian Army Reserve. There are 12 units in the group, including armoured, artillery, engineer, signals, infantry and logistics units. The units are based in Eastern Quebec. Brigade Group headquarters is located in Quebec City, Quebec. In total, 35 CBG includes about 2,200 reservists and 60 members of the Regular Force.

The Royal Canadian Naval Air Service (RCNAS) was formed during the closing months of the First World War to help counter the German U-boat threat on Canada’s East Coast. It was disbanded after only three months of existence. A Canadian naval air service was not created again until after the Second World War.

The Canadian Aviation Corps was formed in September 1914, immediately after the start of the First World War. The three-person, one-plane unit sailed to Britain with the First Canadian Contingent in early October 1914 but never saw active service. The CAC was disbanded in May 1915. Canada would not have a permanent air force until 1924 (see Royal Canadian Air Force).

The Great War in the Air

The Great War in the Air

Airplanes became an important part of modern warfare during the First World War (1914–18). Aircraft technology developed rapidly and by war’s end, airplanes were involved in reconnaissance, artillery spotting, air-to-air combat, strafing ground targets, anti-submarine warfare, tactical and strategic bombing and home defence. More than 20,000 Canadians served in British flying services (Royal Flying Corps, Royal Naval Air Service and Royal Air Force) during the war. Approximately 1,400 were killed or died from wounds or accidents. Canada did not have an air force during the First World War; a single-plane Canadian Aviation Corps was established in 1914, but never saw service and soon disbanded. Later, on 5 August 1918, two Canadian Air Force squadrons were formed in Britain, but were disbanded the next year when the British cut off funding. The Royal Canadian Naval Air Service was formed in September 1918 but lasted only three months before the war ended. Canada would not have a permanent air force until 1924 (see Royal Canadian Air Force).