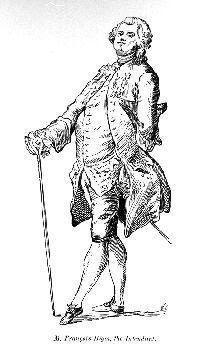 François Bigot, financial commissary of Île Royale 1739–1745, intendant of New France 1748–1760 (baptized at Bordeaux, France on 30 Jan 1703; died at Neuchâtel, Switzerland on 12 Jan 1778). Traditionally, Bigot has been remembered for administrative fraud so massive as to cause the Conquest of New France by the British during the Seven Years' War. His legacy is, however, more nuanced as the colony’s economic issues went far beyond Bigot’s own corruption.

As a young man, François Bigot served in the French Ministère de la Marine. In 1739, he was dispatched to Louisbourg. There, he organized the fortress’ logistics and administration. His preparations were put to the test when war was declared in the spring of 1744 (see War of the Austrian Succession). In December 1744, he and the other senior officials had to contend with a mutiny from the Louisbourg garrison. A few months later, the British blockaded and besieged Louisbourg. The fortress surrendered in June 1745.

Bigot was sent back to France, but he was not to stay very long. Instead, he was attached to an expedition to retake Louisbourg. The expedition failed as storms and sickness ravaged the ships and crews.

Despite the defeat at Louisbourg, François Bigot was sent back to Canada in 1748 as intendant. He was to assume chief responsibility for the civil government of New France. This was against his personal wishes. Bigot would, in fact, have preferred to stay in France, but he ultimately resigned himself to the task.

In 1750, Bigot encouraged Indigenous peoples and Acadians to rise up against the British occupiers. Fearing potential disloyalty, British authorities deported many Acadians away from their homeland. (See History of Acadia.)

Bigot’s management of the colony’s economy was lackluster. This was worsened by his corruption. Merchants began to complain that only Bigot's friends were receiving contracts to supply the government. Recalled to France in 1754 to answer these charges, his explanations apparently were satisfactory, since he was reassigned to Canada in 1755.

By 1759, the colony’s economic state was dire. Wartime inflation coupled with Bigot’s own corruption had led to serious food shortages.

Due to the Seven Years' War, government spending in Canada multiplied by five between 1755 and 1759. The French government believed that François Bigot and his associates (see Grande Société) stole much of the money. Following a show trial in Paris, referred to as the "Affaire du Canada," Bigot was sentenced to restore 1.5 million livres to the French Crown in 1763. Some of the money was repaid through the confiscation of some of his property. Bigot ended his days in relative poverty and disgrace in exile in Switzerland.

Ever since, historians have debated the degree to which Bigot's corrupt dealings were criminal. The recent consensus is that his behaviour was typical of the period and that skyrocketing expenditures resulted from the war and the British blockade. Nonetheless, for the French government, Bigot made for a convenient scapegoat for the fall of New France.

Bigot was a fairly able administrator. However, his legacy was stained by his corruption and his extravagant banquet lifestyle — both of which were the norm for the French upper classes.