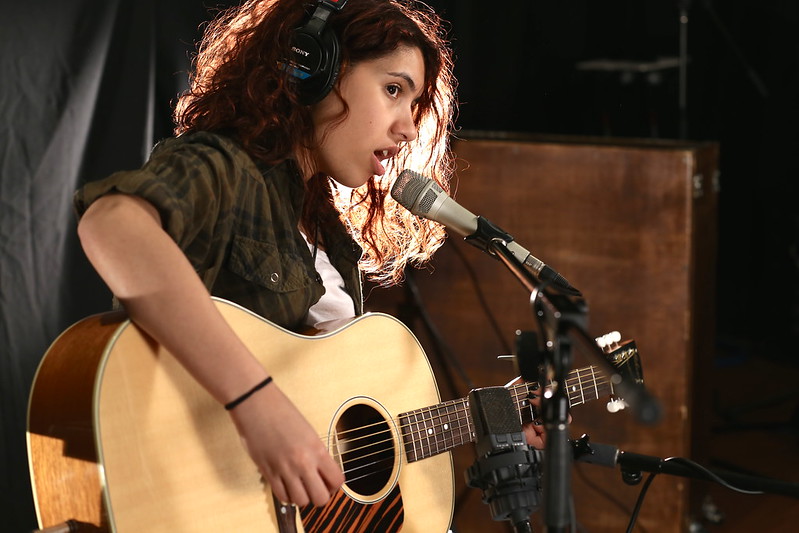 Alessia Cara was born and raised in Brampton, Ontario, where she attended Cardinal Ambrozic Catholic Secondary School. Her father is a first generation Italian Canadian. Her mother immigrated to Canada after meeting and marrying her father in Italy. Alessia grew up speaking Italian at home and listening to both North American and Italian pop music. She participated in such artistic activities as theatre, drama, writing poetry and singing. “Singing was something I always did,” she told Teen Vogue in 2015. “I really don’t remember a time when I wasn’t singing, even as a little child. I first picked up a guitar when I was 10 years old; my parents surprised me with it for my 10th birthday. I started taking lessons when I was 13, but only for a few months, and then I just kept teaching myself.”

When she was 13, Cara created her own YouTube channel and began posting clips of herself covering various songs, including some by her hero and biggest influence, Amy Winehouse. Three years later, in 2013, Cara was discovered by Tony Perez, founder of the record label EP Entertainment, after his daughter brought Cara’s cover of The Neighborhood’s “Sweater Weather” to his attention. But even after signing with EP and being paired with writing partner Sebastian Kole, the shy and introverted Cara kept the news to herself and her family, choosing to focus on finishing high school while launching her career. “The hardest part about it was trying to sneak around and juggle school and the studio at the same time,” she told Paper magazine in 2015. “I still wanted to experience high school in its entirety. I always knew music was going to be my Plan A, and everything other than that would be settling. Deep down I was praying for a shot at this.”

In 2014, Cara signed with Def Jam records, which teamed her with producers Pop & Oak (Nicki Minaj, Rihanna, Ariana Grande). On 27 April 2015, the label released Cara’s debut single, “Here,” which was inspired by her experience of feeling isolated and alone at a party. The song, which samples Isaac Hayes and Portishead, was streamed more than 500,000 times in one week on The Fader. It was also a hit on Spotify’s viral chart and drew attention from such publications as Billboard and Chatelaine. Spin’s Harley Brown called the song “a richly textured vignette,” while Rolling Stone ranked it No. 21 on its list of the 50 best songs of 2015. “Here” spent 34 weeks on the Billboard Hot 100 chart, peaking at No. 5. It was eventually certified triple platinum in both the US and Canada. (See also Music Canada Sales Certifications.)

While “Here” was climbing the charts, Def Jam released Cara’s five-song EP Four Pink Walls on 26 August 2015. It includes “Here” as well as four other original songs, for which Cara shot her own music videos, selfie-style. MTV’s Loren Diblasi wrote that the EP “runs the full gamut of influences, from contemporary pop and electro to vintage soul. Throughout, Cara's voice is dreamy while still maintaining that gritty texture we've grown to love.”

The EP received generally positive reviews, with an average score of 74/100 on the aggregator Metacritic. Rolling Stone’s Brittany Spanos gave the album 3.5 stars and wrote, “The R&B slow-burners and bouncy pop jams on 19-year-old Canadian singer Alessia Cara's debut EP feel more like a personal manifesto than a party playlist.” Exclaim!’s Michael J. Warren gave the record a rating of 7/10 and wrote that “Cara’s strengths lie in her anti-pop star polish and self-determined presentation, which are reflected strongly in her songwriting.” Paper magazine dubbed Cara “the pop star who’s making introversion cool.”

Cara made her network television debut with a performance of “Here” on The Tonight Show Starring Jimmy Fallon on 29 July 2015. Four Pink Walls peaked at No. 11 on Billboard’s Canadian albums chart and at No. 31 on the Billboard 200 album chart.

Cara’s debut LP, Know-It-All, followed hot on the heels of Four Pink Walls and “Here.” Released on 13 November 2015, the album features all five tracks from Four Pink Walls along with five new original songs cowritten by Cara and produced by Pop & Oak and Sebastian Kole, among others. The album yielded the hit singles “Wild Things,” which peaked at No. 50 on the Billboard Hot 100 and was certified gold in the US and triple platinum in Canada, and the self-acceptance anthem “Scars to Your Beautiful,” which reached No. 8 on the Hot 100 and was certified double platinum in the US and platinum in Canada.

Know-It-All was generally well received by critics, scoring 70/100 on Metacritic. Billboard’s Clover Hope called it “a debut album featuring a strong sense of adolescent idealism and a spoonful of smart cynicism,” while Exclaim!’s Ryan B. Patrick called it “a dynamic expression of popular music, filtered through a lens of adolescent angst and determinism.” The New York Times’ Jon Pareles wrote that the album was defined by “artfully awkward sincerity.” In a dissenting opinion, Pitchfork’s Jonah Bronwich rated the album 5/10, criticized its “bland, vaguely ‘rebellious’ lyrics” and wrote that “Cara’s appealing personality is sometimes hard to unearth from under the layers of pop gloss that have been poured on top of her.” However, he also noted that “the seeds are there for the future if she (or her label) let her rawer instincts breathe.”

Cara won two MTV Video Music Awards in 2017: Best Fight Against the System (“Scars to Your Beautiful”) and Best Dance Video (“Stay”). She was also nominated for four 2018 Grammy Awards and won for Best New Artist.

Like her previous efforts, The Pains of Growing was generally well-received by critics, with a rating of 72/100 on Metacritic. Beth Bowles of Exclaim! wrote that, “At only 22 years old, Cara doesn't feel gimmicky, nor like an over-produced product of a record label. She's raw and pure, an obvious example of an artist who will only continue to build momentum.” NME’s Nick Levine called The Pains of Growing “a winningly authentic second album that proves she's increasingly unforgettable.”