Anna Mae Pictou Aquash, Indigenous activist, homicide victim (born 27 March 1945 in Shubenacadie, NS; died December 1975 on the Pine Ridge Indian Reservation, South Dakota). A member of the militant American Indian Movement (AIM) in the United States during the 1970s, Aquash was murdered in 1975, triggering a 35-year investigation that culminated in the conviction of two fellow AIM members. Today, Aquash is a symbol of the injustices suffered by Indigenous women within their own communities.

Anna Mae Pictou Aquash, Indigenous activist, homicide victim (born 27 March 1945 in Shubenacadie, NS; died December 1975 on the Pine Ridge Indian Reservation, South Dakota). A member of the militant American Indian Movement (AIM) in the United States during the 1970s, Aquash was murdered in 1975, triggering a 35-year investigation that culminated in the conviction of two fellow AIM members. Today, Aquash is a symbol of the injustices suffered by Indigenous women within their own communities. This article contains sensitive material that may not be suitable for all audiences. 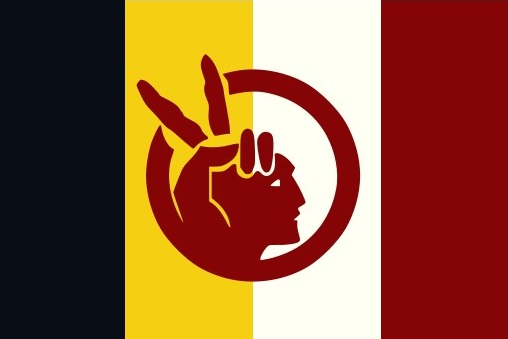 Anna (Annie) Mae Pictou was born on the Indian Brook Reserve (now First Nation), a small Mi’kmaw community in Shubenacadie, Nova Scotia. (See also Reserves in Nova Scotia.) Her mother, Mary Ellen Pictou, lived on welfare and worked odd jobs as a housekeeper to support Anna Mae and her two older sisters, Rebecca and Mary. Anna Mae’s father, Francis Levi, worked in logging camps in Maine. In 1949, their mother remarried and the family moved to the Pictou Landing reserve on Nova Scotia’s Northumberland Strait, where Anna Mae spent much of her childhood.

Anna Mae attended schools in Pictou Landing and in Shubenacadie, where she returned as a teenager following her stepfather’s death from cancer. When Anna Mae was 16, her mother abandoned the family, and Anna Mae soon left Nova Scotia for Maine to work seasonally as a farm labourer. Rather than return to the poverty of Indian Brook, she went to Boston with another Mi’kmaw named Jake Maloney — joining many other Maritimers in the 1960s and 1970s who migrated to Boston in search of employment.

In 1965, Anna Mae and Jake married. They had two daughters, Denise and Deborah, and lived together in Boston until their marriage dissolved a few years later. By this time, Anna Mae was involved in the Boston Indian Council, helping urban Indigenous people deal with addictions and unemployment. (See also Indian.) Intelligent and hard-working, she attended Boston’s Wheelock College as a mature student. She was offered a scholarship to Brandeis University, but turned it down to care for her daughters and to continue her community work in Boston’s low-income neighbourhoods, promoting Indigenous welfare and traditional culture.

By the early 1970s, Anna Mae was a follower of the American Indian Movement (AIM), a protest group asserting Indigenous rights in the United States. One of the many anti-establishment movements of the time, AIM was fronted by a pair of charismatic leaders, Russell Means and Dennis Banks — described by the Los Angeles Times as the “two most famous Indians since Sitting Bull and Crazy Horse.” (See also Indigenous Political Organization and Activism in Canada.)

In 1972, Anna Mae and others in her circle in Boston participated in AIM’s Trail of Broken Treaties march on Washington DC, which culminated in AIM’s occupation of the Bureau of Indian Affairs building. The following year, Anna Mae left her daughters in the care of her sister in Boston and travelled to the Lakota Pine Ridge Indian Reservation in South Dakota, to join AIM activists who had occupied the village of Wounded Knee.

Wounded Knee is an important, historical symbol for Indigenous people in the United States, the site of an infamous massacre of the Sioux by the US Cavalry in 1890. Nearly a century later in 1973, a band of about 200 AIM militants entered the Pine Ridge Reservation and occupied Wounded Knee, to protest a variety of grievances. A 10-week armed standoff ensued between the occupiers and government forces, including the National Guard.

Anna Mae arrived in the midst of the siege with her boyfriend from Boston, Nogeeshik Aquash (Chippewa, from Ontario ) — whom she would marry in a Sioux ceremony at Pine Ridge. Anna Mae Aquash, as she was then known, refused to accept the male-dominated, hierarchical social order within AIM. Upon arriving at the Pine Ridge camp and being ordered by AIM leader Dennis Banks to help other women on kitchen duty, Aquash replied: “Mr. Banks, I didn’t come here to wash dishes. I came here to fight.”

The standoff at Wounded Knee ignited an outbreak of violence lasting several years. Included among the victims were two US Federal Bureau of Investigation (FBI) agents killed by AIM member Leonard Peltier, whose subsequent, controversial conviction and imprisonment were the subject of a number of high profile books and a Hollywood film.

Aquash left Pine Ridge before the occupation ended, but she continued working with AIM in projects across the United States. She became a strong but contentious figure inside the organization, in part due to a romantic relationship she had with Dennis Banks, but also because Aquash was outspoken, and not afraid to challenge AIM’s leaders, particularly about corruption in the organization. Years later, AIM’s critics — including Aquash’s adult daughter Denise Maloney-Pictou — likened the group to a mafia more interested in drugs and guns than Indigenous rights.

“In their world,” Maloney-Pictou has said, “she was a troublemaker. These guys were gangsters, and they had a big problem with her because she knew too much information.”

Amid AIM’s internal rivalries and jealousies, and the pressure of ongoing police investigations, some suspected Aquash of being an FBI informant. In 1975 — according to prosecution evidence later presented in US courts — three AIM enforcers were ordered to kidnap Aquash from a house in Denver and bring her to Wounded Knee. She was raped and interrogated, and one December morning at sunrise, she was taken to a lookout on the Pine Ridge Reservation, walked to the edge of the cliff and shot in the head.

Two months later, a rancher found Aquash’s decomposed body. An initial, hasty autopsy ruled the cause of death as exposure, and her remains were buried unidentified. Before the burial, however, police had taken the precaution of sending the hands from Aquash’s corpse to a crime lab, where they were later identified using Aquash’s fingerprints. A second, subsequent autopsy found a single bullet wound at the base of her skull.

In the years that followed, the murder case went cold. AIM members refused to co-operate with prosecutors and blamed the government — saying the FBI had killed Aquash and had covered up the crime. “There was so much silence, and so much fear, people just didn’t want to talk,” Maloney-Pictou said. “Indians were not willing to go and talk to the authorities, because the authorities were always portrayed as the bad guys.”

In the late 1990s, a number of old AIM members began explaining what they knew, including Arlo Looking Cloud, a former enforcer for the organization who confessed to participating in Aquash’s abduction and murder. Looking Cloud also incriminated an Indigenous man from Canada named John Graham, whom he accused of having pulled the trigger. After years of court proceedings, Graham was extradited from British Columbia and convicted of felony murder in 2011 by a South Dakota court. Looking Cloud was initially sentenced to life imprisonment, but his sentence was reduced to 20 years.

Denise Maloney-Pictou, as well as US prosecutors, have said that Looking Cloud and Graham were simply carrying out orders handed down from others higher up in the AIM organization. As of 2018, no one else has been convicted of the murder. Several senior AIM figures from the 1970s have died — including Theda Clarke, a senior AIM organizer also suspected of participating in the murder, but never charged — while others have denied any role in the crime.

Denise Maloney-Pictou has said what matters most is that the truth surrounding her mother finally emerged — that she wasn’t murdered by the government, “She was killed by her own people” — and that for years, AIM members kept that uncomfortable truth hidden. Maloney-Pictou calls her mother a symbol of the violence and mistreatment Indigenous women still suffer inside their own communities, and of the code of secrecy that prevents such victims from finding justice.

“(My mother) is a testament to what we deal with today in our communities, with the level of violence and domestic abuse, and with the premise that, above all costs, you have to protect the brotherhood,” she has said. “This goes against our traditional upbringings.”

In March 2018, Maloney-Pictou took that message — and her mother’s story — to a hearing of the National Inquiry into Missing and Murdered Indigenous Women and Girls in Montreal, where she pleaded with Indigenous people to seek the truth and not be blinded by tribal or family allegiances.

Maloney-Pictou has also condemned efforts by the Assembly of First Nations (AFN) to campaign (along with other Indigenous-rights groups) for Leonard Peltier’s release from prison. In 2016, she spoke out against AFN National Chief Perry Bellegarde, after he called on Prime Minister Justin Trudeau to use a meeting with US President Barack Obama to push for Peltier’s release. Maloney-Pictou believes Peltier protected her mother’s killers and should remain behind bars. Bellegarde later said he regretted the pain his comments had caused Aquash’s family, but said the AFN would continue to support Peltier.

In 2004, Aquash’s remains were exhumed by her family and brought to Nova Scotia, where they were interred at Sipekne’katik First Nation.