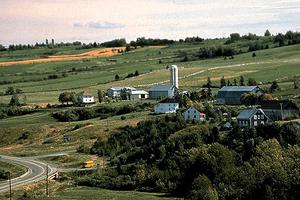 The topography of the Lowlands is the result of weathering and erosion by rivers of the nearby flat-lying early sedimentary rock (photo by Thomas Kitchin).

St. Lawrence Lowland is a plain along the St. Lawrence River between Québec City in the east and Brockville, Ontario, in the west, including the Ottawa River valley west to Renfrew, Ontario. The lowland’s total area is 46,000 km2 (5,000 km2 of which is in the United States). It is

The details of the lowland's present landscape are the result of the last continental glaciation, followed by marine submergence, emergence and, finally, river erosion and deposition. Evidence of early glaciation has been obliterated by later ones, but deposits exposed in valleys near Lac Saint-Pierre indicate that an early interval of weathering and deposition of river gravels was followed by at least two episodes of glaciation. These were separated by a non-glacial interval during which peat and lake sediments accumulated. This interval lasted from about 70,000 to possibly 34,000 years ago.

The last major glacial advance covered the region prior to 18,000 years ago. This ice sheet eventually retreated with minor re-advances, intermittently uncovering the south and southwest parts of the lowlands, which were then inundated by pro-glacial lakes. Residual glacier ice obstructing the St. Lawrence Valley near Québec disintegrated 13,000 years ago and the sea flooded the region, forming a body of water known as the Champlain Sea.

From 13,000 to 10,000 years ago the St. Lawrence Lowland rose rapidly (as much as 20 m per century) in response to the disappearance of the ice mass. The highest relict strand lines of the Champlain Sea are now 230 m above sea level on the north side of the lowlands and 75 m lower on the south side.

The sea withdrew 9,500 years ago and for a short time a lake with a surface at 40 m (present elevation) occupied the central part of the basin. It drained when the St. Lawrence River eroded its channel past Québec deeper, and the present course of the river became established around 6,500 years ago.

Altitudes range from 15 m above sea level along the St. Lawrence River northeast of Montréal to 150 m along the borders with the Laurentian Mountains to the north, the Adirondacks to the south and the gradual transitions to the Appalachians in the southeast and the Precambrian Shield of Ontario in the west.

Tributaries of the St. Lawrence that drain the lowland from the south are the Châteauguay, Richelieu, Yamaska, Saint-François, Nicolet, Bécancour and Chaudière rivers, and from the north, l'Assomption, Maskinongé, Saint-Maurice, Batiscan and Sainte-Anne rivers. Tributaries of the Ottawa River crossing the lowland are the South Nation, Rideau, Mississippi, Madawaska and Bonnechere rivers.

The large-scale topographic features are the result of subaerial weathering and erosion by rivers, during the last 100 million years, of the nearly flat-lying early Paleozoic sedimentary rocks of the lowland. The rocks from oldest (lowest) to youngest (uppermost) are sandstone, dolomite, limestone and shale, ranging from 520 to 480 million years old. These sediments are in a basin surrounded by older, more resistant crystalline rocks. Below the sedimentary rocks is an ancient surface of moderate relief that was eroded on the older Precambrian rocks.

The lowland is dominated by the Monteregian Hills, a series of isolated mountains in a belt about 20 km wide extending east from Montréal to the Appalachians. They are, from west to east, Mont-Royal (231 m), Saint-Bruno (213 m), Saint-Hilaire (404 m), Saint-Grégoire (229 m), Rougemont (366 m), Yamaska (411 m), Shefford (518 m) and Brome (548 m). All are erosional remnants of igneous intrusions of the early Cretaceous age (144–97.5 million years ago). Whether any volcanoes existed above the intrusions is unknown because no direct evidence remains.

Igneous dikes and sills radiate from the Monteregian Hills, and some support terraces around the mountains, and form parts of the Lachine Rapids in the St. Lawrence River. Hills of Precambrian crystalline rocks project through the sedimentary rocks of the lowland 30–50 km west of Montréal at the Oka Hills (260 m), Rigaud Mountain (213 m) and a hill near Saint-André-Est (137 m). An estimated 800–1,200 m of rock has been eroded from the lowland in the last 100 million years. The north boundary is an eroded fault line escarpment in many places.

The lowland is part of a rift valley originating in Cretaceous times, and is a region of high earthquake probability where major damage can be expected; during historical times about 10 major earthquakes have occurred in each century.

Much of the St. Lawrence Lowland is underlain by clay deposited in the Champlain Sea. It is as thick as 60 m along the north side near the former glacier margin and becomes progressively thinner until it virtually disappears. When subjected to excessive water percolation from rain or snowmelt, the clay becomes unstable and often subsides in earth-flow landslides, which have caused much loss of life and property.

The west and south parts of the lowland are underlain by glacial deposits (till) rather than marine clay. Wave action has removed the silt and clay from the till, leaving behind sand and gravel, so that beach deposits are common on the hills in this region. Around the margins of the lowland are numerous sand and gravel beaches, spits and bars representing former water levels. Fossils are abundant in Champlain Sea deposits, including foraminifera, molluscs and vertebrates such as seals and whales, and indicate that these waters were similar to those of the present Labrador coast and Gulf of St. Lawrence.

In the lower, central part of the lowland, areas of sand north and east of Montréal are remnants of former deltas of the Ottawa and St. Lawrence rivers. Low terraces covered by river sands occur in the east part of the lowland. Some of the sand has been formed into dunes; locally these have elongated, sharp crests as high as 18 m and are called "crêtes de coq." The aeolian sand is stabilized by vegetation. Along the Ottawa and St. Lawrence rivers from Ottawa to Lac Saint-Pierre are trough-like abandoned river channels as wide as 2 km, with banks as high as 10 m.

On the plain east of Montréal, roughly parallel to the St. Lawrence, are ridges of bouldery sand 1.5–4.5 m high and 30 m wide, which appear to be material transported and pushed up by floating river ice during the river's early stages. The ridges have provided excellent building sites and road locations, and many rural communities are built on them.

Much of the lowland is good agricultural land. Its clay has been used for brick and tile manufacture, and the sand and gravel deposits are exploited for road metal and construction material. The rocks of the lowland have been quarried for building stone, silica, cement, lime, crushed stone and concrete aggregate and for making brick and tile.

The lowland was occupied by ​Iroquoian-speaking people at the time Jacques Cartier arrived in 1535. The farmlands were settled in the pattern of narrow strips fronting on the river, characteristic of the seigneurial system. Industry began near Trois-Rivières where bog iron was exploited in 1737. The St. Lawrence Lowland now cradles the largest part of the population of Québec.