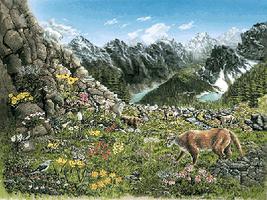 In this fragile alpine environment, vegetation changes as the altitude increases. At a certain level trees no longer survive, although a wide variety of flowers is seen. The animals that live in the ecosystem are the cougar and elk (right), bighorn sheep and bear (centre), mountain goat (upper left) and numerous birds (artwork by Claire Tremblay).

A mountain is a landform with steep sides and a narrow summit area that rises prominently above adjacent land. A mountain is higher than a hill and smaller in area than a plateau, but the distinction is relative, depending more on relief (vertical distance from summits to valleys) than on size or elevation (vertical distance above mean sea level). Volcanic mountains or VOLCANOES are built by the accumulation of lava and solid ejecta from a volcanic vent. Erosional mountains are remnants of once larger uplands that have been dissected by streams or glaciers (see GLACIATION). Tectonic mountains have been elevated by crustal disturbances such as folding, faulting or plutonic activity (see PLATE TECTONICS).

Most mountains are the product of several processes and their form depends on age, rock type and climate, which influence the type, extent and rate of EROSION. Mount Everest (elevation 8847.7 m), in the Himalayas, is the highest point on the Earth. The highest mountain in Canada is Mount LOGAN (elevation 5959 m) in the ST ELIAS MOUNTAINS) of the Yukon. The mountains having the greatest relief on the Earth are the volcanoes of oceanic islands, which rise from the deep ocean floor, eg, Mauna Kea, the highest mountain in Hawaii, which extends 9752 m from the ocean floor.