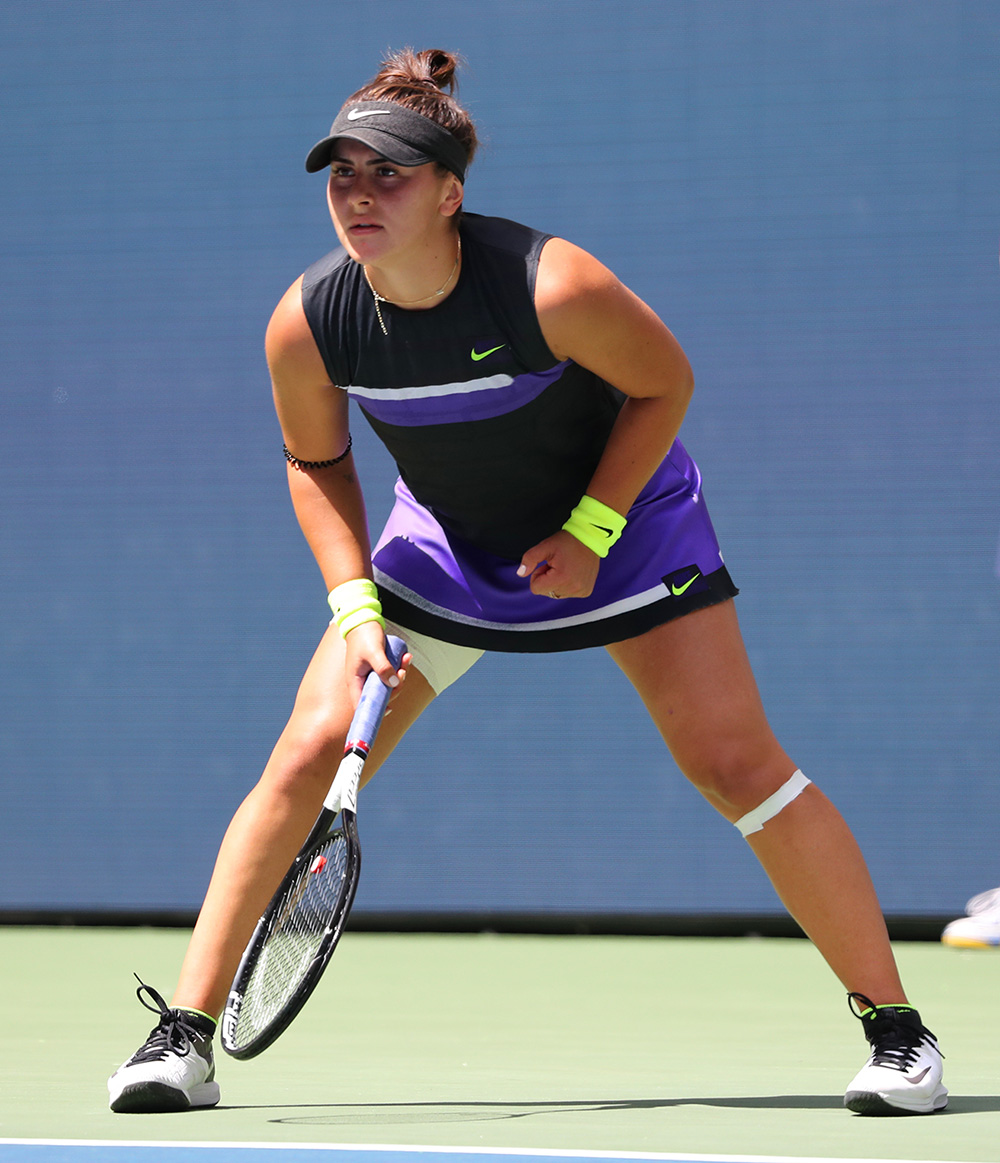 Bianca Andreescu is the only child of Nicu and Maria Andreescu. Bianca’s parents immigrated to Toronto from Romania in 1994. (See also: Romanian Canadians.) Maria has a master’s degree in financial management from the University of Craiova. Nicu has a bachelor’s degree in mechanical engineering from the Transilvania University of Brasov.

From 2006 to 2009, Bianca and Maria lived in Romania, as Maria had temporarily relocated there for work. During this time, Bianca started to participate in tennis. At age seven, she was taught by Gabriel Hristache. Bianca also took part in soccer, swimming, gymnastics and skating while growing up.

Bianca and her mother returned to Canada in 2009. She began training at the Ontario Racquet Club in Mississauga. At age 10, she moved to the Tennis Canada Regional Training Centre in Toronto and then the National Training Centre in Montreal. During this period, Bianca was able to watch older Canadian tennis players Vasek Pospisil, Rebecca Marino, Eugenie Bouchard and Denis Shapovalov train and develop their skills.

Andreescu won her first international junior singles tennis tournament in 2012 at the Wahlstedt Junior Future event in Germany, a tournament for players 12 and younger. Andreescu beat Francesca Jones of Great Britain in the final 1–6, 6–3, 6–4. Her remarkable singles success carried over into 2013. She won four 14-and-under events and two 18-and-under events.

In 2014, at the age of 13, Andreescu won Les Petits As, an elite 14-and-under tennis tournament in Tarbes, France.  She followed her win in France with singles tournament victories that year at the Copa Horizontes Amistad in Havana, Cuba; the Ontario Junior Indoor Closed Provincial Championships in Mississauga; and the International Tennis Federation (ITF) Grade 4 Tournament in Lexington, South Carolina.

In December 2014, Andreescu continued a streak of Canadian dominance at the Under-16 Junior Orange Bowl Girls’ Tournament in Plantation, Florida. She became the fourth Canadian in four years to win the event, following Erin Routliffe of Caledon, Ontario (2011), Gloria Liang of Mississauga (2012) and Charlotte Robillard-Millette of Montreal (2013).

In 2015, Andreescu won the Condor De Plata in La Paz, Bolivia; the Canadian Open Junior Championships in Repentigny, Quebec; and the Under-18 Junior Orange Bowl in Plantation, Florida. That same year, she was named the Tennis Canada Junior Female Player of the Year.

Andreescu reached the final of an International Tennis Federation (ITF) women’s singles event in Gatineau, Quebec in 2015. This was her first career professional tournament. She also won 12 junior doubles tournaments from 2012 to 2015.

Also in 2016, Andreescu won her first non-junior ITF event in Gatineau, Quebec. She beat Elizabeth Halbauer of the United States 6–2, 7–5 in the final. She also reached the final of an ITF event in Saguenay, Quebec, where she lost to American Catherine Bellis 6–4, 6–2. At the end of 2016, Andreescu was named Tennis Canada’s Most Improved Player as well as Junior Female Player of the Year. 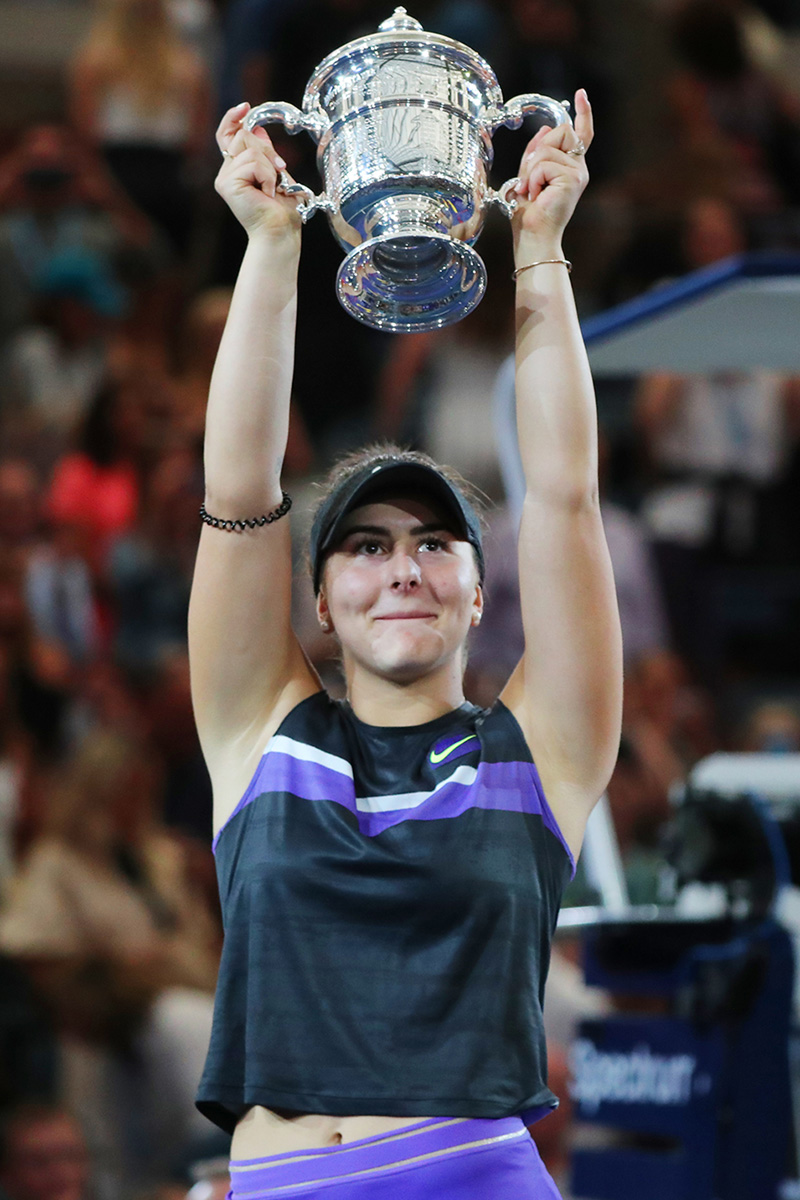 Andreescu began 2017 by reaching the semifinals of the junior girls’ event at the Australian Open. She also won the junior girls’ doubles tournament there with Carson Branstine. She followed this up with victories at two ITF tournaments in Rancho Santa Fe, California, and Santa Margherita di Pula, Italy.

In 2018, injuries plagued Andreescu and she missed two months as a result of a back injury.

In 2019, Andreescu broke out with the best season ever by a Canadian singles player. She began the year by reaching the women’s final at the Auckland Savings Bank (ASB) Classic in New Zealand. She beat superstars Caroline Wozniacki of Denmark and Venus Williams of the United States before losing to Julia Goerges of Germany 2–6, 7–5, 6–1 in the final.

Andreescu then reached the second round of the Australian Open. She won an ITF event in Newport Beach, California, and reached the semifinals in Acapulco, Mexico. At Indian Wells, Andreescu stunned the tennis world by becoming the first Canadian to win a Women’s Tennis Association (WTA) Premier Mandatory tournament. She beat Angelique Kerber of Germany 6–4, 3–6, 6–4 in the final. A nagging shoulder injury forced Andreescu to pull out during Miami and the French Open. She missed Wimbledon entirely.

Andreescu made her return at the 2019 Rogers Cup in Toronto. Expectations were not high as it was Andreescu’s first tournament in over two months. However, she won a difficult first round matchup against fellow Canadian Eugenie Bouchard by a score of 4–6, 6–1, 6–4. She then put together five more wins to become the first Canadian in 50 years to win the Rogers Cup.


Three of the wins for Andreescu came against Top-10 players. She beat Kiki Bertens of the Netherlands 6–1, 6–7, 6–4 in the third round. She then defeated Karolina Pliskova of the Czech Republic 6–0, 2–6, 6–4 in the quarter-finals. Facing Serena Williams in the finals, Andreescu went up 3–1 in the first set before Williams withdrew from the match due to back spasms.

Andreescu was seeded 15th heading into the 2019 US Open. After wins over Katie Volynets of the United States and Kirsten Flipkens of Belgium, Andreescu beat Wozniacki in the third round. Tough three-set wins over Taylor Townsend of the United States in the fourth round and Elise Mertens of Belgium in the quarter-finals followed. Andreescu then beat Belinda Bencic of Switzerland 7–6, 7–5 in the semifinals to become only the third Canadian ever to reach a grand slam tennis singles final. On 7 September 2019, Andreescu made tennis history by becoming the first Canadian grand slam singles champion ever when she beat Serena Williams in the final 6–3, 7–5. By winning the US Open, Andreescu won $3.85 million and moved to fifth place in the WTA rankings. By October she was ranked No. 4, making her the highest-ranked Canadian in WTA history. She was forced to bow out in November due to a knee injury but finished the season with a record of 48–7.

On 9 December 2019, Andreescu became the first tennis player to win the Lou Marsh Trophy as Canada’s athlete of the year. A panel of 24 sports journalists from across Canada voted unanimously to bestow her with the honour. She also received the 2019 Bobbie Rosenfeld Award as Canada's female athlete of the year.