The Eastern massasauga is a thick-bodied snake that can reach a maximum length of up to 1 m, but most individuals are much smaller than this. Like all rattlesnakes, Eastern massasaugas have a distinctly triangular-shaped head, vertical pupils, a blunt tail with a rattle at the end, and hollow, hinged fangs that are used to inject venom into their prey. Rattlesnakes are pit vipers, which means they have heat-sensing organs known as “pits” between the nostrils and eyes. Eastern massasaugas are grey, tan or brown in colour, with a row of dark-brown, saddle-shaped blotches down the back, rows of smaller blotches along the sides, and alternating light and dark bands at the end of the tail. The belly is black to dark brown, often with light mottling.

In Canada, the Eastern massasauga is only found in southern Ontario. Here, its distribution is restricted to the eastern shore of Georgian Bay, the northern Bruce Peninsula, Wainfleet Bog on the Niagara Peninsula, and one small area in the town of LaSalle near the city of Windsor. Historically, the species was likely found throughout much of southwestern Ontario, including the areas south of Georgian Bay and along the north shore of Lake Erie. In the United States, the Eastern massasauga’s distribution extends from western New York and Pennsylvania west to Iowa and Missouri. 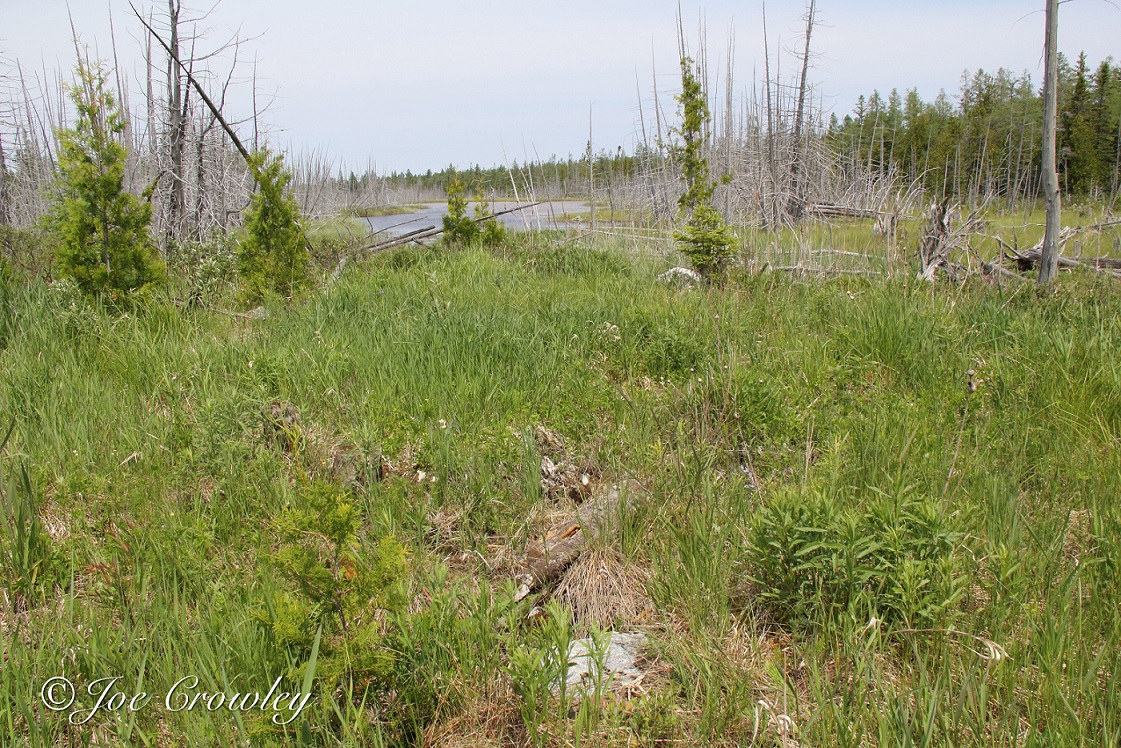 Eastern massasaugas are often associated with wetlands. However, they also use a variety of other habitats, including rocky outcrops, forest clearings, shorelines, grasslands and fields. They require warm, open-canopy areas that receive sunlight for basking. They rely on structural features such as large rocks, log piles or low-lying vegetation to provide shelter from predators and to avoid extreme temperatures. In the winter, Eastern massasaugas hibernate underground in rock crevices, mammal or crayfish burrows, root hollows or other habitats where they can get below the frost line. Individuals typically return to the same area each year for hibernation. Eastern massasaugas often migrate over 1 km between their summer habitat and hibernation site.

In Canada, females generally only reproduce once every two years. Mating primarily occurs from mid-July to late August. Females give birth to live young the following year from late July to early September. On average, there are about nine newborn snakes per litter, though litter size can range from 2 to 21 young. The newborn snakes average a little over 20 cm in length. Eastern massasaugas in Canada typically reach sexual maturity at three to six years of age. There is little information on the maximum lifespan of this species, although individuals have been known to live up to 14–17 years in the wild. 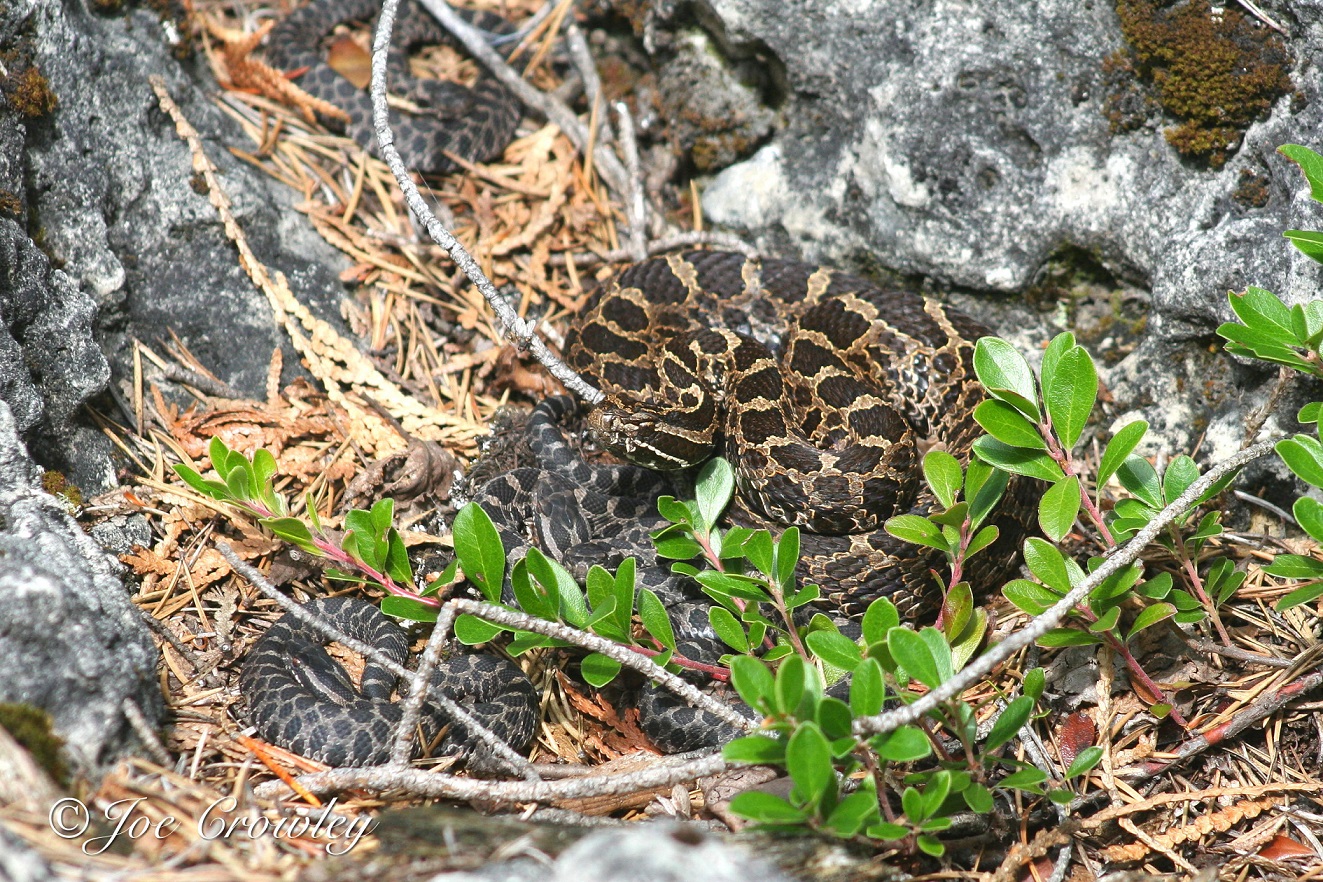 Urban and agricultural development has resulted in widespread loss and fragmentation of the Eastern massasauga’s habitat in Canada, particularly throughout the southern portion of its distribution. Ongoing habitat loss and fragmentation continues to threaten this species throughout its range. Snakes are frequently injured and killed on roads. This can result in population declines in areas with high road densities and traffic volumes. Southern Ontario has a dense road network, making roads a serious threat throughout most of the Eastern massasauga’s Canadian range, including in protected areas. Despite their legal protection as species at risk, many people still kill rattlesnakes out of fear. However, increased educational efforts are helping to address this threat. Climate change is causing more frequent and severe weather events, such as droughts, floods and fires, which can threaten local populations. For example, floods and droughts can alter the water table and lead to the death of hibernating snakes due to drowning or dehydration. Other threats to the species include forestry operations, illegal collection for the pet trade, and diseases such as snake fungal disease.

The Eastern massasauga has declined throughout North America and has become rare in several of the US states in which it is found. In Canada, the Eastern massasauga is listed as threatened and endangered in the Great Lakes / St. Lawrence and Carolinian regions, respectively, under the federal Species at Risk Act. The Act provides legal protection for species and their habitat. Although the Eastern massasauga is at-risk in Canada, populations in eastern Georgian Bay and on northern Bruce Peninsula are among the most secure populations remaining in North America. Because of this, Canada has an important role in the global conservation of this species.

When Eastern massasaugas feel threatened, they will often rattle to ward off predators or flee. They very rarely bite in defence unless provoked. When in Eastern massasauga habitat, the risk of rattlesnake bites can be greatly reduced by paying attention to one’s surroundings, wearing long pants and closed-toed footwear, giving snakes space when they are encountered, and never attempting to pick up or otherwise harass snakes. Human deaths from Eastern massasauga bites in Canada are very rare — the last reported incident was in 1962 — and have only occurred when people did not receive appropriate medical attention.