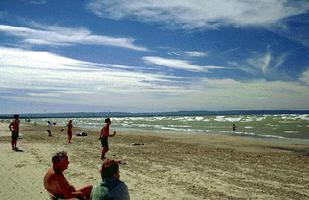 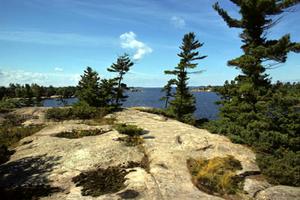 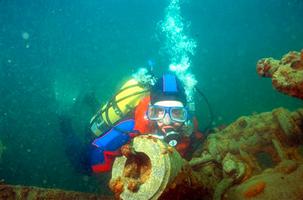 Georgian Bay, northeast arm of Lake Huron in southcentral Ontario. It is shielded from the lake by the limestone spine of the Niagara Escarpment, which extends in a great arc northwest up the Bruce Peninsula. The bay is fed from Lake Superior via the North Channel, between Manitoulin Island and the north shore, and independently by the Mississagi, Spanish, French, Magnetawan, Muskoka, Severn and Nottawasaga rivers. The strait between the Bruce Peninsula and Manitoulin Island is called Main Channel (25 km wide).

In contrast to the soft, white limestone cliffs of the west shore, the east shore is cut into the hard edge of the Canadian Shield, fractured into myriad bays, inlets and sounds, with thousands of islands strewn along the coasts. On the inner, southwest curve of Nottawasaga Bay are numerous sandy beaches, the longest of which is Wasaga. Located around the bay (from southwest to northeast) are Owen Sound, Collingwood, Wasaga Beach, Midland, Port McNicoll, Victoria Harbour and Parry Sound; in summer local residents are greatly outnumbered by tourists.

Brûlé was the first European to see the bay (perhaps as early as 1610) and Champlain came via the French River (1615) to visit the Huron, who lived on a small peninsula along the southeast shore (see Huronia). Jesuit missionaries came to the area in the 1620s and Brébeuf was entrusted with founding a permanent mission in the area in 1634 (Sainte-Marie Among the Hurons).

The bay also has a natural water connection, sometimes called the Toronto Passage, to Lake Ontario via Lake Simcoe and the Nottawasaga River. It was used by the Indians and later during the War of 1812, when a military base was opened at Penetanguishene. Settlement followed the building of a railway from Barrie to Collingwood in 1855. Free land grants opened the area in 1868, but the soil is generally unfavourable to farming. The key industry of the late 19th century was logging; in 1890 Midland was second in production only to Ottawa. By 1900 most of the original forests had disappeared; the lumber industry died, leaving behind slashed-over terrain and a few local mills. The fishing industry lasted longer. Immense quantities of whitefish, trout and pickerel were shipped out by rail until the 1950s. By 1960 the industry was virtually ruined by the Lamprey.

Today there is a variety of secondary industry around the bay - textiles, cameras, shipbuilding. But the once-profitable grain-handling business diminished rapidly after the St. Lawrence Seaway opened. Tourism, based on the natural splendour of the Georgian Bay area, began in the 1850s with the arrival of the railway and is now the main industry. Summer homes were built along the N shore in the 1880s, and thousands came after 1900 by train to Parry Sound and Midland, thence by boat to the islands to fish, sail and pitch tents - a pattern of vacationing repeated every year. The best-known areas are the North shore islands, the "Thirty Thousand Islands" on the east shore, Manitoulin Island, the amusement-park atmosphere of Wasaga Beach, the yacht harbour at Tobermory and the Martyrs' Shrine and reconstructions of Sainte-Marie and a Huron village near Midland.

Called Lake Manitoulin by Captain William Fitzwilliam Owen, who charted the area 1815, the bay was later decreed part of Lake Huron and named for King George IV by Captain H.W. Bayfield's Admiralty Survey 1819-22. Nearly as large as Lake Ontario, it is one of the world's great bodies of fresh water.