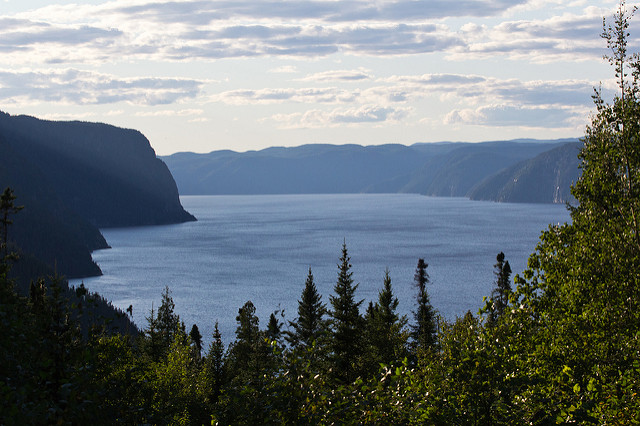 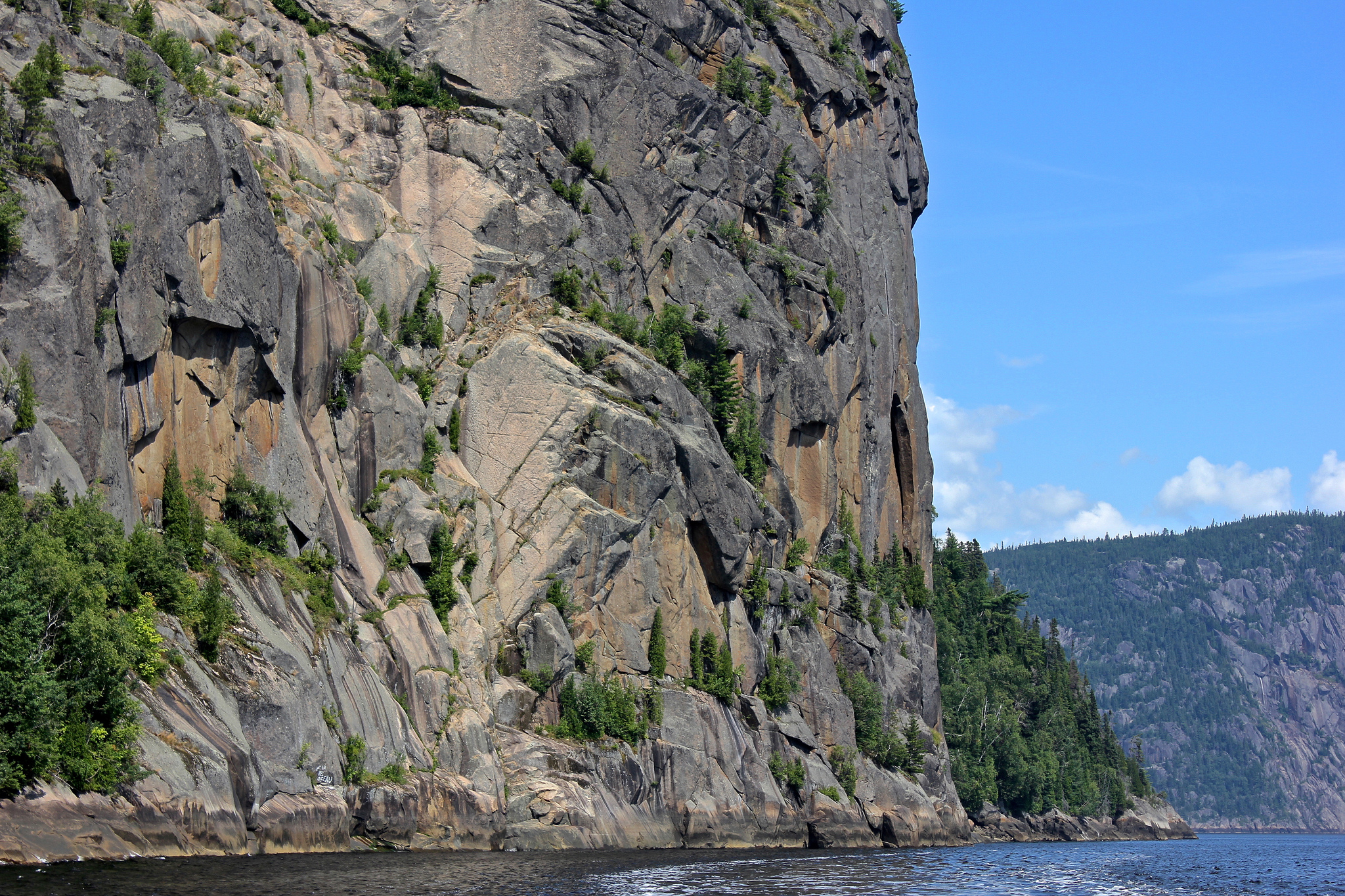 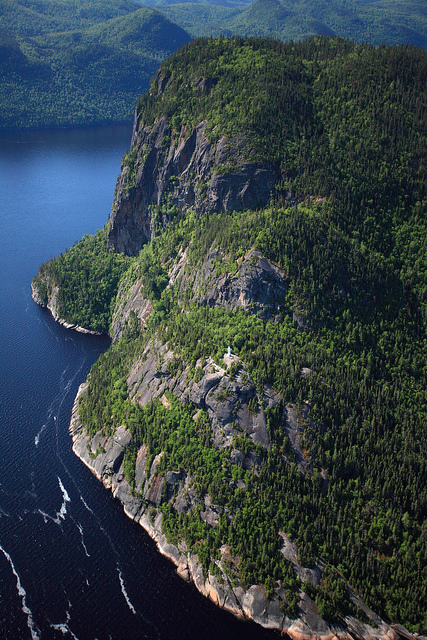 The Saguenay Fjord was carved out near the very edge of the North American continental ice sheet. This fjord has the very rare characteristic of being intracontinental. Most other fjords, such as those on Baffin Island and in British Columbia, Scandinavia, and Chile, empty directly into the ocean. But the Saguenay Fjord lies in the interior of North America, providing a water passage into the Laurentian Highlands from which Hudson Bay can be reached by an inland route with which Aboriginal people were familiar long before Europeans arrived. Tadoussac, at the mouth of the fjord, became the first trading post in Canada in 1599, because Aboriginal tribes were already accustomed to meeting at this location to trade with one another.

In the Saguenay-Lac-Saint-Jean region, there are three geomorphological units lying at different levels at the edge of the Laurentian Highlands. The highest, Lac Saint-Jean, occupies a basin whose bottom lies at an elevation of 98 m. Le môle de Kénogami est un verrou fracturé about 60 km long where the waters make a difficult passage from the lake to Chicoutimi, dropping 90 m in the process. Lastly, the fjord empties into the St. Lawrence River. This set of features is delimited by a system of faults and escarpments that are clearly visible in the landscape. The fjord is located almost at the centre of a collapsed trough 50 km wide on the edge of the Canadian Shield, which suggests that it is of tectonic origin (see Plate Tectonics), because it is located in a zone of rocks that are fractured and hence less resistant to erosion. The current path of the fjord is in fact attributable to glacial erosion.

During the last glaciation, the continental glacier flowed from the northwest into this region, leaving the glacial striations that are visible to this day. After levelling out the plateau to the north and excavating the basin of Lac Saint-Jean, the glacier flowed into the collapsed trough described above, heading southeast. The erosive force of the ice in this fault-bordered depression was augmented by the 90 m drop between the lake level and the point where the fjord begins, slightly downstream from Chicoutimi. For the next 90 km, to Tadoussac, the ice carved out a series of longitudinal depressions and wore away the hillsides, thus giving this valley the characteristic shape of a fjord.

For almost its entire length, the sides of the fjord are steep cliffs 300 m high, reaching their highest point, 460 m, at Cap Trinité. When the submerged portion of the fjord is included, the figures are even more impressive: the depth of the fjord then totals 450 m upstream, 700 m at Cap Trinité, and 580 m downstream, before its bed begins to climb sharply in the vicinity of Tadoussac. As is typical of glacial valleys, the walls have been worn smooth by the passage of an ice tongue. Likewise, the hanging valleys on either side of the fjord are also evidence that this is indeed a valley carved by a glacier and subsequently invaded by the sea. As is also characteristic of fjords, the Saguenay narrows toward its mouth: it is 3.5 km wide near Chicoutimi, but only 1.3 km by the time it reaches Tadoussac. The most distinctive characteristic is the depth of the bed of the fjord, which averages 240 m, but rises to only 22 m near Tadoussac, where it forms what is called the sill at the mouth of the fjord.

This is the opposite of the normal profile for rivers and streams. The explanation is as follows: as the ice tongue moved down the valley, it carried rock debris along with it. But as the ice tongue reached the end of the valley and made contact with the sea water at its mouth, the ice grew thinner. It rose and began to float, thus losing any ability to move debris further along. That is why there is always a rock sill at the mouth of every fjord, including the Saguenay. This sill even plays a role in the marine biology of the fjord, because it traps cold water upstream that is favoured by deep-water marine wildlife. The entrance of the St. Lawrence Estuary was already ice-free 13,000 years ago. It was through the corridor formed by the Saguenay Fjord that the waters of the Atlantic invaded the Lac Saint-Jean Lowlands and created the Laflamme Sea, a tributary of the Champlain Sea that had the same effects in this area, depositing layers of clay soil that would prove suitable for agriculture.

Upstream of Chicoutimi, the fjord becomes a river that is the only outlet for the waters of Lac Saint-Jean and its immense 79,000 km2 drainage basin. The Saguenay River has an average discharge of 1200 m3/s, with peak flows of 1600 m3/s in flood season. But it never carried more water than during the millennial flood of 11 July 1996, when a stagnant, moist air mass came in contact with a cold stream of air drifting in from the north and caused 180 mm of rain to fall over the region in just 36 hours.

In the 20th century, the river’s large flow volume and especially the numerous breaks in its slope at the môle de Kénogami quickly attracted industries that needed large amounts of electricity, such as pulp and paper mills and aluminum plants. The largest aluminum plants in the world are now located in the region, at Alma, Jonquière and Laterrière. In the race to develop hydroelectricity, the Saguenay River was harnessed soon after the Saint-Maurice. In 1925, the Isle-Maligne Dam was built, and the level of Lac Saint-Jean was raised 5.3 m to convert it into a reservoir that would be used to stabilize the river’s flow. The metallurgical industry then became the economic engine for the region. To generate the hydroelectric power needed to produce aluminum for Allied aircraft, the great Shipshaw Dam was built rapidly right in the middle of World War II, providing 896 MWof power in a single stroke. The hydroelectric plants on the Saguenay increased their installed capacity to 2,300 MW in the region, the centre of which is the urban agglomeration of Jonquière and Chicoutimi, with a population of 166,000.

The Saguenay Fjord is a natural resource that must be preserved. Many marine species frequent its waters, including the beluga, fin, minke, and blue whales that come to feed at its mouth. A marine park and a shoreline conservation park have been established to protect this sensitive environment. For over a century, cruise ships have been visiting the Saguenay constantly, so that tourists from all over the world can come admire the most accessible fjord in North America.