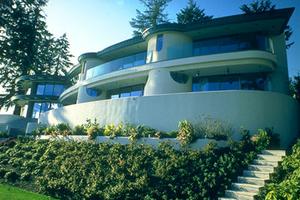 Fred Thornton Hollingsworth, architect (b at Golbourne, Lancaster, Eng 8 Jan 1917). Hollingsworth emigrated with his family in 1929 to Vancouver where he attended the Vancouver School of Art and initially pursued a career in commercial design. The quality of the plans for his own house in North Vancouver (1946, extension 1957) was recognized by Charles E. Pratt of the distinguished local Modernist firm Sharp and Thompson, Berwick, Pratt. He articled with S&TBP (1946-51) designing a large number of inexpensive houses for the growing suburbs of Vancouver and North and West Vancouver. These combined the European rationalist and West Coast American streams of post-war Modern architecture.

Hollingsworth was most affected by the organic principles of Frank Lloyd Wright, who offered him employment in 1951, and the formal and spatial innovation of Bernard Maybeck. Hollingsworth's early houses had modular post-and-beam structure atop concrete slab on grade containing a radiant heating system. They followed a generic type adjusted for individual client and were denominated by him "Neoteric." Over 50 were built in the Capilano subdivision in North Vancouver alone, the later variants exhibiting experimentation with standard pre-cut lumber and plywood.

During his apprenticeship with S&TBP Hollingsworth evolved an increasingly creative personal idiom governed by ongoing preoccupation with the inter-relationship of building and site, use of natural materials, integration of form with structure and play of plane on plane, partly to attain an informal but client-tailored plan and appropriate spatial ambience. The desire for aesthetic independence led him to join William Birmingham as Design Associate (1951-58). Together they privileged more craft elements, influenced not only by Wright but also by an appreciation for Asian and Northwest Coast indigenous design. These traditions formed a part of the discussions of "The Intellects," a group Hollingsworth formed with his friend Ron Thom and including Bud Wood, Beans Justice, Arthur ERICKSON and Barry DOWNS, with whom he would form a partnership in 1963.

The idiosyncratic Modernism Hollingsworth evolved is exemplified in the "Red Feather" Community Chest and Council Building, Vancouver (1956, with Birmingham, advisor Fred Lasserre; demolished), Imperial Inn, Victoria (1961-62) and Maltby House, West Vancouver (1962-63), awarded the Massey Gold Medal in 1964. The association with Downs (1963-67) was highly productive and only ended because Hollingsworth wished to concentrate on domestic architecture.

Increasingly he attracted more adventuresome clients such as Richard Trethewey (houses at Abbotsford and Haney BC, respectively 1960 and 1987), Steven Stewart (Provo, Utah, 1974) and Kenneth Malmgren (Burnaby, 1987-88). No less significantly he has retained others including Jack Moon (Vancouver, 1950, and Calgary, 1978), Tom McGrath (Bellevue, Washington 1966, additions 1969, and Seattle, 1984) and Peter and Marlena Fluckiger (White Rock, BC, 1984 and 1997-98). He has also completed innovative institutional architecture, notably the Berkeley Private Hospital, White Rock (1961) and the Law School Extension at the University of British Columbia (1962-63).

Hollingsworth's reputation rests upon his distinctive domestic architecture, at its most architectonically and aesthetically sophisticated in the West Vancouver mansion for the developer Nat Bosa (1991-93). He has won the highest professional honours, being elected President of the Architectural Institite of BC (1971-72) and of the Royal Architectural Institute of Canada, (1975-76), as well as Honorary Fellow of the American Insititute of Architects in 1976.