This article was originally published in Maclean’s magazine on October 30, 1995. Partner content is not updated. 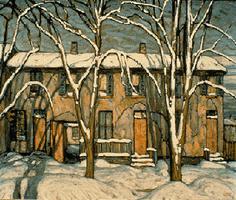 Painting by Lawren Harris, one of the paintings in a major show of the group's art which ran in Ottawa until 31 December 1995 and later in Toronto and Vancouver (courtesy Maclean's).

The cost of the first catalogue was a dime, while the most expensive paintings - two Lawren Harris works, one depicting a waterfall and the other a ramshackle row of color-splashed shacks in a dreary Toronto slum - were listed at the lofty price of $1,000 each. "The group of seven artists whose pictures are here exhibited have for several years held a like vision concerning Art in Canada," read the pamphlet's foreword. Stretched across the walls of the Art Gallery of Toronto, the 121 works of the renegade cabal of artists known as the Group of Seven defied presiding art wisdom and, by some accounts, good taste. Certainly the brilliant tumble of reds, yellows and blues raked across their raw northern landscapes outraged a good number of critics. But on this occasion, a 20-day art show in the spring of 1920, few people of note bothered to show up. In fact, the group sold only three paintings, two oil sketches and one pastel, and not enough catalogues to meet printing expenses. "It seems probable," wrote J. E. H. MacDonald, the group's founder, "that we shall have to pay, as usual, for the privilege of giving the Toronto public an art education."

Perhaps the lesson could have ended there, in yet another flourish of avant-garde art. Instead, 75 years after that inaugural exhibition, the paintings of the Group of Seven are icons, not only of domestic art but, arguably, the country's very identity. Now, the National Gallery of Canada in Ottawa is marking the 75th anniversary of that milestone show in a major exhibition called The Group of Seven: Art for a Nation. Running in Ottawa until Dec. 31, and then travelling to the Art Gallery of Ontario in Toronto (Feb. 11 to May 5), the Vancouver Art Gallery (June 19 to Sept. 2) and the Montreal Museum of Fine Art (Oct. 3 to Dec. 1), the show painstakingly charts the group's evolution from 1920 until it disbanded in the early 1930s. According to Charles Hill, curator of Canadian art at the National Gallery and organizer of Art for a Nation, the seven painters never set out to sketch a national identity. "If the image of the Group of Seven has been used as a cliché of nationalism, it was not of their own making," he says. "Rather, the debate they inspired was at the core of Canadian modern art."

That debate had everything to do with shaping a meaningful contemporary esthetic. In front of their easels, the seven - MacDonald, A. Y. Jackson, Lawren Harris, Arthur Lismer, Frank Carmichael, Fred Varley and Franz Johnston - were for the most part prodigiously true to their belief that a young and untamed country warranted a bold and distinctive style. As Jackson wryly noted in 1922: "The modern painters either stimulate, amuse or cause anger, which perhaps in such a young country is better than to go to sleep too soon." Central to the group's mission was the need to explore and embrace Canada's wild and rugged beauty. "The country was exciting: the atmosphere clear and sharp, the colors bright and crude if you will," Jackson reported after one northern Ontario sketching trip. In the face of such blazing beauty, he added, "Why stick to the barnyard, why paint cows and sheep and rural tranquility?"

The group's decision in 1920 to assemble their works for showing provided a united front dedicated to wrestling Canadian art, and art collectors, from the prettily stylized sylvan confines of traditional European art. While vulnerable individually to criticism, together as a group they virtually created their own art establishment. The artists had their ardent supporters - one enthused that their work was as distinctively Canadian as the United Church of Canada. But more vociferous, at least early on, were the detractors. One critic dismissed their canvases as "garish ... loud, affected, freakish." Their severest critics were appalled by what they considered the glorification of irredeemable ugliness. "Ugly things in art are like ugly things in life," sniffed Hector Charlesworth, a sometimes fan and alternately savage foe. "One does not wish to live with a picture of a slum any more than he wishes to live in a slum."

The National Gallery show explores the group's defiant mandate through 180 paintings, watercolors, drawings and prints. Also included are works by group contemporaries, including Emily Carr, Bertram Brooker and Prudence Heward. Visitors to the National Gallery can also wander over to the institution's permanent collection of 60 oil sketches and 10 canvases by the group's forebear and inspiration, Tom Thomson, who died in 1917. (Thomson's work is currently being showcased at the McMichael Canadian Art Collection in Kleinburg, Ont., near Toronto, in a show featuring more than 800 creations by him and the Group of Seven. That exhibition, which opened in the summer, has proved so popular - 47,000 visitors, at last count - that it has been extended three months, to next March.)

Sadly, most Canadians are able to name more members of the Seven Dwarfs than of the Group of Seven. Yet many pieces on view at the National Gallery have been engraved on the national psyche - the images of jagged pines etched against a cascade of clouds, wind-whipped lakes and barren rocks, remote, stately mountain peaks - and, in Harris's Shacks, desolate tenement houses with yellow windows and blue doors that, according to one effusive writer of the group's era, "zip out of the naked plaster like poppies stuck in skulls."

By changing Canadian art, the Group of Seven forever altered the way Canadians look at their country. They were, of course, not the first artists to depict Canada, but they remain among the best. It is little wonder that the works of a remarkable and diverse group of painters are embedded in the national consciousness, as real as the earth and sky that inspired them.