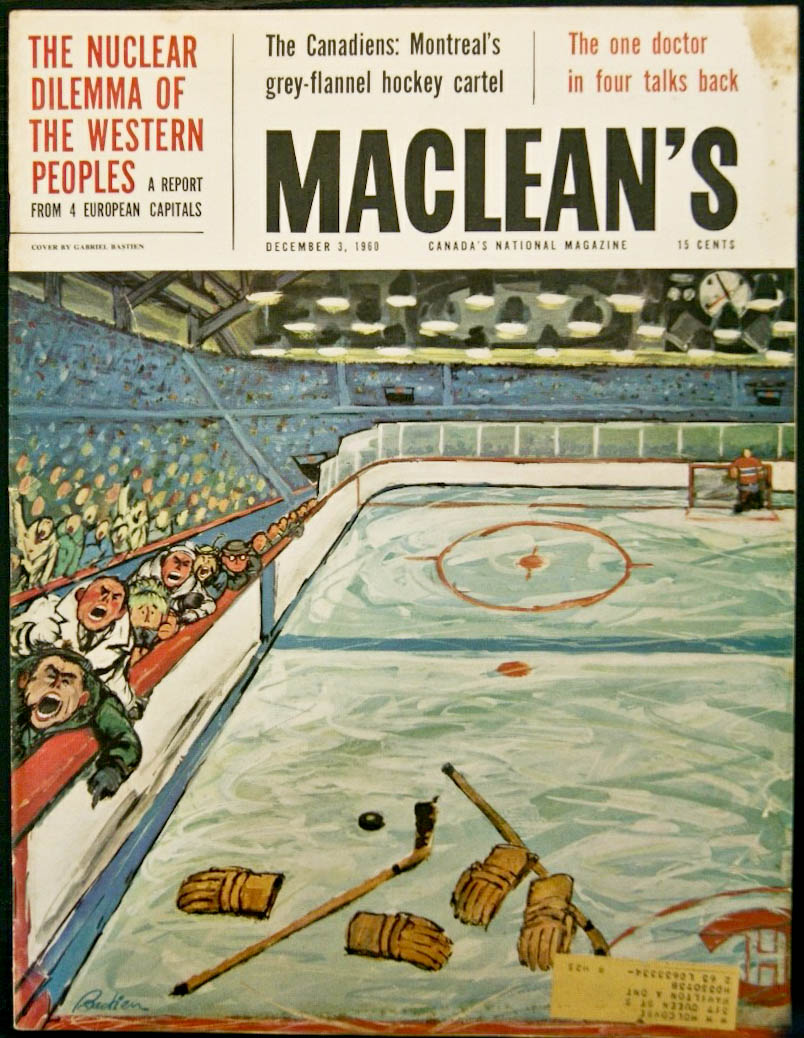 Maclean's was acquired by John Bayne MACLEAN in 1905 and was the first consumer magazine to be published by him. Between 1896 and 1910 the magazine had a number of titles, including Business, The Business Magazine, The Busy Man's Magazine and Busy Man's. It was officially named Maclean's in 1911.

Initially, the new magazine was a general interest digest for businessmen, ordinarily devoting most of its space to reprints of articles from the world's periodicals. By 1914, however, Maclean and his editor, T.B. COSTAIN, saw that Canadian NATIONALISM might be a profitable line, and by the boom years of the 1920s Maclean's had its formula. There were always articles on Canadian men and women, Canadian politics and problems, Canadian fiction, and regular features at the "back of the book." Occasionally, as when George DREW denounced arms manufacturers, there was a crusading air, but ordinarily the magazine was firmly middlebrow.

The high point was the early 1950s. Blair FRASER was the Ottawa correspondent, and his regular column presented the best grade of political gossip, while his longer pieces were the decade's best political reporting. In Toronto editor Ralph ALLEN tried for a liberal mix of thoughtful and light pieces, good illustration and occasional fiction. The magazine was successful in circulation and revenue.

In the 1960s Maclean's experienced difficulties. ADVERTISING revenues fell as television cut into the periodical market, and even able writers such as Peter GZOWSKI, Peter C. NEWMAN and Christina McCall could not arrest the decline. What saved Maclean's was the temporary conversion to a monthly newsmagazine format. Under Newman as editor, the magazine took advantage of the opening that resulted from Time leaving Canada and in 1975, Maclean's resumed publishing every two weeks as Canada's first indigenous newsmagazine, with bureaus in Ottawa, Vancouver, Calgary, Montreal, Halifax, Washington and London. In 1978, Federal legislation limited advertising tax write-offs to ads in magazines that were primarily Canadian in content and staffing, enabling Maclean's to issue its first newsweekly, which would attempt, as Newman wrote in the inaugural weekly issue, "to make sense out of the barrage of news that avalanches into most Canadian living rooms on a daily, almost hourly basis."

Although Maclean's continues to rely on stringers for most of its foreign news, its Canadian coverage is good and provides a welcome supplement to the pallid fare in most newspapers.

Maclean's cover stories have generated a certain amount of controversy over the decades. In 2011, the magazine was reprimanded by the Quebec Press Council for a controversial cover featuring a photo of the iconic Bonhomme Carnaval snowman (SeeWINTER FESTIVALS) clutching a briefcase stuffed with cash and calling Québec the most corrupt province in Canada. After threats of lawsuits by Québec City Carnaval organizers, the magazine published a letter expressing regrets.

In 2008, the Canadian Human Rights Commission dismissed the complaint brought against Macleans by the Canadian Islamic Congress regarding the article, "The Future Belongs to Islam," an excerpt from Mark Steyn's book America Alone, which Maclean's defended as "a worthy piece of commentary on important geopolitical issues, entirely within the bounds of normal journalistic practice."

The annual ranking of universities has also generated significant controversy, with some schools refusing to participate at times, and criticism of the rankings as "over-simplified and arbitrary" and citing lack reliability due to low-response rates.

To stay topical and relevant, Maclean's has initiated a variety of creative ventures, including: the annual ranking of Canadian universities published each March; a stand-alone book, The Maclean's Guide to Canadian Universities; and an online portal offering continuously updated higher education news from campuses across the country. Additionally, Maclean's produces an annual list titled "Canada's Top 100 Employers" and has published a best-selling series of books (Canada at War, Canada on Ice, Canada in the Fifties, In the Face of Disaster and Maclean's People), featuring previous Maclean's articles and published in cooperation with Penguin Books Canada.

In 2007, Maclean's was the first Canadian national newsweekly to launch a fully digital edition, offering free one-year digital subscriptions and featuring immediate access, faster delivery, enhanced features, and a searchable archive. In 2012, the magazine delved deeper into the high-tech world by unveiling a new app for iPad, which included enhancements such as embedded video, photo galleries, digital links, and other navigation tools The app also provides readers with the ability to save their favourite articles and share them with friends and followers on Facebook, Twitter and email.

In 2012, Magazines Canada, the trade association representing Canadian publishers began lobbying federal officials for funding to develop multimedia-rich digital editions in an attempt halt falling circulation and weak adoption rates for online versions. Rogers Publishing Limited, a division of ROGERS COMMUNICATION, which also produces many well-known consumer magazines such as CHATELAINE, Flare, Hello! Canada, L'ACTUALITÉ and CANADIAN BUSINESS, has a distinct advantage over most Canadian magazine publishers due to its size, permitting the same publishing platform for dozens of magazines, and the ability to hire technicians with the expertise to produce enhanced copies.