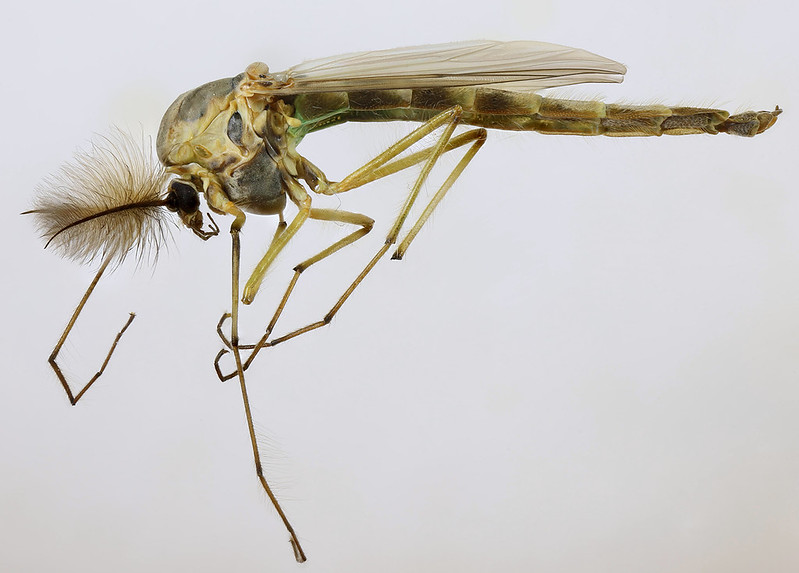 Almost 800 species of Chironomidae live in Canada, making them the country’s most species-rich family of flies. In addition, scientists expect at least 1,000 more species live here. Non-biting midges are found almost everywhere in Canada, reaching the northern limit of land in the Arctic Archipelago. At high northern latitudes, they make up as much as one-half of the insect fauna. Larval stages are mostly aquatic, although some larvae live in decaying matter, soil and other moist habitats. Larval midges are an important food source for fish and other aquatic animals.

Larvae of most non-biting midges burrow in the mud at the bottoms of bodies of water, but some spin silk tubes to use as shelter. The larvae of some non-biting midges are called bloodworms for their characteristic red colour. This colour is due to the presence of haemoglobin in their blood. Haemoglobin allows them to survive in low-oxygen environments at the bottoms of lakes. Bloodworms are commercially grown for use as fish food.

This group includes some of the very few insects that have evolved to live in marine environments. Some species are adapted for life in mats of green algae, while others live along ocean shores in waters up to 30 metres deep.

Adult non-biting midges are slender insects that resemble mosquitoes, but they lack a proboscis. Adult males have distinctive feathery antennae. Non-biting midges form huge mating swarms in the evenings. These swarms can become so large that they resemble clouds of smoke. Because of these swarms, non-biting midges are often considered a minor nuisance to humans, although they are harmless. Adults of most species are very short-lived, surviving just long enough to mate and lay eggs.

The phantom midges (Chaoboridae) are another, common group of non-biting midges, so called for their transparent appearance. They are represented in Canada by eleven species. Phantom midge larvae are aquatic and are predators of mosquito larvae and tiny crustaceans. 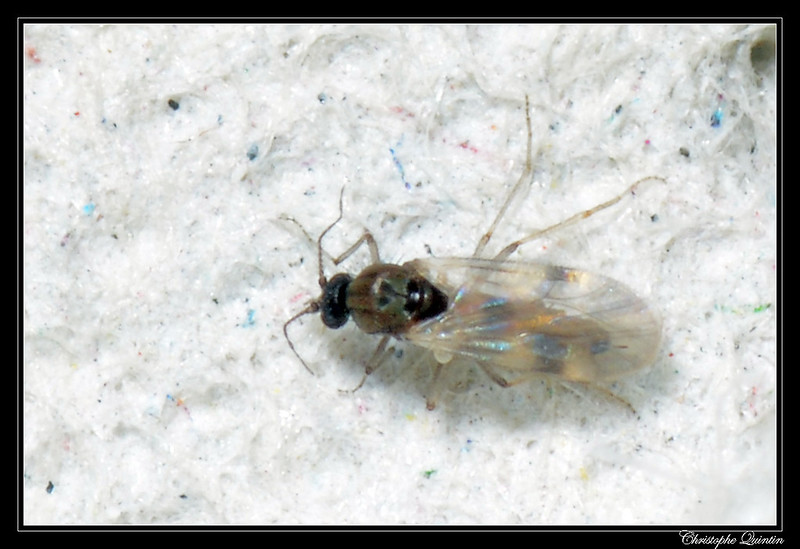 In Canada, there are 263 known species of biting midge. Females bite humans, mammals, and birds in a similar manner to mosquitoes.

Biting midges (Ceratopogonidae) are small, stout flies that can be a serious nuisance in the summer months. Biting midges are often called no-see-ums due to their small size and tendency to bite before they are noticed. In Canada, there are 263 known species. In addition, scientists expect at least twice as many more species live here. Biting midges are most abundant near rivers and lakes, and along seashores. Their larvae live in mud or moist soil, where they are scavengers or predators of other small invertebrates.

Most of the midges that bite humans are in the genera Culicoides and Leptoconops. Females bite humans, mammals, and birds in a similar manner to mosquitoes. Like mosquitoes they use their piercing mouthparts to draw blood from the skin. Biting midges are not effectively repelled by chemicals, but they can be easily avoided by simply leaving the immediate area. Not all biting midges are pests. Many species prey on other insects, such as non-biting midges, using the sound of their prey’s wingbeats to locate swarms of them. Predatory midges in the genus Forcipomyia are essential pollinators of cacao flowers.

Some midges in the genus Culicoides transmit disease. The most significant of these diseases is bluetongue, a viral disease affecting sheep and cattle. Bluetongue is present in Africa, Asia, Australia, South America, and North America, although it is only occasionally reported in Canada. The virus has the potential to become more prevalent here as a consequence of climate warming. 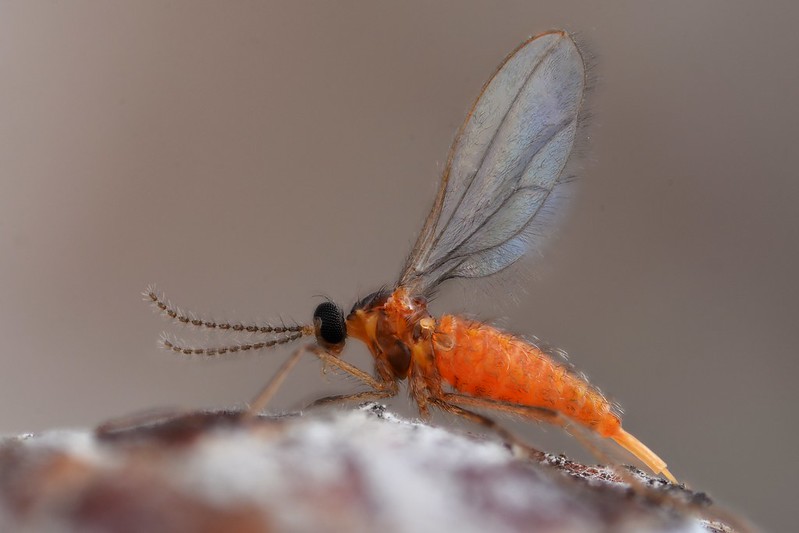 There are 243 known species of Cecidomyiidae in Canada. Pictured here is the Douglas-fir needle midge (Contarinia pseudotsugae).Most gall midges form galls, or abnormal growths, on the leaves, stems, flowers, buds, or roots of plants.

Cecidomyiids are very small, delicate flies, commonly called gall midges. About two-thirds of all species in this group form galls on the leaves, stems, flowers, buds, or roots of plants. Galls are abnormal growths of plant tissue. They are usually induced by the saliva of insect larvae for use as food and shelter. Some examples of galls induced by midges include maple leaf spot and pine-cone willow gall. Most gall midge larvae feed by piercing plant cells and sucking out the fluid within. The larvae of non-gall-inducing species in this family mostly live in decaying plant matter, rotting wood, or fungi. Some species, such as the commercially-available aphid midge (Aphidoletes aphidimyza), are beneficial predators of mites, aphids, and scale insects. In Canada, there are 243 known species of Cecidomyiidae, although scientists believe anywhere between 1,000-16,000 live here. Gall midges are not closely related to the other midges mentioned in this article. 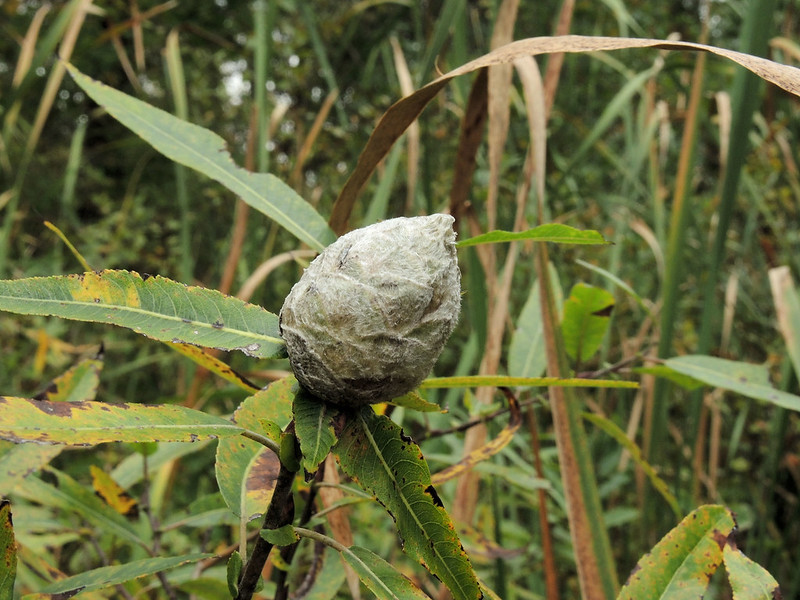 Willow pine cone gall, caused by Rabdophaga strobiloides, is an example of the type of abnormal growth gall midges can create.

Gall-inducing species spend the winter as larvae or pupae in cocoons spun in the soil or inside their galls. Adults emerge in the spring or summer to mate, and females lay their eggs on suitable host plants. Once hatched, the larvae induce new galls to provide them with food to last through the season. Some species undergo several generations per year.

The family includes a number of important plant pests, such as swede midge (Contarinia nasturtii, a pest of canola), balsam gall midge (Paradiplosis tumifex), and chokecherry gall midge (Contarinia virginianae). Hessian fly (Mayetiola destructor) is a serious pest of wheat. Its larvae feed between the leaf and stem, causing the plant shoot to weaken and die. 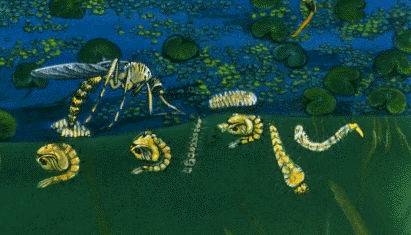 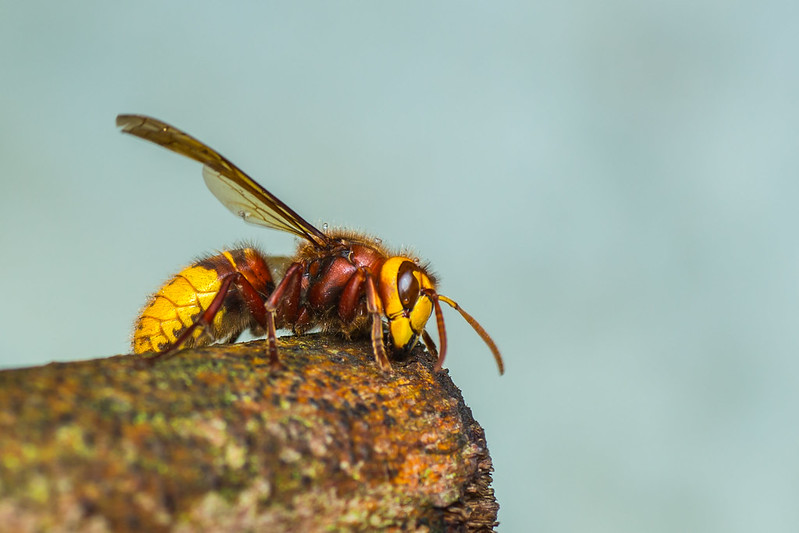