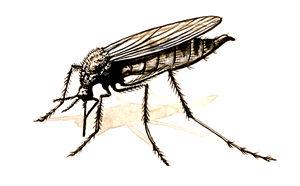 Adult mosquitoes have a long, slender proboscis, a pair of long antennae divided into 15 segments, and densely scaled wing veins. The female proboscis has six long, pointed stylets that, together, pierce the victim's skin to draw blood. Males are easily told apart from females by their very bristly antennae. Larvae live in water and lack legs. They have a distinct head with protruding mouth brushes and antennae, and are widest across the thorax. On the posterior end, larvae have either a pair of respiratory openings or a long siphon for breathing air from the water surface. Pupae are also aquatic and breathe from a pair of small conical tubes located near the head.

Mosquitoes are found around the world in temperate, tropical and Arctic habitats, especially in relatively cool locations with high humidity. They are most diverse in tropical forests. In Canada, they are found in every province and territory, and are extremely abundant in northern regions during the short Arctic summer. Various species may be active at any time of day, as species who prefer the day, night and twilight all exist. Adults usually remain within a few kilometres of water and are active in the late evening, at night or in shade. When not active, they may rest in sheltered places like hollowed-out trees or culverts. Larvae and pupae can be found in virtually any standing body of water, be they ponds, pools or artificial containers.

Eggs are laid on water (Culex, Anopheles) or on moist soil (Aedes). Those laid on soil often hatch after flooding, or in response to specific environmental conditions, and may remain dormant until the following spring. Eggs deposited in aquatic habitats subject to drying (e.g., shallow pools or water-filled containers) can withstand drying out for weeks or months.

All mosquito larvae are aquatic and, except for a few predaceous species, feed on organic debris and microorganisms. Pupae are relatively active, but do not feed. They are called “tumblers” because of their lobster-like downward-and-backward swimming motion (larvae are called “wrigglers”). Adults emerge directly from water and both sexes seek plant fluids (nectar, honeydew, etc.) for energy, although females usually must feed on blood before they can produce eggs. Females are drawn to their hosts at a distance by a combination of exhaled carbon dioxide and visual stimuli, and are attracted at closer ranges by radiated heat and skin scent. One blood meal may measure up to three times the female’s own bodyweight. During mating, the highly bristly antennae of the males allow them to detect specific female wingbeat frequencies, helping them to locate and distinguish females of their own species.

The number of generations per year is usually variable depending on climate and weather. Generally, the early-season woodland mosquito (Aedes) lays a single brood per year, while species that lay their eggs in larger, more persistent waterbodies (Anopheles, Culex) typically breed throughout the season, as long as the weather is favourable. The adult female lifespan averages three weeks in summer, but Canadian species that hibernate as adults may live for eight to nine months. Other species may overwinter as eggs (and hatch in spring) or as larvae; in parts of Canada, these larvae may be ice-bound for six to seven months.

Mosquito larvae are filter feeders and a source of food for fish, while adults are eaten by birds, bats, frogs, spiders and other insects. Most larvae use their two large mouth brushes and a series of bristles to filter out algae, plankton and organic debris, although some are predatory and feed on other larval mosquitoes. Most larvae breathe by drawing air from the water’s surface, but a few species siphon oxygen from the roots of aquatic plants.

Adult females of most species are not especially picky as to which hosts they attack; hosts are usually warm-blooded vertebrates, but can also be snakes, turtles, toads, frogs and other insects. As disease carriers, mosquitoes are best known for their impacts on humans, but are also carriers of bird malaria and encephalitis (inflammation of the brain) — both of which are significant problems for wild bird populations — as well as encephalitis in horses. A number of species also transmit dog heartworm.

Mosquitoes can be a major pest and a nuisance to humans, as their bites cause irritation and result in loss of blood, though typically not enough to be of medical concern. An anticoagulant in their saliva is responsible for the familiar itchy welt. Mosquitoes also transmit a host of human diseases, including malaria (Anopheles), yellow and dengue fevers (Aedes), filariasis (Culex), encephalitis (Culex, Aedes), West Nile virus (Culex), Zika virus (Aedes) and a number of others. Worldwide, over 210 million people suffer annually from malaria alone, although both incidence and mortality rates of the disease have gradually declined since 2000. Most mosquito-transmitted diseases are especially common in the tropics and are not established in Canada, although various mosquito species that could serve as carriers are abundant here. Control measures against mosquitoes include eliminating larval habitats by draining them, treating larval habitats and human environs with insecticides (subject to provincial guidelines and/or regulations in Canada), using physical barriers such as specialized clothing, screens and bed nets, and using insect repellents.

Not all mosquitoes bite. Some species consume enough protein as larvae to produce eggs as adults. In particular, populations of Wyeomyia smithii, found throughout eastern Canada, do not bite, nor do species of Toxorhynchites, found in southern Ontario.

A collective term for the long, needle-like or beak-like mouthparts of mosquitoes and other fluid-feeding insects.

A pointed, needle-like shaft forming part of the proboscis piercing mouthparts of mosquitoes and other fluid-feeding insects.

The section of an insect’s body between the head and abdomen. In all adult insects, the thorax bears the legs and wings.

The immature life stage of insects which undergo complete metamorphosis, different in appearance from the adult stage. This is the first stage following the egg.

The intermediate life stage, between larva and adult, of insects which undergo complete metamorphosis. Pupae are normally dormant and do not feed.