"Well, by the time we left, we drank too much wine. And we bought some eggs and we bought some more wine to take, and we decided to buy a goose." See below for Mr. Gunther's entire testimony. Please be advised that Memory Project primary sources may deal with personal testimony that reflect the speaker’s recollections and interpretations of events. Individual testimony does not necessarily reflect the views of the Memory Project and Historica Canada. 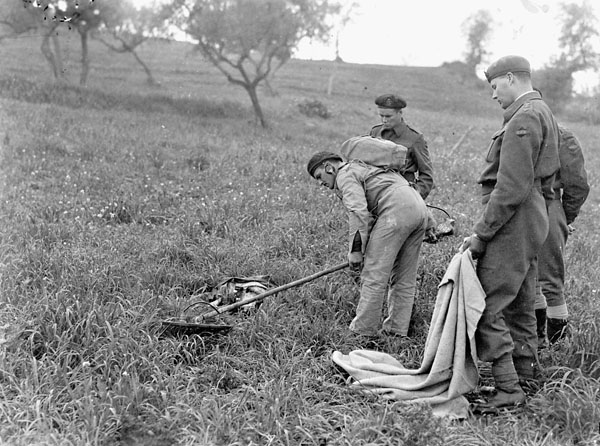 When we were in Italy, up on the static front, one of my buddies at that time and I, we decided to go and look for some eggs, because there were farmers there and these farmers seemed to have a lot of chickens. So we thought, well, it would be good to have fresh eggs because we had to have dried egg, reconstituted eggs, and then they were not like real eggs. They were okay, but we missed the real thing. So we wanted to get some real eggs and fry up some real fresh eggs.

So we went up to this, climbed the mountain, went up to this, well actually, we were higher up, I guess, we went down the mountain a ways, but it was terraced. And we went to this farm and found a farm with chickens and we went in there. And they were very hospitable Italian people and yes, they had eggs, they could sell us eggs. It was a barter system, we traded cigarettes for eggs. And they invited us then to stay for supper and supper was above the barn, there was poultry down below and we had a long table and we sat up there and had supper with them, very nice plain supper, but very good. And they had wine and we had wine for supper.

They couldn’t speak English. By this time, we could speak a little bit of Italian, carried on a conversation. They had geese that would come right up the stairs and they were walking around the tables and some would hop right on the table, I guess. They were right at home there. So we sometimes say the word ‘okay’ to each other, you know how that’s an expression we use, say okay. And the word for goose is similar to that, it’s like okay in Italian. So they thought we were talking about these geese and that was kind of funny. It got to be a humourous situation. And we said, oh no, and we explained what it was we were talking about.

Well, by the time we left, we drank too much wine. And we bought some eggs and we bought some more wine to take, and we decided to buy a goose. We said, can we buy a goose and we’re going to have roast goose as well as fresh eggs. So when we left, why my friend, he took all the eggs and put them in his tunic and buttoned it up and belted it around, tight around the bottom. And I took the goose and tucked the goose’s head under his wing, he was alive, under his wing and carried it under my arm, and away we go.

Well, we drank a lot of wine and my friend, he, with all the eggs, he slipped on one of the stairs going up this terrace and he tumbled down to the bottom and so I turned around and I thought, boy, maybe he got hurt; and I went down, are you okay, I said. He says, well, if you mean am I hurt, no, am I injured, no, he said, but he said, I’m not okay and the eggs were coming out of his tunic, in his pant legs and cuffs and all over the place. He broke all these eggs.

But anyway, we carried on home, I mean home, I mean to the camp, and still had the goose. But we were in no mood to do anything with the goose that night, we were tired and he had to get cleaned up because he was all saturated with eggs. So we put the goose in a, made a little crate and put him in the truck I was driving in the back. The next day, we looked around for some feed and got a bag of corn that we could feed it. And we thought, well, we’ll have this goose a little later sometime. Another day.

So we decided to turn it loose on the canals in Belgium, because there were geese, the farmers had geese there too. And it made itself right at home with the other geese. But every night, we were in this place for about two weeks, and every night, the goose came back. He knew where the corn was, knew where it got fed, it would come back and there was no problem with it. We’d put it back in its cage and feed it corn, and turn it loose then every morning.

Well, then one morning we got a call to move up to the front. And we didn’t have much time to, we went looking for the goose, we couldn’t find it, so we told a little Belgian boy, he says, he had been interested in that goose and we said, the goose is yours now, when it comes back, we gave him the corn and said, here’s the corn, feed the goose and you can have him. So that’s the last we heard of the goose.