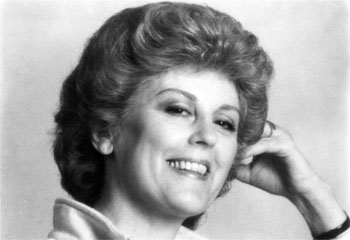 Nonnie Griffin's virtuosity with accents and her ability to play different ages and styles have been a huge asset (photo by Rebecca West, courtesy Nonnie Griffin).

At 16, billed as Margaret Griffin, she performed at the Red Barn Theatre in Jackson’s Point, Ontario. Two years later, she began working with Canadian Repertory Theatre in Ottawa. She appeared with Peterborough Summer Theatre at age 19 and with Toronto’s Jupiter Theatre in the successful 1953 production of Ring Around the Moon at the Royal Alexandra Theatre. Later that year, she appeared as the young Scottish girl Kate MacDonald in CBC TV’s critically acclaimed adaptation of Lister Sinclair’s play The Blood Is Strong. Several TV shows followed, including “Kathleen” (1956), an episode of General Motors Theatre, in which Griffin played the comedic title role.

Griffin had built up an impressive résumé, with roles in CBC Radio’s Stage series (1953–56) and in many plays that required Scottish and Irish accents, among other dialects. Her virtuosity with accents and her ability to play different ages and styles were tremendous assets. Her work was distinguished by sensitivity and intelligence. In the 1950s, the Crest Theatre presented Griffin as Muriel in Ah, Wilderness! and in Charley’s Aunt. She also played Diana in the much-loved musical production of Anne of Green Gables in 1956 and 1958.

In 1957, Griffin appeared in the TV series Last of the Mohicans and onstage in The Boyfriend before leaving Canada to work in England. She auditioned successfully at Bristol Old Vic in London for John Hale, who cast her as Luciana in The Comedy of Errors. That production was also featured at the Baalbeck International Festival in Lebanon.

When Griffin returned to Canada in 1961, she was once again featured regularly on CBC Radio. In 1964, she changed her professional name from Margaret Griffin to Nonnie Griffin after she learned of an older American actress who was also named Margaret Griffin. When John Drainie (renowned as the greatest radio actor in the world) was dying in 1966, Griffin took over for him in the popular series Canadian Short Stories.

Griffin was nominated twice for the Andrew Allan Award, first in 1983 for her work as the young Emily in Our Town and then for Blood Root in 1984. She went on to portray Constanze, wife to Mozart (played by Brent Carver), in a five-part series on CBC Radio’s Ideas in 1991.

Griffin appeared in theatres from New Brunswick to British Columbia, as well as with the summer stock circuit in Ontario. She played Billie Dawn in Born Yesterday (Bastion Theatre, 1974), Widow Quin in The Playboy of the Western World (Centaur Theatre, 1976), Mrs. Rafi in The Sea (Phoenix Theatre, 1977), Dolly Levi in Hello, Dolly! (Limelight, 1989), Marilla in Anne of Green Gables: The Musical (Huron Country Playhouse, 1984, and Red Barn Theatre, 1998) and Mrs. Stilson in Wings (independent production, 2000). She was cast by Peter O’Toole in Uncle Vanya (1978) when he formed his own company in Toronto with the aim of presenting plays at the Royal Alexandra Theatre.

In 1968, Griffin adapted Sean O’Casey’s autobiography, I Knock at the Door, and played O’Casey’s mother in the stage version. She also created her own one-woman shows, which included Keats, Yeats and Other Greats (1995), Tea and Poetry (1999), Nonnie In Performance (2003), From Convent to Show Biz (2004) and Showbiz and Other Addictions (2006). The latter is also the title of her candid memoir, published in 2002.

She starred in Sister Annunciata's Secret (2010), a one-woman play she wrote, at Toronto’s Annex Theatre and again at the 2012 Edinburgh Festival Fringe. In 2014, she wrote and starred in the one-woman play Marilyn – After, which imagines a Marilyn Monroe that lived into old age. She also directed Doug Warwick’s musical comedy, The Flying Avro Arrow (2010), for Toronto’s Alumnae Theatre Company (see also Avro Arrow). She was two weeks away from opening another one-woman show — Before Scarlett, about Gone with the Wind author Margaret Mitchell — when she died at the age of 85.

Nonnie Griffin was the great-granddaughter of Sir William Mackenzie, builder of the Canadian Northern Railway.