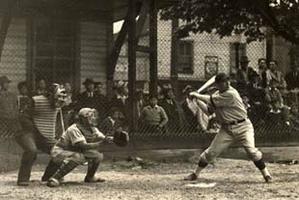 The Asahi were heroes in their Powell Street neighbourhood, and their exciting brand of baseball attracted many fans from outside the Vancouver Japanese community.

The Asahi team was created in 1914 and built their skills playing other amateur teams of firefighters, longshoremen and mill hands. Between 1919 and 1940 they won ten city championships. By the 1920s there were more than fifty teams of young men playing baseball in amateur senior leagues around the province.

The Asahis played what the press called “brain ball”. Smaller in size than most of their opponents, the players relied on speed and tactics rather than slugging homeruns.

Oppenheimer Park was used for baseball and soccer from 1898. Named for David Oppenheimer, the city’s second mayor, it was also the centre of political protests, especially during the Depression when the unemployed would rally here to protest government inaction.

In an era when Japanese were denied the vote and barred from certain professions, the Asahi were a visible source of pride in the community. Then, with the coming of war, Japanese-Canadians were branded enemy aliens. Early in 1942 all people of Japanese background were forced to leave the coast. When baseball season began that spring, there was no Asahi team in the league.