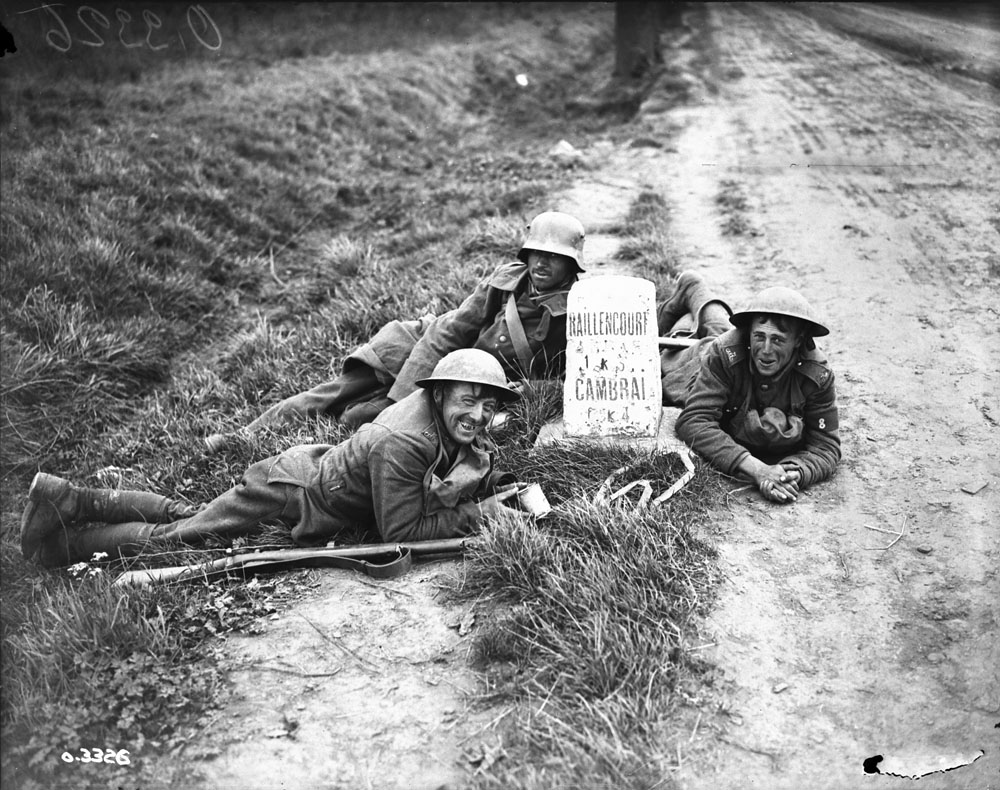 
After years of grinding stalemate in the vast trench works of the Western Front, the armies of France, Britain and their empires had by that summer finally found ways of beating the Germans — using new battlefield tactics and weapons. The Allies were also assisted by the arrival of fresh US troops into the war. Emboldened by their decisive victory at Amiens earlier that year, Allied commanders decided to stay on the offensive in the fall of 1918. They launched multiple attacks against German strongpoints throughout northern France, including an attack on enemy forces holding the city of Cambrai – an important railway and supply hub for the German army.

These attacks became known as the Hundred Days Campaign, the spectacular Allied offensive which put German forces on the run and led to the signing of the armistice on 11 November. 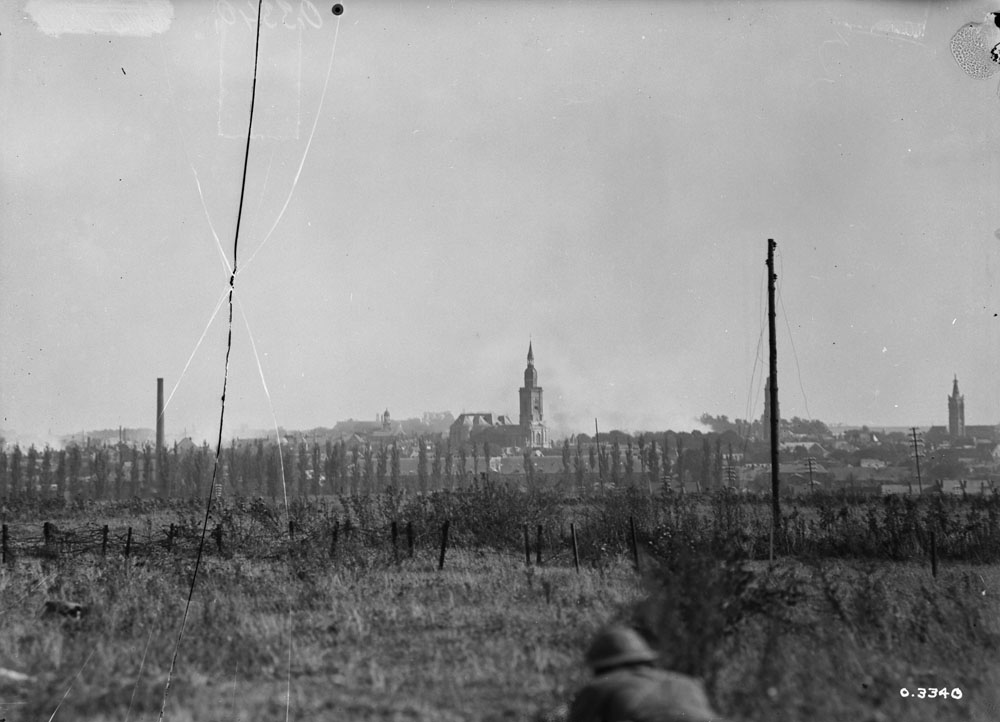 Cambrai was not only heavily defended by German forces, it was surrounded by interlocking man-made canals that were naturally difficult for infantry soldiers and tanks – one of the newest battlefield weapons – to cross. The canals were also guarded by enemy machine-gun posts, barbed wire and other defences.

To get into Cambrai, Allied forces would need to cross the Canal du Nord to the west of the city, as well as seize the heights of Bourlon Wood, a forested hill that overlooked its banks. The difficult task of capturing these two obstacles was given to the Canadian Corps (see Canadian Expeditionary Force), under the leadership of Lieutenant General Arthur Currie. Their job was made even tougher because the Germans had flooded much of the land surrounding the canal and the woods.

Currie spent the latter part of September carefully planning the attack. Canadian and British engineers were given expanded resources and manpower, and ordered to construct bridges to be used in the attack across the canal, and tramway lines for transporting artillery and other supplies to the battlefield. 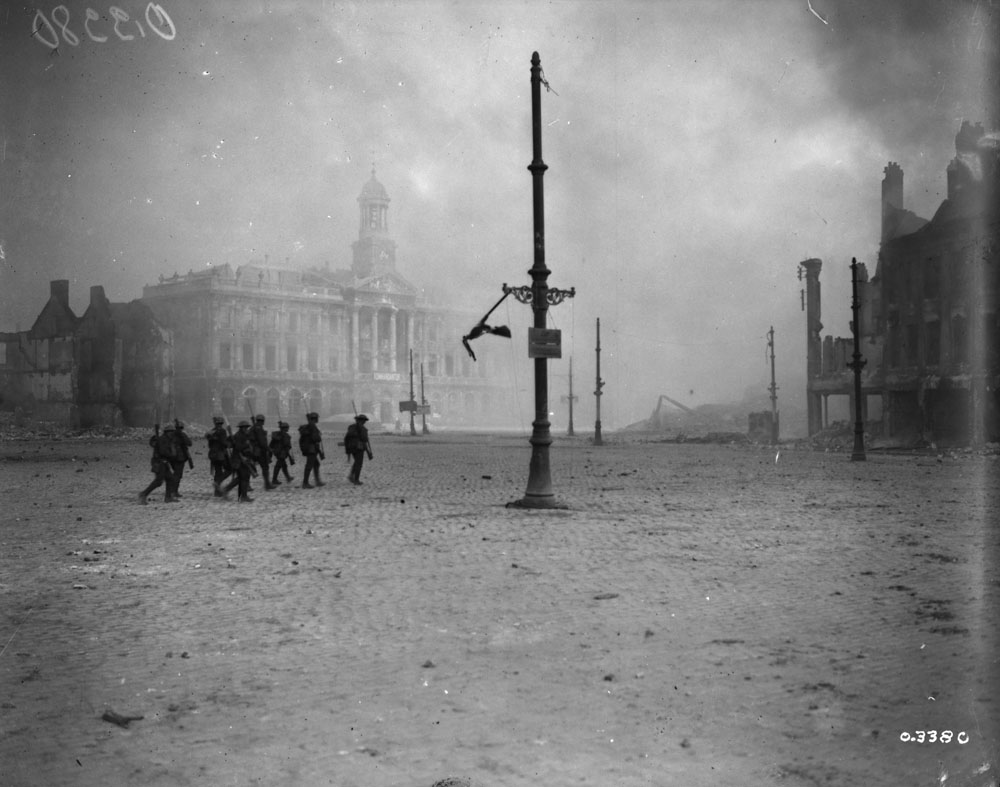 On the morning of 27 September the Canadian Corps, with British forces on its flanks, assaulted a dry portion of the partially excavated canal, following in the wake of a moving, or creeping, artillery barrage that kept German defenders down in their dugouts or concrete machine-gun posts. By nightfall, after a day of stiff fighting, the canal had been crossed and secured, and Bourlon Wood captured.

For the next several days the Canadians fended off heavy German counterattacks. Throughout the battle they were assisted over the difficult and often-flooded terrain by engineers who repaired roads and hastily assembled bridges for infantry and artillery.

With Cambrai's outer defences overrun, the city was captured and liberated by the Allies on 11 October.

Several Victoria Crosses, the British Empire's highest award for military valour, were awarded to members of the Canadian Corps in the battles for Canal du Nord and Cambrai. Among those honoured was Lieutenant G. T. Lyall, a mechanical engineer by training, who found himself and his men confronted by a German strongpoint at Bourlon Wood on the first day of the battle. They outflanked the strongpoint, capturing 13 German soldiers, a field gun and four machine guns. Later, Lyall charged alone into another pocket of resistance, capturing 45 prisoners and five machine guns. Upon reaching his final objective, he took another 47 prisoners while securing his company’s position.

He later captured another 80 prisoners and 17 machine guns after overwhelming a German strongpoint on 1 October.

Another Victoria Cross winner, S. L. Honey, had already earned the Military Medal and the Distinguished Conduct Medal for his actions at the Battle of Vimy Ridge in 1917. During the assault on Bourlon Wood on 27 September, all officers in Honey's unit had become casualties. Honey took command of his company and reorganized its advance while under constant fire. He rushed a machine-gun nest and captured the position alone, taking ten prisoners and the gun. He then held ground against four German counterattacks before leading the capture of another post, which he discovered during a lone reconnaissance mission after dark. He led another attack against a German strongpoint on 29 September and died from wounds the next day.

The capture of Canal du Nord is widely considered by historians to be one of the greatest Canadian tactical achievements of the war, overshadowed by the 1917 victory at Vimy Ridge , but no less impressive. It signaled the effectiveness of highly mobile infantry supported by well-coordinated air, artillery and engineering forces — a recipe for success that the Canadian Corps would employ through the rest of the Hundred Days Campaign.