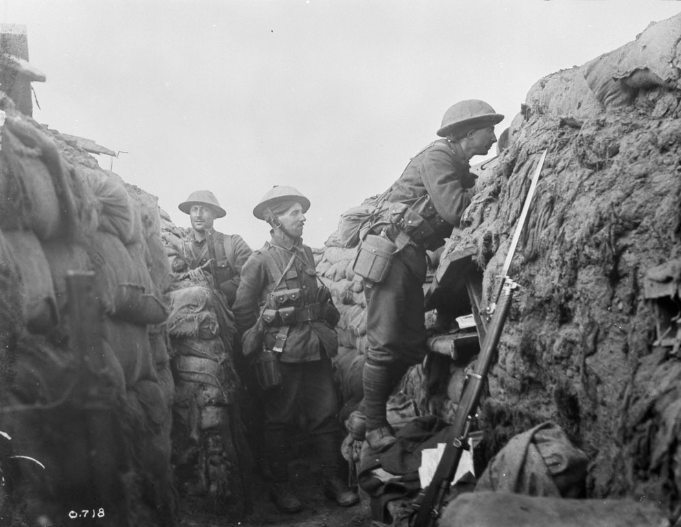 Trenches have a long history in warfare, beginning in the ancient world. Roman legions surrounded their camps with trenches for protection. Modern trench warfare began in the 17th century with a system of consecutive trench lines dug to protect soldiers while they advanced toward a fortress during a siege. In the early 18th century, long lines of defensive trenches were constructed to block enemy lines of advance.

In the American Civil War (1861–65), the increased firepower of small arms and artillery forced both sides to dig trenches. The use of trenches, although sometimes only rudimentary and shallow ditches, continued during the Boer War (1899–1902) and the Russo-Japanese War (1904–05).

Shortly after the First World War began in August 1914, trenches were needed due to the widespread use of machine guns and the increased lethality of artillery. Artillery was the real killer, accounting for 60 percent of all deaths and injuries during the first three years of the war. This was due to larger-calibre ammunition, increased range and accuracy, timed fuses and improvements in high explosive and shrapnel rounds. As the Franco-British armies on one side and the German army on the other repeatedly tried to go around each other’s northern flank, the famous “Race to the Sea” occurred. It only ended when the North Sea was reached. By the end of November, a 700 km trench system snaked across the Western Front, from the Swiss border to Belgium’s North Sea coast.

For most of the next four years, a stalemate existed along the entire Western Front. Both sides settled down to an extended period of relatively static warfare, characterized by an extensive system of trenches. This stalemate was only broken in the closing months of the war through a combination of new infantry tactics, creeping artillery barrages, tanks, air support and other innovations.

Eventually, trenches consisted of three parallel lines at least 1.5 km in depth: fire/forward, support/secondary and reserve. Trenches were not dug in a straight line, but rather in a zigzag or stepped pattern of alternate fire bays and traverses. This was to prevent the blast and shrapnel effects of artillery fire travelling along a straight path. It also stopped any enemy that got into a trench line from firing straight along it. Trenches were built as narrow as possible to limit the blast radius of artillery air bursts.

Trenches were normally dug to a depth of about two metres but were shallower in wet ground. Wood and corrugated tin were used to help prevent trench walls from collapsing. Duckboards, consisting of several wooden slats joined together, were placed along the muddy bottom of trenches to form a path. Sandbags were piled in front of the trench, known as the parapet, to almost a metre high for extra protection. A similar wall of sandbags was built along the back of the trench, called the parados, to protect against friendly fire from soldiers in the rear, as well as to prevent parts of a soldier’s body being silhouetted against the skyline.

Burlap or jute sandbags were half a metre long and pulled shut with cords when filled with earth. They were then stacked in layered rows on top of each other. Loopholes were built into the sandbag walls for observation and snipers. Weather and enemy fire took a continual toll on the walls, and they frequently had to be replaced or rebuilt.

The area in front of the forward trenches was known as no man’s land and was usually 300 to 400 m wide. It contained long strands of thick barbed wire placed in depth. Gaps were left in places to allow patrols or raids to cross no man’s land at night. Such gaps were always covered by machine-gun fire in case of an enemy attack.

Shallow communication trenches zigzagged at right angles from the front-line trenches to the rear and were used to move soldiers and supplies. Deep, protected dugouts were in the front and support lines and also branched off from communications trenches. Initially limited to officers and medical staff, soldiers were later allowed to sleep in them.

Life in the Trenches

A day in the trenches began a half hour before dawn during stand-to, when soldiers manned the trenches in case the enemy attacked in the half light. Once stand-down was called an hour later, the day’s tasks began: cleaning and inspection of rifles and trenches, washing and then breakfast, usually bully beef and hardtack. Sick parade followed, when soldiers who felt too ill to work were checked by unit medical staff. Foot inspections by medical and unit officers preceded the daily rum ration. The two ounces of over-proof liquor were a morale booster, eagerly anticipated and appreciated by all.

Did You Know?
As one soldier noted about bully beef and hardtack, “The first is corned beef and the second is a kind of dog biscuit.” He thought the main ingredient in hardtack was cement, while another soldier compared eating it to “gnawing a very old bone.” Company cooks augmented this monotonous diet whenever they could and tried to ensure front-line troops had bacon and bread at breakfast.


Rum came in gallon jugs and was doled out by sergeants on the direction of officers. It had to be downed in the presence of an officer or NCO to prevent it from being hoarded. Rum compensated in some way for the misery of life in the trenches. If it were withheld, morale could plummet.


Once these preliminaries were completed, NCOs assigned men to sentry duty (one in 12) or work parties. Trenches and sandbags were in constant need of repair, and latrines had to be dug. Soldiers also had free time to clean kit, read, write letters, smoke, play cards, talk or sleep. Lunch and dinner were usually the same monotonous food as breakfast.

Another hour’s stand-to happened at dusk, and more tasks followed during darkness. One in four men acted as sentries, while patrols, wiring parties and two-man listening posts ventured into no man’s land. Ration parties moved back to the reserve lines to pick up mail and the next day’s food and water. Soldiers rotated through the three main trench lines, spending four to six days in each.

Nighttime trench raids were a way for frontline soldiers to strike back at the enemy. Raids had many purposes: to gain combat experience, gather intelligence, capture prisoners, destroy fortifications or simply inflict casualties. While Canadians did not invent trench raids, they certainly developed them to a high state and became the acknowledged masters of raiding.

The unsanitary conditions in front-line trenches meant disease was widespread. Sickness in the trenches gave its name to three specific conditions. Trench foot was caused by standing in water for too long, which resulted in a loss of circulation. If not treated in time, gangrene set in and amputation of toes or even feet followed.

Trench mouth was caused by poor oral hygiene, lack of fresh fruit, heavy smoking and continual stress. It caused bleeding and very bad breath and, if left untreated, required all teeth to be pulled from rotting, discoloured gums.

Trench fever was a common flu-like illness, marked by fever, chills, fatigue and shin pains. Serious cases could sideline soldiers for a week to three months. Officially termed “pyrexia of unknown origin,” its source was only determined in 1918 when lice were revealed as its transmitter.

During their time at the front, but especially behind the lines, many soldiers occupied their leisure hours with the creation of trench art. Ashtrays, mugs, vases, matchbox covers, rings and many other items — both functional and decorative — were made from discarded shell casings, spent bullets and other bits of metal. Soldiers considered trench art as mementoes of their service and brought many examples back to Canada after the war.