Archaeological evidence, such as tools, weapons and household items, indicates that the Beothuk inhabited Newfoundland long before European colonization. It is believed that they may be descended from earlier people, sometimes referred to as the “Little Passage” people. This name is in reference to the first recognized Little Passage site on Newfoundland. The Little Passage people occupied the island for several thousand years. 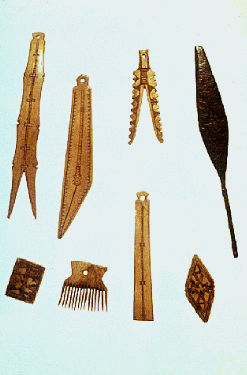 At the time of European contact in the early 1500s, the Beothuk occupied at least the south and northeast coasts of Newfoundland. Shortly after the Europeans’ arrival, the Beothuk moved away from their coastal homelands and ancestral fishing camps to inland territories. Possible violent encounters with the Vikings between 800 and 1000 CE caused the Beothuk to avoid the European newcomers as much as possible. (See also Norse Voyages.)

The Beothuk lived in bark-covered or skin-covered tents in the summer and in semi-subterranean (partially underground) houses during the cold months. (See also Architectural History of Indigenous Peoples in Canada.) They were primarily a coastal people, organized in small bands throughout the various bays of Newfoundland to fish and hunt seals, other sea mammals and birds. They also may have visited interior locations to hunt caribou at river crossings, but the pattern of a winter-long interior occupation does not seem to have occurred until post-contact times. Bows and arrows, harpoons and spears were used in hunting, which often took place from seaworthy bark canoes.

The most distinctive of Beothuk artifacts are carved bone, antler and ivory pendants intricately decorated with carved patterns. Many of these items were recovered from grave sites in caves or rock shelters in the late 19th and early 20th centuries. Another notable feature of Beothuk culture was the people’s lavish use of powdered hematite, or red ochre, with which they painted their canoes, other artifacts and even their bodies. Since they were the first Indigenous peoples in North America encountered by Europeans, it is possible that their custom of using red ochre was responsible for the name “Red Indians,” which was later applied to all First Nations peoples.

As Algonquian peoples, the Beothuk may have shared similar origin stories, religious practices and worldviews. A Beothuk captive named Oubee once testified that her people revered the sun and moon. Shawnadithit, a Beothuk who recorded her people’s history, added that they believed in a spirit world with a supreme spirit (potentially the Creator) and monsters or dark spirits. (See also Religion and Spirituality of Indigenous Peoples in Canada.)

Beothuk woman Demasduit created a dictionary of the Beothuk language in the 1800s. Demasduit was taken captive by English fishers in 1819 and sent to an Anglican missionary, where Beothuk vocabulary was recorded on paper. Word lists transcribed by Europeans in the 18th or early 19th centuries indicate that the Beothuk language was part of the Algonquian language family. (See also Indigenous Languages in Canada.)

The earliest mention of the Beothuk in European records was perhaps in 1501, when Italian diplomat Alberto Cantino wrote of about 50 Indigenous men and women captives — possibly Beothuk — who he had seen in Lisbon, Portugal. During the era of contact, some European explorers captured and sent Indigenous peoples to Europe to be slaves or to serve as living examples of the “exotic” New World. Most of these captives died on the way to Europe or shortly after they arrived. There is no confirmation, however, that the captives Cantino saw were Beothuk. (See also Slavery of Indigenous People in Canada.)

During the 1600s, the Beothuk encountered European fishermen who constructed and worked at temporary campsites in the summertime along the Newfoundland coast. The Beothuk retrieved and reworked the metal objects the European fishermen left behind when they returned to Europe in the fall (such as nails, fish hooks and scraps of iron) into arrowheads, blades and other tools. The Beothuk therefore received European goods without participating in the traditional trade network developed between most Indigenous peoples and Europeans during this time.

The establishment of permanent European settlements in the 1700s significantly altered the Beothuk way of life. With the French at Placentia and the English settled in areas from Conception Bay to Bonavista Bay, the Beothuk withdrew from European contact and became increasingly isolated. By the mid-1700s, English settlement in Newfoundland increased. The Beothuk now had to compete with white fur trappers who were familiar with the Newfoundland interior. (See also Fur Trade.) In addition, they were increasingly denied access to bays where they fished. This created tension, and at times, conflict, between the Beothuk and the Europeans.

By the early 1800s, their population was subsequently reduced, as they were forced to live along the Exploits River system and subsist on the inadequate food and shelter resources of the interior. Some historians also argue that European disease — namely tuberculosis— may have contributed the reduction in their population. During this time, the Beothuk were displaced, and some were forcibly taken by Europeans or killed.

Perspectives on the Beothuk in Canadian History

As a result of European encroachment, slaughter, and diseases to which they had no natural resistance, the Beothuk’s numbers diminished rapidly following contact. Canadian history books often state that the Beothuk subsequently disappeared and that Shawnadithit, who died in 1829, was the last Beothuk. Scottish merchant and naturalist William Cormack, who helped Shawnadithit record aspects of Beothuk culture before she died, likely believed that she was the only survivor. From there on, western accounts generally agreed that the Beothuk were extinct.

Modern and nuanced approaches to history as well as Indigenous oral histories challenge this view. The Mi’kmaq have always maintained that the Beothuk are not extinct. The Mi’kmaq argue that the Beothuk fled coastal areas after increased European settlement and found refuge among other Indigenous nations along the mainland. Some accounts also suggest that the Beothuk intermarried with Vikings, and might therefore have descendants living in parts of present day Iceland. These theories resist the idea that the Beothuk have completely disappeared.

In 1827, William Cormack took the skulls of two Beothuk people, Demasduit and her husband, chief Nonosabasut. He sent them to his mentor Robert Jameson, a professor of natural history at the University of Edinburgh, Scotland. The remains were eventually housed at the National Museum of Scotland. In 2015, Chief Mi’sel Joe of the Miawpukek First Nation at Conne River, began a process to repatriate their remains. He travelled to Scotland to view the remains and performed a sweetgrass ceremony for the Beothuk people, a spiritual purification ritual meant to wash away negative thoughts and feelings.

In February 2016, Newfoundland and Labrador premier Dwight Ball officially wrote National Museums Scotland to ask them to return the Beothuk remains to Canada. This was followed by a similar request from the federal minister of Canadian Heritage, Mélanie Joly, in November 2017. In January 2019, Gordon Rintoul, director of National Museums Scotland, announced that an agreement was reached with Canadian authorities to have the remains returned to Canada.

Chief Mi’sel Joe believes that the repatriation of Demasduit and Nonosabasut’s remains could help to lessen Newfoundland’s “dark history.” In the past, Newfoundland’s school curricula blamed the extinction of the Beothuk on the Mi’kmaq. It accused the Mi’kmaq of killing off the Beothuk at the request of the French. The repatriation, Chief Mi’sel Joe believes, could lead to a chapter of reconciliation for the Indigenous and non-Indigenous peoples of Newfoundland and Labrador. 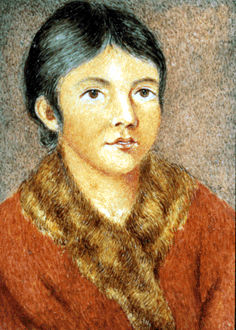