Little is known of Shiwak’s early life, although it appears that a doctor with the Grenfell Mission named Harry Locke Paddon arbitrarily changed the family name from Sikoak (meaning “relating to thin ice”). His family lived in Cul-de-Sac at the narrows to Lake Melville, near the town of Rigolet.

Like other young Inuit, Shiwak would have learned to live and survive in the northern wilderness. This included hunting, fishing and trapping, using rifle, dog team and boat. In particular, “swatching,” or shooting seals when they briefly exposed their heads above the water as they came up for air, would have provided excellent training for a future army sniper.

Shiwak left home in 1901 for employment elsewhere and may have worked at a seasonal fur and salmon factory run by the Hudson’s Bay Company at Rigolet. It is known that his two younger brothers, Wilfred and William, worked there. During the summer, Shiwak worked for a doctor (perhaps the one who changed the family name) and trapped for several winters.

In August 1911, Shiwak met novelist William Lacey Amy on a coastal steamer from St. John’s to Rigolet, during a trip financed by Shiwak’s trapping. Shiwak and Amy corresponded regularly, and their letters form the basis of the accounts of Shiwak’s early life. Amy described Shiwak, who was self taught, as “a natural poet, a natural artist, a natural narrator.” He also said that Shiwak mentioned his desire to be a soldier in his letters.

Shiwak’s interest in the military could have been the result of his contact with the League of Frontiersmen, a paramilitary organization that had been founded in Britain in 1904 and was established in Newfoundland and Labrador in 1911.

After the Great War (First World War) began in August 1914, Shiwak enrolled in the Newfoundland Regiment in St. John’s on 24 July 1915 and persuaded three other men from his area to join — two Inuit and a White man. In total, approximately 60 men from Labrador served in the Great War.

Shiwak’s Attestation Paper — the official document by which soldiers enrolled — notes that he was only five feet, five inches (1.65 metres) tall and weighed 132 pounds (59.9 kilograms). He was part of a contingent of recruits that left St. John’s on 27 October and travelled by train and ferry to Québec City. They departed Québec City aboard His Majesty’s Transport Corsican for Devonport, England, and arrived there on 9 November 1915.

In Britain, Shiwak and comrades were sent for training to the regiment’s depot at Ayr, Scotland. He arrived on the Western Front in France on 24 July 1916, exactly one year after he had joined the regiment, and was sent to C Company. As a British subject in the decades before Newfoundland joined Confederation (1949), Shiwak would have been part of the British Expeditionary Force (BEF) in Europe.

More importantly for the unit, it was only three weeks after the Newfoundland Regiment had been virtually wiped out at the Battle of Beaumont-Hamel on 1 July, part of a larger, infamous bloodbath known to history as “the first day on the Somme.” Of the 767 Newfoundlanders who went “over the top” that morning, only 58 were not killed, wounded or missing. Today, 1 July is not only celebrated as Canada Day in Newfoundland, but more importantly as Memorial Day in honour of the deaths and severe injuries that affected so many families across Newfoundland.

For the next 15 months, Shiwak survived the chaos of trench warfare, along the way proving to be an outstanding scout and sniper. A British officer called him “the best sniper in the British army.” Shiwak’s performance in these roles resulted in his appointment as lance corporal on 16 April 1917, the first rung on the junior-leader ladder.

Initially, Shiwak was timid around his fellow soldiers, but eventually made friends among them. One of his friends, Newfoundlander Howard L. Morry, described him as “shy and lonely,” a “great shot” who remarked that “sniping was like swatching seals.” Despite his success as a sniper, Shiwak grew increasingly depressed as he witnessed the daily slaughter that was part of trench warfare on the Western Front. His final months were marked by more depression and loneliness, especially after the death of a close friend and fellow trapper from Labrador. 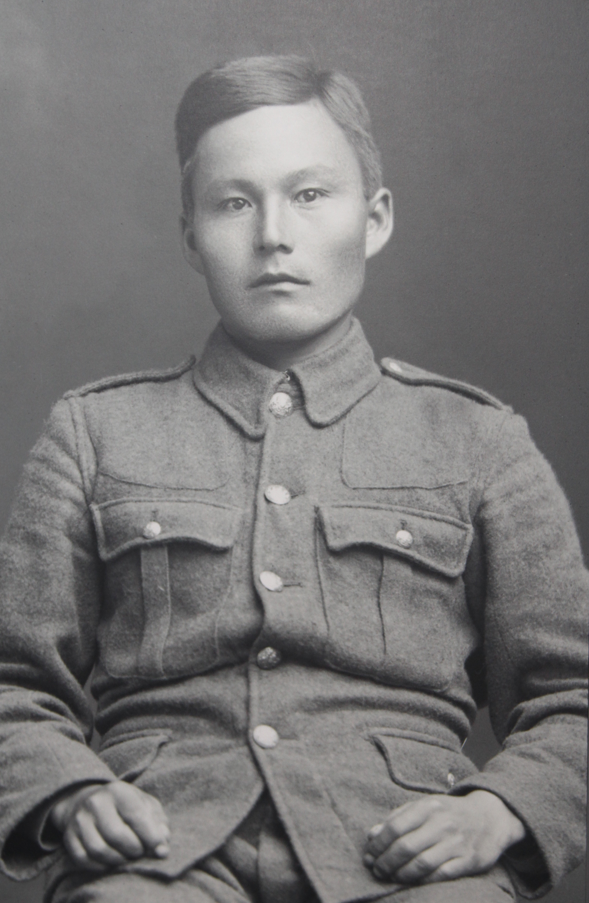 On 21 November 1917, Shiwak and other soldiers were walking along a canal bank toward a sugar factory in Masnières, France, during the Battle of Cambrai. Suddenly, a German artillery shell exploded in the middle of the column, killing seven and wounding ten. One of those killed was Shiwak.

The dead were buried in temporary battlefield graves nearby. Unfortunately, the area was fought over and shelled many times afterward, obliterating all signs of the graves, which are lost forever.

Although his burial site is unknown, Shiwak’s name is inscribed on the memorial plaque on the magnificent Caribou Monument at the Beaumont-Hamel Newfoundland Memorial in France, along with 819 other Newfoundland and Labrador soldiers who also have no known graves. The memorial stands on the site where the terrible battle occurred on 1 July 1916. A caribou monument was also built in Bowring Park, St. John’s.

In a February 1918 letter to Shiwak’s family, Captain Robert (“Bert”) Holland Tait, the regiment’s adjutant, noted that Shiwak was “a great favourite with all ranks, an excellent scout and observer, and a thoroughly good and reliable fellow in every way.” Like his fellow soldiers, Shiwak earned the British War Medal and the Victory Medal for his service.

Although Shiwak did not survive the war, his record as a sniper makes him one of the outstanding soldiers of the Newfoundland Regiment. Additionally, as one of the few Inuit soldiers to serve during the First World War, Shiwak was a trailblazer for his people (see Indigenous Peoples and the World Wars). In 2014, a new residential wing at Memorial University of Newfoundland was named Shiwak Hall in his honour.