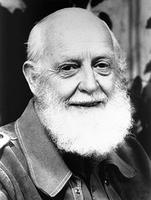 Alfred Earle Birney, poet (b at Calgary 13 May 1904; d at Toronto, Ont 3 Sept 1995). Beginning with David and Other Poems (1942), Birney's poetry consistently explored the resources of language with passionate and playful curiosity. Birney spent his childhood in Alberta, first on a farm near Ponoka and later in Banff. He was educated at the University of British Columbia, the University of Toronto, Berkeley and the University of London, where his primary interests were in Old and Middle English, culminating in a dissertation on Chaucer. Throughout his career he was an experimental poet, publishing over 20 books of verse that vary as widely in form and voice as they do in subject. His poems reveal his constant concern to render his encyclopedic experience - be it of Canada's geographical or cultural reaches, of nature, of travels or of the trials of love by time - into a language marvellously dexterous and supple, always seriously at play.

Birney also had an important career as a teacher of creative writing and literature, and as a playwright, novelist and editor. He taught at several universities, most notably at UBC (1946-65), where he founded and directed the first Canadian creative writing programme. His work led to the establishment at UBC of Canada's first Department of Creative Writing in 1965. In this same year, Birney was appointed as the first writer-in-residence at the University of Toronto. But his greatest contribution has been to 20th century Canadian poetry.

Birney won the Governor General's Award for poetry twice (for David, 1942, and for Now Is Time, 1945). His darkly comic WWII novel Turvey won the Stephen Leacock Medal in 1949. He received the Lorne Pierce Medal for Literature in 1953. Later works includeCopernican Fix (1985), Words on Waves: Selected Radio Plays (1985) and Essays on Chaucerian Irony (1985). His memoir is titled Spreading Time: Remarks on Canadian Writing and Writers 1904-1949 (1989). His final collection, Last Markings (1991), was published after a disabling heart attack in 1987.

In long poems and lyrics, sight poems, sound poems and found poems, whether on the page or in his collection of recorded poems with the percussion ensemble Nexus (1982), Birney demonstrated his deep commitment to making language have meaning in every possible and eloquent way.