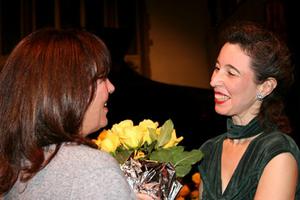 Angela Mary Hewitt, OC, OBE, pianist (born 26 July 1958 in Ottawa, ON). Angela Hewitt is an internationally renowned pianist possessed of exceptional authority, polished technique and deeply expressive musicality. Widely considered the best interpreter of the keyboard music of J.S. Bach since Glenn Gould, she is also known for her command of a vast repertoire, as well as her clarity and precision. She has made many acclaimed recordings, won various international competitions — including the prestigious 1985 Toronto International Bach Piano Competition — and has received numerous Juno nominations and awards. She is a fellow of the Royal Society of Canada, and an Officer of both the Order of Canada and the British Empire.

The daughter of English-born cathedral organist Godfrey Hewitt, Angela Hewitt was raised in a musical family in Ottawa. She began learning piano at age three with her mother, music teacher Marion Hewitt, and at age five won her first scholarship. At nine she gave her first recital at Toronto's Royal Conservatory of Music, where she studied with Earle Moss and Myrtle Guerrero from 1964 to 1973. She also studied violin (with Walter Prystawski 1970–74), recorder, ballet and Highland dancing. She has credited her early dance training with her affinity for Bach’s dance forms.

She then studied with French pianist Jean-Paul Sévilla 1973–77) in Aix-en-Provence, France, and at the University of Ottawa, where she studied piano accompaniment with Evelyn Greenberg and obtained her Bachelor of Music degree at age 18. From 1978 to 1985 she lived in France, where she studied briefly with pianists Catherine Collard and Vlado Perlemuter.

Hewitt's international career was truly launched in May 1985 when she was awarded first prize in the Toronto International Bach Piano Competition. The prize included the release of a solo album on the Deutsche Grammophon label, as well as performance engagements in Canada and Europe, all of which helped establish her as one of the world’s outstanding Bach pianists.

As a recitalist, Hewitt made her New York debut at Alice Tully Hall in 1984 and her London debut at Wigmore Hall in 1985. The following year, she was named artist of the year by the Canadian Music Council. In 1987, she performed the complete solo piano works of Maurice Ravel in London and Canada. In 1994, as an original member of the association Piano Six, she gave recitals in rural Canadian communities.

Hewitt has performed with every major Canadian orchestra and with top orchestras throughout the United States, Europe, England, Japan, Australia, Mexico, Israel, Korea and China. She is known for her busy international touring schedule (typically up to 100 concerts in 10 months per year), which includes solo recitals, concerto appearances and chamber music. She appears often in London at Wigmore Hall and Royal Festival Hall, and returns regularly to Canada.

Notable among her appearances were her performances in 2000 of Bach’s complete preludes and fugues. In 2005, she founded the Trasimeno Music Festival in Umbria, Italy, which offers live performances, lecture-demonstrations, and master classes for young pianists. During 2007–08, Hewitt toured Bach's Well-Tempered Clavier, giving 110 performances in 25 countries, for which Hyperion released a DVD lecture-recital "Bach Performance on the Piano." In 2012, she performed Bach’s The Art of the Fugue on tour.

In the early 1990s, Hewitt embarked on a demanding multi-year project for Hyperion Records to record the numerous keyboard works of Bach. She often wrote the liner notes as well. Her Well-Tempered Clavier Book I was recognized with her first Juno Award for Classical Album of the Year: Solo or Chamber Ensemble in 1999, and was named one of BBC Music Magazine's top 50 CDs.

Hewitt’s highly regarded recording projects also include all the piano works of Schumann and the complete Beethoven piano sonatas. She completed her 11-year Bach recording project in 2005 ("effortlessly eclipsing all others," stated one review; “one of the record glories of our age,” said The Sunday Times) and received a Juno Award that year for Bach: The English Suites. In 2010, publishers Boosey & Hawkes released Angela Hewitt’s Bach Book, a collection of arrangements, transcriptions and new commissions.

The Guardian has called Hewitt "the pre-eminent Bach pianist of our time," but her mastery of music by French composers such as François Couperin, Olivier Messiaen and Maurice Ravel has also earned her much esteem. Her additional repertoire varies widely from the Baroque to the 21st century. She has also performed works by Canadian composers including Barbara Pentland, Oskar Morawetz, Gary Kulesha, Patrick Cardy, David McIntyre and Alexina Louie. The composers Steven Gellman and Gary Hayes have written pieces for her.

Hewitt has been based in London, England, since 1985, but maintains residences in Ottawa and Umbria, Italy.