A group of barren-ground caribou in the Northwest Territories. 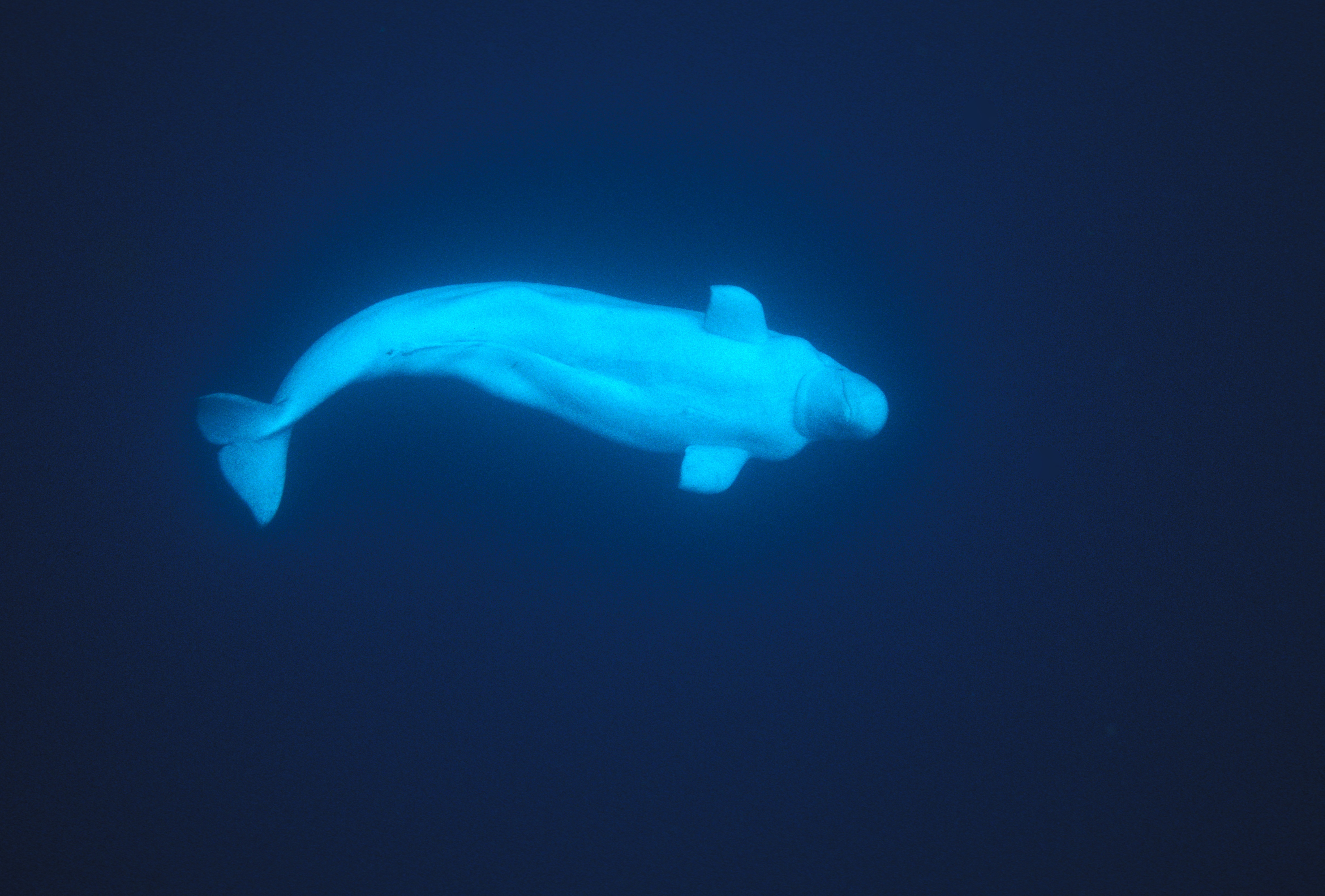 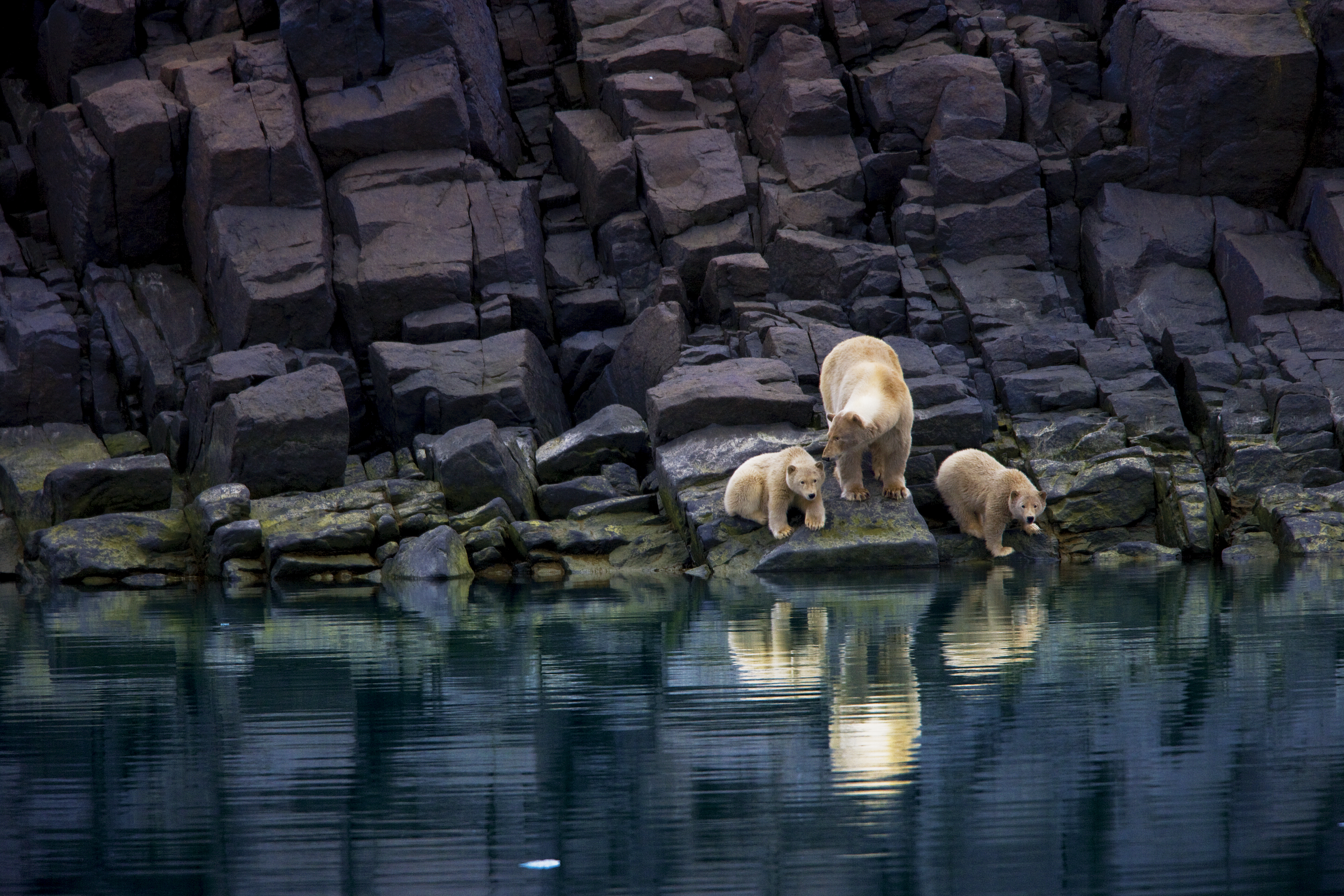 Without ice, a mother bear and cubs are stranded on a rocky shoreline. 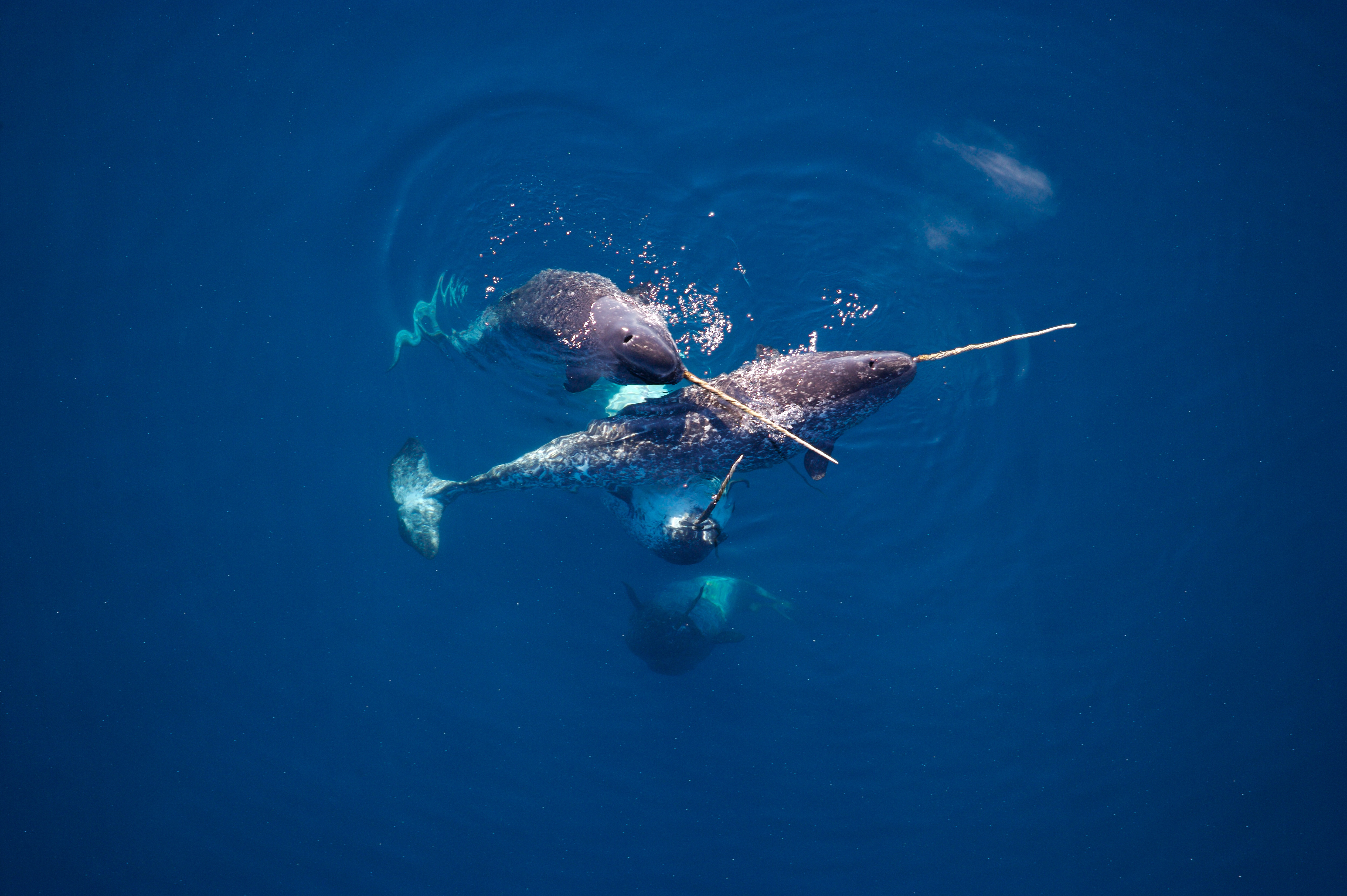 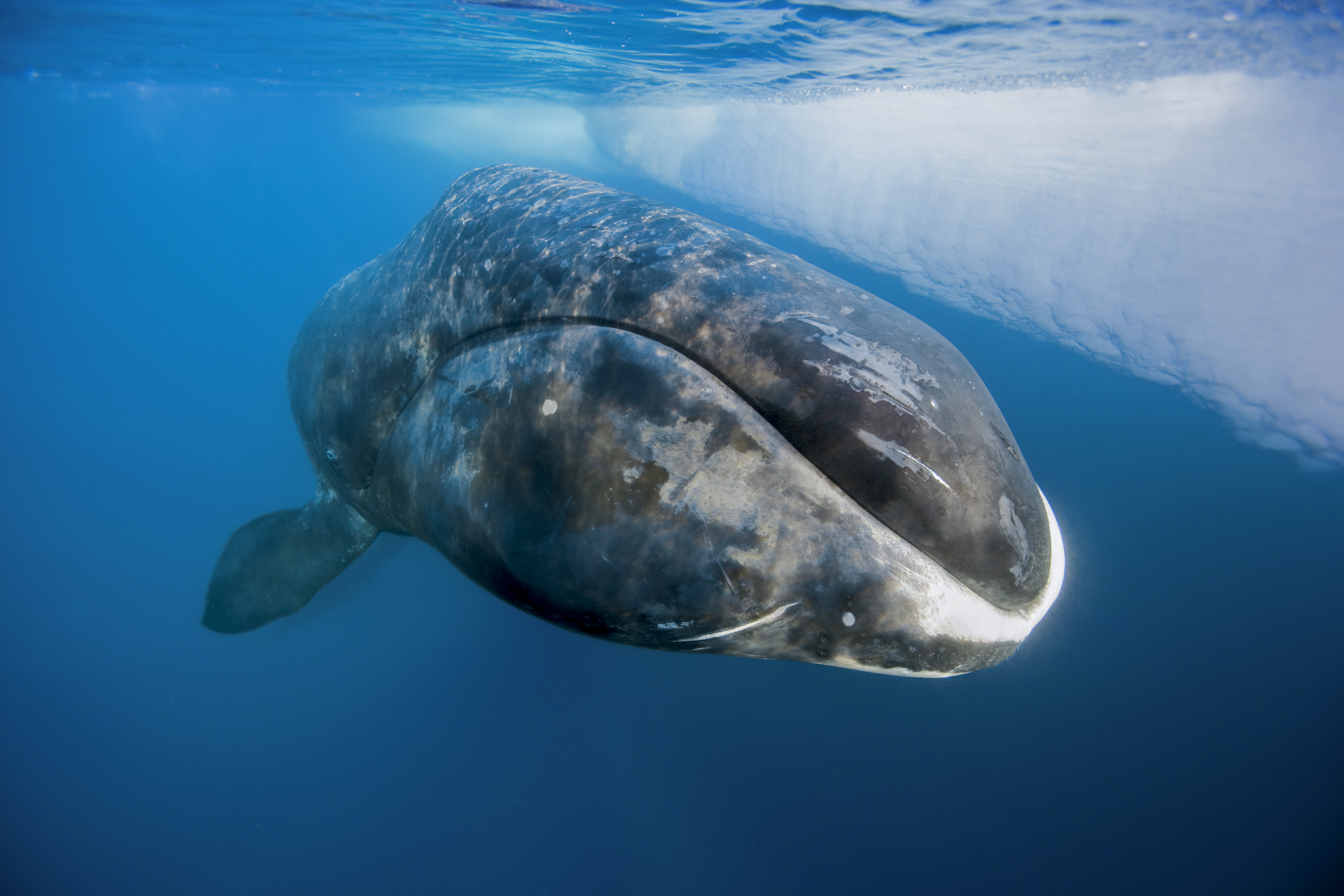 A bowhead whale surfaces from a dive in Lancaster Sound, Nunavut.
PreviousNext

Modern arctic land fauna in Canada may be traced back to the Pleistocene epoch (see Ice Age). A few thousand years ago, during the last continental glaciation, thick sheets of ice covered most of Canada and much of the northern United States. Arctic animals have descended from species that occupied land that revegetated after the retreat of the ice.

The Arctic is that part of the world lying north of the Arctic Circle, beyond which there is at least one day of the year when the sun never sets and one when it never rises. On land, this ecological division is marked by the treeline; at sea, the boundary begins where the characteristically cold, low-salinity Arctic waters meet the Atlantic and Pacific Oceans. Reptiles and most hibernating mammals are not found in regions of continuous permafrost. Mean annual temperatures are below freezing and the ground remains frozen at depth; therefore, no warm layer persists near the surface through the winter. Because trees are absent, certain boreal-zone insects, rodents, carnivores and birds that depend on them for food and shelter disappear.

Open water is scarce in most of the Arctic throughout most of the year. Except where rapids and tide rips occur, solid or densely packed ice generally forbids access to the aquatic environment. Animals wintering on the Arctic tundra must quench their thirst with snow. Fish-eating birds and mammals typically migrate for the winter to areas that provide better access to prey. The remainder congregate at scattered polynyas (i.e., ice-free refuges).

The characteristic that most restricts opportunities for animal life may be the brevity of the arctic growing season. Land vegetation produced in the few but long days of the arctic summer must sustain life over an extended, harsh and demanding winter. Like fish-eating birds and mammals, other animals also pass the winter elsewhere: birds flock to ocean coasts farther south and to interior plains and forest lands; and many barren-ground caribou travel to the lichen pastures of the boreal forest.

The short growing season tends to squeeze certain species out of Arctic ecosystems entirely. Beyond the edge of the barrens, it is rare to encounter the plagues of blackflies inevitable in the boreal forest. The absence of bats and swallows might be attributed to the short period in which flying insects are available as food.

Another serious constraint on animal life is the dangerous heat loss caused by a low winter temperature and high wind chill. This factor means warm-blooded animals need a dense insulating coat. With a thicker coat, Arctic animals are generally large. The larger the animal, the greater the body mass to skin-surface ratio, and the smaller the relative heat loss. Northern ravens and Arctic foxes are the smallest animals found above the snow surface during the Arctic winter.

Hard-packed snow means certain animals — for example, grouse and ungulates — use the softer drifts of the boreal zone for shelter. Animals using the solid Arctic snowdrifts for shelter include the collared lemming, which grows special winter claws for the purpose, and the polar bear, which burrows in for its winter and maternity dens. The ringed seal is unique in constructing its maternity den in snow on the surface of sea ice that extends from the coastline.

Food sources may be few, sparse and fleeting. Most Arctic species have adapted, and as a result are quite opportunistic. To the south, insects typically feed on only one plant species and birds and mammals have relatively fixed diets. In the Arctic, exploitation of broader food resources is common. For example, polar bears subsist on diverse and meagre resources, both terrestrial and aquatic, for long periods each year. Among birds, the long-tailed jaeger is equally well adapted. During the brief Arctic summer it eats terrestrial arthropods, birds, lemmings, seafood and carrion.

Compared to temperatures on land, sea and lake waters remain within a narrow temperature range year-round. However, the seasonal fall in temperature profoundly affects the aquatic environment by causing surface water to freeze to a depth of 2 m or more. Ice, particularly when covered with snow, impedes the solar radiation necessary for photosynthesis. Furthermore, bottom freezing and scouring by drifting ice floes greatly reduces the productivity of arctic intertidal and nearshore marine zones. Marine productivity is comparatively low as plants and animals are limited by cold temperatures and the availability of nutrients and light. Because of dangerous ice cover and limited winter productivity, several populations of marine mammals spend the winter in open and more productive seas. 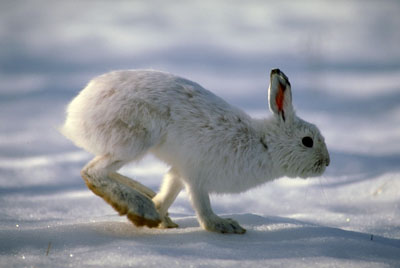 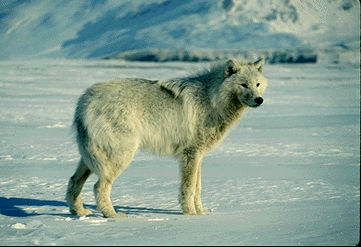 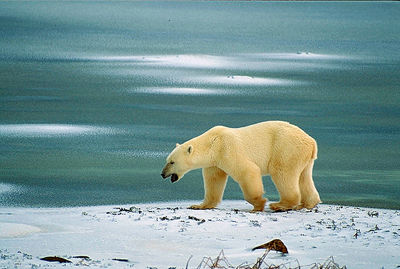 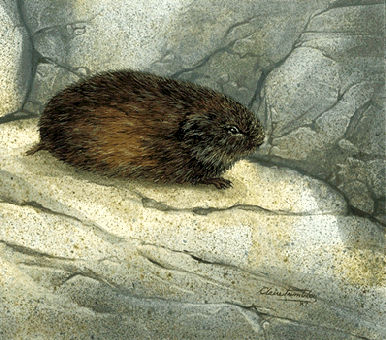 Lemmings do not make spectacular suicide marches to the sea, as related in folklore (artwork by Claire Tremblay). 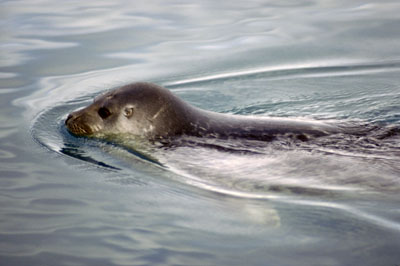 Algae feeds zooplankton, which is in turn preyed upon by Arctic and polar cod, murres, guillemots and marine mammals such as the ringed seal. Algae also feed the molluscs, which sustain the walrus. The predators highest in the food chains of the Arctic seas are polar bears and killer whales; important scavengers include glaucous gulls, amphipod crustaceans (which attack fish and seal carcasses left too long in nets) and Greenland shark (lethargic fish attaining lengths of about 3 m). The Arctic char, the most important Arctic food fish, lives its first year in lakes but, where passage exists, takes up an anadromous habit later in life (i.e., it migrates to coastal waters for the summer to feed on crustaceans and other small marine animals and returns to spawn in lakes in autumn).

The Arctic fauna forms the basis for local subsistence economies and, being partly migratory, supports food, trade and recreation elsewhere in the world. Snow geese hatched in the Canadian Arctic are hunted as far south as the rice fields of Texas; harp seal populations, which summer in Arctic waters, are harvested in the Gulf of St. Lawrence.

The earliest known Arctic peoples used small stone blades and points suitable for killing thin-skinned game, such as caribou and birds. Later cultures depended on sea mammals, particularly the bowhead whale. This, the largest Arctic species, was greatly reduced by American and Scottish whaling in the late 1800s.

The Inuit have also depended on sea mammals, particularly the ringed seal, which stays in the frozen Arctic bays and straits all winter, scratching breathing holes through the ice. The hunter waits at such a hole and harpoons the animal as it rises to the surface.

Seals provided fuel (seal oil), skins (used for summer boots and tents) and meat. Caribou killed in August, when the new hair is still short and fine, provided the most popular clothing skins. Muskox robes and skins of caribou killed in winter were used for bedding. The trade in Arctic fox furs began in earnest in the early 1900s.

With increased social and industrial development, the conservation of Arctic fauna demands more attention. Recent developments include restrictions by the US on the import of sea mammal products; imposition by the International Whaling Commission of quotas on the take of bowhead whales by Indigenous hunters in Alaska; signing of an international convention on the conservation of the polar bear (particularly on the high seas) by the US, Norway, Denmark, the former USSR and Canada; and the devolution of game management authority to Inuit organizations in Canada after land claim settlements.

Oil exploration and production, offshore drilling and year-round shipping is of the greatest concern to environmentalists and Indigenous groups. Other threats to Arctic animals include the impact of pollution (both industrial and military), the effects of climate change (including melting sea ice) and more harvesting pressure as human populations grow. 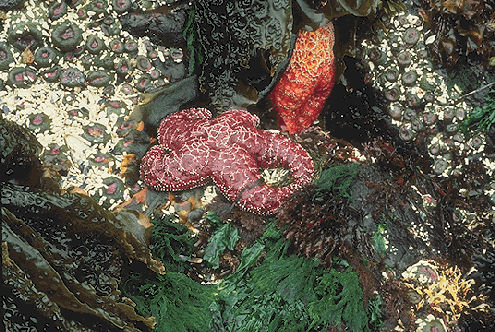 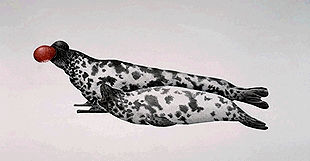