Athabasca is located on the traditional territory of the Cree and Métis people. The town is covered by Treaty 6, signed in 1876. However, the area also abuts Treaty 8, signed in 1899. 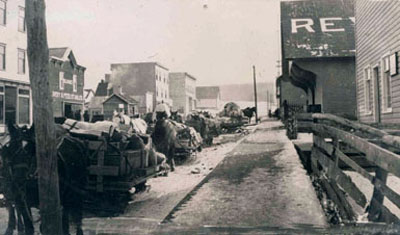 Athabasca Landing in 1910. For 40 years the community was an important transportation centre for Canada's North.

Athabasca, originally known as Athabasca Landing, was major freighting departure point for the North. The Landing reached its zenith during the Klondike era. It was incorporated as a town in 1911, and changed its name to Athabasca in 1913. The Canadian National Railway reached Athabasca in 1912. In 1919, the Alberta and Great Waterways Railway and the Edmonton Dunvegan and British Columbia Railway were completed. The arrival of these railways diminished the town’s importance as a transportation hub.

Athabasca became a local agricultural service centre. Today it is the home of Athabasca University, Canada’s “online university.” The world’s largest and technologically most sophisticated bleached kraft pulp mill is also located nearby.