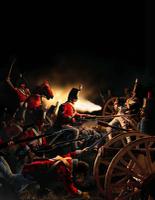 British Red Coats on the field at the Battle of Stoney Creek. The engagement at Stoney Creek returned the Niagara Peninsula to British and Canadian control and ended the US attempt to conquer the western part of the province (painting by Peter Rindlisbacher).

Stoney Creek National Historic Site commemorates a British victory over American forces at the Battle of Stoney Creek fought on 6 June 1813 in the settlement of Stoney Creek, now part of the city of Hamilton. This War of 1812 battle allowed the British to push back towards the American-held Fort George, which kept the invading Americans bottled up there until they finally retreated.

The battlefield was revered as a significant site by local residents who formed the Wentworth Pioneer and Historical Society in 1889 with a goal of commemorating the battle with a suitable monument. In 1899, an auxiliary organization, the Ladies' Committee of the Wentworth Historical Society, formed a separate organization, the Women's Wentworth Historical Society. The 2 organizations were at odds over what would be the most suitable monument to commemorate the battle. The women's group purchased the James Gage house and proposed that a monument be erected on the escarpment behind the house where the Americans had set up their headquarter tents. The Wentworth Historical Society planned a more modest structure on Smith's Knoll, the most hotly contested spot on the battlefield. In the end, both were built, largely with funds from the Government of Canada. The smaller Lion's Monument was unveiled on 1 August 1910 and the larger Battlefield Monument was opened on 6 June 1913 with great ceremony, with Queen Mary unveiling the structure remotely from Buckingham Palace at the touch of an ivory telegraph key. In 1960, the Historic Sites and Monuments Board of Canada recognized the battlefield as a site of national significance, and a bronze plaque was added to the larger monument in 1968.

Today, the city of Hamilton operates the Historic Site as the 13-hectare Battlefield House Museum and Park. The Battlefield Monument is the centrepiece of the park and the Lion's Monument is located across King Street in a smaller park. The site is noted for its annual battle re-enactment presented each June.

Overview of the Battle

Following the American capture of Fort George on 27 May 1813, the British garrison under the command of Brigadier-General John Vincent retreated to Burlington Heights in present-day Hamilton and fortified the heights against a possible American attack. After several delays, counter orders and false starts, an American army under the command of Brigadier-General William Winder began to pursue Vincent and was joined at Forty Mile Creek by another American force under Brigadier James Chandler. Chandler took charge of the combined army, now numbering more than 3000 men, and marched as far as Stoney Creek that evening with the intention of cutting off the British at Burlington Heights on the following day.

At Burlington Heights, Vincent was aware of the American advance and because of the danger to his smaller army, was convinced to order a night assault on the American camp. A force of 704 infantrymen, primarily from the King's 8th and 49th regiments, along with about 20 artillerymen, 30 militia volunteers and 12 Mohawk allies, silently approached the camp after midnight on 6 June. They overwhelmed American sentries guarding the approach to the spread-out American encampment and attacked the unsuspecting Americans in a wild bayonet charge.

In the confusion, both American generals Winder and Chandler were captured and more than 30 American soldiers were killed. British casualties included more than 23 killed and some 135 wounded. As dawn approached, the British broke off the attack and returned to Burlington Heights before the Americans could see how few British soldiers there were in the attacking force. As dawn broke, the Americans retreated back towards Fort George.