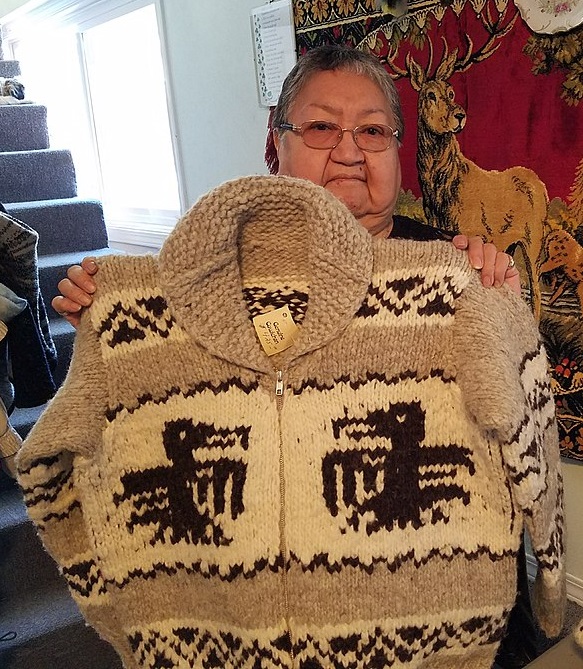 Before European contact, Cowichan women wove blankets out of mountain goat and dog hair, with the oldest surviving remnants dating between 300 and 500 years old. By the end of the 19th century, many weavers stopped making handwoven blankets and took up knitting needles instead. The influx of the Hudson’s Bay Company’s Point Blankets and the difficulty in maintaining a steady supply of goat and dog hair used in the manufacture of wool for the blankets made handweaving more challenging.

It is not known for certain how knitting first emerged among the Coast Salish. One theory is that Jeremina Colvin, an immigrant to the Cowichan Valley from the Shetland Islands (located northeast of Scotland) in the late 1880s, taught Indigenous women how to card, spin and knit. Some believe Colvin taught them the Fair Isle style of knitting; a technique which came out of the Shetland Islands that created row patterns with multiple colours, similar to a Cowichan sweater design. However, the Cowichan sweater remains unique because of its heavy, unprocessed hand-spun wool, geometric patterns, colour and design.

A second theory is that the Sisters of St. Ann, a Roman Catholic institution founded in Quebec to promote the education of rural children, brought knitting to the West Coast. In 1858, four Sisters of St. Ann traveled from Montreal to Victoria to open a schoolhouse for the local children. In 1864, the Sisters established a second school in Duncan, British Columbia, for Indigenous girls. While the children at both schools received an elementary education, they were also made to learn domestic skills, such as knitting, which were considered a means to assimilation. This tradition of teaching knitting in residential schools continued well into the late 1960s.

Competing theories aside, the Cowichan sweater remains unique because it combines the old practice of Coast Salish weaving with European knitting techniques. Textile expert Priscilla Gibson-Roberts affirms that when Salish women and girls were first taught how to knit, they were not satisfied with the patterns, and therefore incorporated designs from traditional weavings. Some of the two-colour patterns of traditional Cowichan blankets have carried into the modern-day Cowichan sweater.

The earliest record of the Cowichan sweater is from the early 1900s. During this time, only Coast Salish people wore the sweaters. However, by the 1920s, during a period when Indigenous crafts were seen by settlers as valuable collectibles, the sweaters attracted the attention of outsiders. Indian agents — the federal administrators of Indigenous policy — sent the garments to fairs and exhibitions, raising their profile in the non-Indigenous marketplace. In response to this interest, knitters began to sell their sweaters to merchants in downtown Duncan, Victoria and Vancouver.

By the 1930s, the Canadian government tried to reinforce the commodification of the sweaters by teaching knitting in residential schools so that the sweaters could produce more income for Indigenous communities. As H. Graham, a Cowichan Indian agent explained in the local newspaper, The Cowichan Leader, in 1934, “the increased business with the sweater has been of great assistance to the welfare of the Indians themselves, and in this way [is] of indirect benefit to the Dominion Government.” Eventually, knitting became a secondary source of income; as women sold their knitting, they traveled around British Columbia and Washington State, while also completing seasonal work, including berry picking and fish canning.

Coast Salish knitters have always made a meager income from the sweater. One reason is that, in order to sell the sweaters at certain stores, many knitters were forced to pay for overpriced wool from the same store. In addition, buyers did not offer fair prices to the knitters. Due to the isolation of most Coast Salish communities in the 1930s, they were dependent on middlemen buyers to move their product to the marketplace. The Indian Act reinforced this dependency; on reserve, Indigenous people could not get bank financing to build their own businesses. Lastly, the commodification of the sweaters created a market for mass-produced and cheaply made knock-offs that was difficult for Cowichan knitters to compete in with their handmade and often more expensive products. However, many knitters have continued their practice — though most often as a part-time endeavour — as a means of providing a supplementary income for them and their families.

In 2011, the Government of Canada designated both the Coast Salish knitters and the Cowichan sweater as nationally and historically significant for their innovativeness.

DID YOU KNOW?
Federal and provincial governments have often gifted Cowichan sweaters as a symbol of Canada to foreign elites and celebrities, such as Pope John Paul II, Prince Charles and Lady Diana, Harry Truman and Bing Crosby.

Each Cowichan sweater has a unique design, thickness, size and shape, yet they share many characteristics. They incorporate bulky home-spun wool that is unprocessed — one of the key features that distinguishes a genuine sweater from an imitation. All of the sweaters are knit in the round, meaning they are knit in one piece, and the garment is tubular. The sweaters use two or three natural wool colours, including white, blackish-brown and grey. They also include a shawl-style collar and a v-neck with extra folded fabric on the back of the neck.

Cowichan sweaters have several horizontal bands of designs, often including a geometric pattern repeated in the waist and shoulders, and a non-geometric figure in the centre, all of which are continued on the back and on the sleeves. While the original sweaters were pullovers, newer designs feature the addition of buttons or zippers. (After the sweater was knit, the fabric was cut and the additions sewn in.) The sweaters are warm and durable — features that made them popular in the 19th and early 20th centuries.

The designs of Cowichan sweaters come from a variety of sources. Some are copies of traditional Coast Salish blankets and baskets, while others are taken from everyday items, from floor tiles to wallpaper. Some designs are only for Indigenous use and are not put on sweaters that are sold to the public. Many knitters can knit without using a pattern, and instead examine ordinary objects like tablecloths or lace curtains, and turn them into designs. Usually, patterns and techniques are passed down from generation to generation, making each family’s work slightly different.

Although each pattern may not have a specific context, for many knitters, patterns often come with personal stories that give these designs symbolic meaning. Some knitters, like Tsartlip knitter May Sam, have innovated the typical Cowichan sweater design and patterns. Sam adds felted wool tassels to her hats, uses colourful acrylic wool and creates her own patterns for unique subject matters such as different NHL team logos.

While copies of Cowichan sweaters surfaced in the 1920s, the more famous imitations came during the 1950s to 1970s, when many yarn supply stores in Canada and the United States began selling knitting patterns that mimicked Cowichan designs. By this time, Cowichan sweaters were internationally well-known. Many celebrities wore imitation designs in public, including American model and actress Marilyn Monroe during a 1962 photo shoot, and American actor Michael Glaser of the popular 1970s television series Starsky & Hutch. (See also Cultural Appropriation of Indigenous Peoples in Canada.)

Imitation sweaters made of cheaper materials had become more readily available, therefore making it more difficult for the knitters to sell their hand-made products in the same market. Some wholesalers also insisted on specific patterns for particular markets — especially in Japan — which detracted from the original designs. As the sweater became marketed as a fashion garment, many consumers could not tell the difference between the authentic sweaters and the imitations. Often, the customers did not even realize the Indigenous origins of the sweater, and in fact, many preferred buying the imitations from clothing lines with established brand names.

Since knitters could not compete with the machine-made and less expensive versions, many either stopped knitting altogether or began making lower quality sweaters as well as buying commercial wool to save time. Some Coast Salish knitters also began importing Australian wool instead of relying on local production. Therefore, by the 1970s, the sweater changed to respond to consumer demands for a sleeker, less bulky look. It evolved from a practical garment to a fashion statement, which made it difficult to identify fake Cowichan sweaters.

Knitters have various opinions of the impact of the fake sweaters. A few, such as Sarah Modeste, see some benefit in the popularity of the design. As Modeste said in an interview for Sylvia Olsen’s book Working with Wool: A Coast Salish Legacy and the Cowichan Sweater (2010): “It’s quite exciting to see one of the sweaters in Elle…It’s factory wool and factory made. But if it gives publicity to our product, I’m all for it.” By contrast, Cowichan knitter Emily Sawyer-Smith told the Times Colonist on 8 October 2009 that the imitations are “taking something away from what was originally [Cowichan].” Cowichan Tribes’ Lands Research Director Dianne Hinkley emphasized that fake sweaters also have financial implications. As she told The Citizen on 14 October 2009: “[The sweaters] could have had a huge economic impact on people that are living hand to mouth.”

In many cases, Indigneous knitters have called out brand name companies that have appropriated their designs. For example, after the Hudson’s Bay Company sold imitation sweaters during the 2010 Winter Olympics, the Cowichan people protested, eventually securing a licensing agreement with the company. In 2015, the American retailer Nordstrom removed use of the word Cowichan to describe a sweater in their collection and issued an apology.

Weaving: Weaving consists of interlacing two different sets of yarn that are run straight and perpendicular to each other in an over and under motion. Weaving is conducted either with the fingers or a loom.

Knitting: Knitting refers to the action of interlocking rows of loops of yarn (called stitches) with knitting needles or a machine.