Craig Kielburger is the second son of two teachers, Fred and Theresa Kielburger. He was raised in Thornhill, Ontario, a community just north of Toronto. By his high school years, he had already become a dedicated and high-profile children’s rights activist. In 2002, Kielburger coupled his charitable initiatives with university, entering the University of Toronto’s Peace and Conflict Studies program. In 2009, he was the youngest to ever graduate from the Kellogg-Schulich Executive MBA program at York University.

In 1995, Craig Kielburger read a newspaper article about the murder of 12-year-old Iqbal Masih, a formerly enslaved Pakistani boy, who became an activist against  child labour following his escape from forced labour. Some early reports suggested Masih was assassinated for his activism. “It really upset me,” Kielburger said. “What did the two of us have in common except our age?” He learned that Masih’s story was just one example of child labour and was so moved by the systemic injustice that he rallied some of his classmates to launch Free the Children, a youth-led advocacy group that sought to draw attention to child labour. While it later emerged that Masih may have been killed under different circumstances, Kielburger’s interest in rescuing children from slavery remained unchanged. According to Kielburger, he was driven by a conviction that youth should be participants in issues that affect them, rather than allowing adults to speak for them. The idea of children helping children, tapping into the idealism and enthusiasm of children to create social change, remains fundamental to Kielburger’s ethos.

“Children have an innate ability to feel suffering and injustice and to be far more emotional in their feelings,” he said. “They haven't accepted certain social norms, like there will always be poverty. The child who says, ‘This child is hungry; let's feed them,’ might sound naïve to an adult. In fact, that’s a compassionate, logical, very well thought of response. To say that we can end poverty in our world isn't naïve; it’s idealistic. But young people need to be shamelessly idealistic in our world because it’s the only way things will change.”


The organization’s first substantial action was a 3,000-signature petition calling for the release of child labour activist Kailash Satyarthi that was sent to the prime minister of India. Kielburger and his peers gave speeches about child labour at schools, churches and community groups (see Kielburger’s Campaign). Public attention grew after he impressed during a speech before the Ontario Federation of Labour, leading to $150,000 in donations to Free the Children.

It Takes a Child — A Journey into Child Labour

Craig Kielburger wanted to visit the countries he spoke about. With guidance and substantial assistance from activist and university student Alam Rahman, and letters of support from various human rights organizations, Kielburger and his family plotted out a seven-week trip covering cities in India, Pakistan, Nepal, Thailand and Bangladesh. He travelled over the winter of 1995–96.

On his trip, Kielburger met with child labourers and human rights organizations — experiences he later chronicled in his book Free the Children (1998), written with Kevin Major. The book also describes how Kielburger met with Jean Chrétien while the Prime Minister was in the region on a trade mission (see International Trade). During their 15-minute encounter, Kielburger encouraged Chrétien to commit to adding child labour to his trade talk agenda, and to pressure North American companies to stop trading with businesses that relied on child labour. The book also details his encounter with Mother Theresa in her mission house in Calcutta, an encounter of great meaning to the devout Kielburger (see Catholicism).

Upon his return, Kielburger became a media sensation. The well-spoken and earnest teenager had an interview on 60 Minutes, and fielded interview requests from news outlets around the world. Not all profiles were flattering. In November 1996, Saturday Night magazine ran a critical piece that, among other things, questioned the extent to which Kielburger was controlled by his parents, and suggested that Free the Children fundraising might be enriching the Kielburger family. The Kielburger family sued Saturday Night for libel. The magazine agreed to pay Kielburger $319,000 to settle the lawsuit in 2000 (see Defamation in Canada). Kielburger said he would use the funds to pay legal fees and give the remainder to Free the Children. One account of the incident alleged that the entire affair was the product of a society that disliked youth disrupting the status quo.

Marc Kielburger took on a larger role with the organization after completing his law degree at the University of Oxford, and the group focused more on attracting smaller donations from youth. As well, they redoubled their efforts towards training and education, focusing especially on building new schools in developing nations. The organization also received a substantial boost from Craig’s appearance on the Oprah Winfrey Show in 1999, which included a significant donation from Oprah herself.

Around the same time, Kielburger sought to increase corporate concern about child labour. He had returned to India in 1998, on a tour funded by a subsidiary of British American Tobacco. Craig was accompanied by other children, as well as Marc, and, on this and later tours, they sought to expose other people to the reality of child labour. From these tours, two important elements of their “Me to We” principles crystalized. One was the idea that corporations need to be involved in labour reform. The other was the conviction that sending abroad as many children as possible from developed countries (to learn about global conditions) fosters support for development.

While studying at the University of Toronto, Craig Kielburger continued to accumulate accolades, including a nomination for the Nobel Peace Prize (see Nobel Prizes). He also continued to serve as the public face of Free the Children, which continued to expand and open new schools.

In 2004, Craig and Marc publicized their guiding ideals in their book Me to We: Finding Meaning in a Material World. The book included contributions from such luminaries as Oprah Winfrey, Archbishop Desmond Tutu and Dr. Jane Goodall. The book articulated several core points of Free the Children’s “Me to We” philosophy, including the importance of community, the happiness derived from service, and the limitations of material gain. It drew on stories from their own experiences and from those of their volunteers and the people they met around the world. It sought to ground their philosophy in a broader spiritual context, partly reflecting the Kielburger brothers’ Catholic upbringing, and asserted that the “ethics of reciprocity” is universal among world religions. This Me to We perspective also became the focal point of the large youth rallies the brothers held, gathering children and encouraging them to participate in and lead charitable and community events. 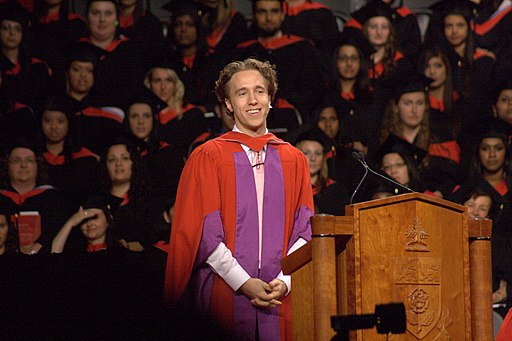 Kielburger’s MBA studies reflected his interest in combining the tools of business with his broader aim of promoting educational and social development. This drive helped reshape his social enterprise, ME to WE, which operates on a for-profit basis through the sale of products linked to social and economic development. His ambition to connect the tools of corporate development with progressive change has brought some challenges, including reports of very long workdays from employees and accusations that WE Day rallies are excessively commercialized.

Kielburger continued to enjoy a prolific public presence. In 2010, he and his brother were Toronto torchbearers for the Vancouver Olympic Winter Games. He and Marc regularly contributed articles on socially conscious living to major newspapers in Canada. In the 2015 edition of the CBC TV series Canada Reads, Kielburger defended Thomas King’s The Inconvenient Indian under the theme “One Book to Break Barriers.” He and Marc continued to lead three related organizations: WE Charity (formerly Free the Children), ME to WE, and WE Day.

In June 2020, the federal government selected WE Charity to run its $912 million Canada Student Service Grant (CSSG) program. Justin Trudeau’s Liberals created the CSSG program to support students and recent graduates facing limited job prospects during the COVID-19 pandemic. Craig Kielburger had been in contact with government offices to discuss student-oriented programs earlier in the year. The government’s choice of WE as partner drew criticism from opposition MPs. These critics expressed concern that the history of appearances by Prime Minister Justin Trudeau and several of his family members at WE events influenced the decision to award WE the contract.

Though the charity stepped away from the contract in early July, the controversy deepened for the government and WE. More details emerged that pointed to possible conflicts of interest. It came to light that several members of the Trudeau family had been paid for speaking at WE events. The charity had previously denied making any such payments. Media also reported on ties between Finance Minister Bill Morneau’s family and WE. In the wake of these revelations, Trudeau and Morneau apologized for not recusing themselves from cabinet discussions about the CSSG contract.

Questions continued to hound the Kielburgers and their organizations. Observers focused on the distinction between the Kielburgers’ for-profit and charitable entities, as well as WE’s real estate holdings worth about $40 million. According to WE’s former board chair, Michelle Douglas, Craig asked her to resign in March 2020 over her efforts to review the charity’s financial records. Douglas said that she resigned because she could not carry out her oversight duties without access to financial data.

Craig and Marc Kielburger testified about the CSSG contract to the House of Commons finance committee on 28 July 2020. They claimed that they would not have profited from the contract and that they did not use their connections to the Trudeau family to secure it.

Amid the controversy, WE Charity announced plans to “refocus” on its mission, simplify its programming and make structural and governance changes. On 9 September 2020, the Kielburgers revealed that they would close WE Charity in Canada and leave the organization at the end of that process. They cited the financial impact of the COVID-19 pandemic and WE’s loss of sponsors amid the CSSG controversy.