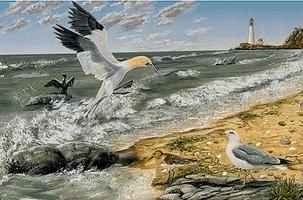 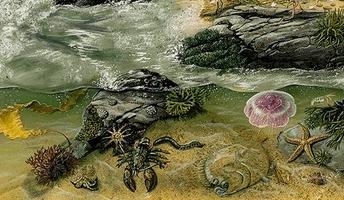 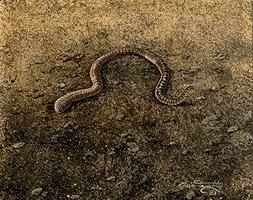 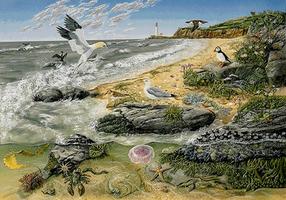 The Atlantic Maritime region extends from the mouth of the St Lawrence River across New Brunswick and into Nova Scotia and PEI. The ocean has a major impact on this zone and its wildlife (artwork by Claire Tremblay).
PreviousNext

A limited space within which living beings interact with nonliving matter at a high level of interdependence to form an environmental unit is called an ecosystem. On a large scale, ecosystems have been defined on the basis of geographical extent alone (eg, arctic, tall-grass prairie or hardwood forest). These very large areas are often called biomes. On a smaller scale (eg, dune or bog) the term refers to spatial dimensions and to precise soil conditions within which interactions among components take place.

Classic Definition
Etymologically the word ecosystem derives from the Greek oikos, meaning "home," and systema, or "system." Nineteenth- and early 20th-century ecologists, who were well aware of the complex interdependence of living and nonliving matter, coined several terms, such as biocoenosis, microcosm, holocoen, biosystem and geobiocoenosis. It was not until British ecologist A.G. Tansley proposed the word "ecosystem" (1935) that American Raymond L. Lindeman offered the now classic definition (1942). This definition says its mainspring is energy flow through several trophic levels, ensuring the transformation or transmutation of material from one state to another. Thus a food chain consists of several relays, whereby nonliving matter (ie, gaseous, liquid or solid) is turned into living tissues by plants; the latter are digested by herbivorous or phytophagous (ie, insects) animals, which in turn are consumed by carnivores, which may undergo predation by yet other carnivores.

Food Chains
Food chains vary a great deal in the number of successive transformers and in the efficiency and vulnerability of each one of them. Applications of this scheme are by now very numerous and have charted the functions of lake, swamp and forest environments. The ecosystem has usually been given the form of a triangle or a pyramid where the base represents the lowest level on the food chain and the peak the highest level. Variants of this model have found their way into most ecology and biology textbooks and have served the purposes of innumerable research papers.

The importance of the food chain as an indicator of the inner dynamics of an ecosystem is very much in evidence in so-called "natural" environments. The International Biological Programme, initiated in the mid-1960s, focused on productivity at the primary (vegetal) and secondary (animal) levels. Its attention was set exclusively on plant and animal communities in the wild. To this day, in the view of some biologists and geographers, the very notion of an ecosystem has no legitimate application to human-controlled and human-made areas.

Ball-of-Arrows Model
Many ecologists have taken exception to such a view. The development of human ecology initiated by American Robert Park in the 1920s has led to a different perspective in which agricultural, industrial and even urban spaces are considered as ecosystems.

The ball-of-arrows model extends the forces of production to those of investment and control. In it, any given ecosystem, whether natural or not, is defined by the interaction of 5 factors:

Resources
Resources are elements in the system, whether mineral, biological or functional (eg, iron, cattle, wood, information), which move through the cycling process.

Products
Products are objects or services resulting from the processing of resources by agents; they are consumed, stored, lost or reinvested for further cycling (eg, humus, starch, meat, automobile). A product arising at one level may become a resource at another level.

Trophic levels are more or less distinct stages, stratified in time and space, in which resources are carried from one state to another (eg, from mineral to plant). Each level is characterized by associated and more or less exclusive processes which make up the regime: (I) minerotrophy, the lowest level (eg, disaggregation, weathering, erosion); (II) phytotrophy (eg, photosynthesis, respiration, rooting, dispersion); (III) zootrophy (phytophagy or herbivory); (IV) zootrophy (carnivory or predation); (V) investment or technotrophy (eg, damming, plowing, construction, urbanization); and the highest level, (VI) control or noötrophy (eg, zoning, planning, financing, legislation).

The interaction of these 5 factors results in a more encompassing definition. An ecosystem is, then, a defined space in which cycling of resources through one or more trophic levels is effected by more or less numerous agents using mutually compatible processes (simultaneously or successively) to generate products usable in the short or long term.

This model lends itself to an indefinite variety of applications. It allows for the flow of energy upwards and downwards from any one of the 6 trophic levels to any other one. It also permits the input of resources from one or more other ecosystems and for the output of its products or wastes in the direction of other ecosystems. It remains to identify the materials or information that are carried in such a flow. Thus, the metabolic regime at the phytotrophic level converts plant tissues to be processed by insects at the zootrophic level.

Consequently, ecosystems will differ from one another in several respects: the distribution of trophic loads, relative anatomy and position in the regional mosaic.

Networks of ecosystems will provide an account of local and regional dynamics through the identification of the resources that actually flow through the arrows within the ecosystem and from one ecosystem to and from all those with which it is in a position of exchange. Thus, an orchard will have the following suppliers: an industrial plant will convey fertilizers to level I; a nursery will send young plants to level II; a beehive will provide pollination at level III; agricultural machinery will be imported at level V; governmental agents will impose market restrictions at level VI. On the other hand, clients for the product (apples) of level II are quite numerous, from the market to private homes, fruit-processing plants, distilleries and candy and pastry shops, all of them being distinct ecosystems.

A landscape is a mosaic of ecosystems. Ecosystems are spaces where resources are variously cycled. Inputs and outputs relate ecosystems to each other in a network that characterizes any landscape. An ecological analysis will result in maps revealing the order of magnitude and the relative spatial and dynamic weight of certain functions, notably the respective contribution of production, investment and control. An understanding of the dynamics of each ecosystem is essential to the management of land and sea and to the productivity of the environment as a whole.