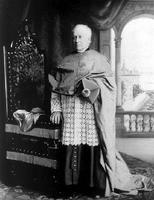 Elzéar-Alexandre Taschereau, Roman Catholic archbishop of Québec C and first Canadian cardinal (b at Sainte-Marie-de-la-Beauce, LC 17 Feb 1820; d at Québec C 12 Apr 1898). His father Jean-Thomas, a descendant of the leading seigneurial family of the Beauce, distinguished himself as a politician and through his articles for Le Canadien opposing Gov James CRAIG. His mother, Marie Panet, was niece of Bishop Bernard-Claude Panet of Québec. After precocious and brilliant studies at the SÉMINAIRE DE QUÉBEC (1826-36, 1837-42), which he capped with a doctorate in canon law obtained in Rome (1856), Taschereau had a dual career in teaching and the episcopacy. At the Séminaire de Québec, he was a teacher, director, prefect of studies and superior; he helped found Laval U in 1852 and served as its second rector (1860-66, 1869-71); he made several trips to Rome to defend the institution.

Adviser to archbishops Pierre-Flavien Turgeon and Charles-François Baillargeon, theologian for the latter to the First Vatican Council and vicar general from 1862, Taschereau became archbishop of Québec in Dec 1870 and was consecrated 19 Mar 1871. He quickly showed his intention to reaffirm the prerogatives of his position and his willingness to oppose the determined ULTRAMONTANES. As leader of a diverse group of suffragan bishops, he brought a moderate approach to the resolution of the great debates on Catholic liberalism, excessive clerical influence in politics, reform of the civil code, and church-state relations. At the same time he unswervingly defended Québec C's university monopoly against Montréal's claims and the efforts of Laval U's opponents, notably bishops Ignace BOURGET and Louis-François LAFLÈCHE. Because of his energy and a network of friends in Rome created by the archbishopric's representative, Benjamin Pâquet, the Holy See backed him unconditionally, despite contrary opinions of 2 apostolic delegates, George Conroy (1877-78) and Dom Henri Smeulders (1883-84). At the urging of, among others, the Canadian government, on 7 June 1886 Pope Leo XIII created Taschereau cardinal, an honour that gave him unequalled prestige throughout the country. He could not long enjoy it, for illness soon forced him first to reduce and then abandon his workload to a coadjutor, Louis-Mazaire Bégin, named in 1891. A man of great culture and ability, though taciturn, Cardinal Taschereau strongly influenced the Catholic Church (see CATHOLICISM) in Québec and helped it avoid confrontation with the state, even as he strengthened its religious vitality and political power.