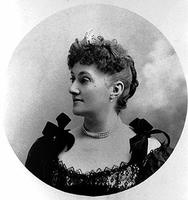 McPherson's theatrical pulpit techniques made her the most publicized revivalist in the world (courtesy Library and Archives Canada/C-52134). 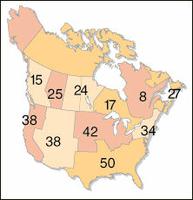 Percentage of Canadians and Americans who say that it is very important to encourage non-Christians to become Christians (courtesy Maclean's).
PreviousNext

Throughout Christian history, however, it has been used by certain groups to differentiate themselves from those considered less true to the Christian gospel. Accordingly, LUTHERANS claimed to be evangelical in contrast to Roman CATHOLICS, METHODISTS to ANGLICANS, low church Anglicans to their high church cousins, and the more revivalist BAPTISTS and Methodists on the American frontier to the more liturgical Anglicans and Lutherans. Hence, the term lacks precision historically and even today some Christians resist the co-opting of the term by a particular Protestant movement.

Evangelicalism, in current usage, is shaped by the fundamentalist-modernist controversy. Believing that liberals were abandoning the Christian essence in accommodating to the modern era's evolving ideology, conservatives in most Protestant denominations fought back in the late 19th and early 20th centuries. The Baptists bore the brunt of the conflict in Canada. MCMASTER UNIVERSITY, still Baptist in the 1920s, became the centre of the controversy when Thomas Todhunter SHIELDS, pastor of Toronto's Jarvis Street Baptist Church, accused the board of harbouring a modernist professor of divinity.

Shields's refusal to compromise led to his congregation's censure by the Baptist Convention of Ontario and Quebec in 1926. In turn, he organized the Union of Regular Baptist Churches with 70 churches and its own college; URBC members were expelled from the BCOQ in 1928. Other dissenters formed the Fellowship of Independent Baptist Churches, which in 1953 united with URBC to form the Fellowship of Evangelical Baptist Churches. Lesser conflicts - eg, one surrounding Brandon College (now BRANDON UNIVERSITY) - similarly caused schisms that, in turn, added to this new alliance of fundamentalist Baptists.

Outside Baptist circles the controversy (which reached its zenith in 1925 with the Scopes "monkey" trial in the US), seemed upstaged in Canada by the union that year of more liberal denominations in the UNITED CHURCH OF CANADA. Some more traditionalist PRESBYTERIANS refused to join, considering United Church theology too compromised.

The resistance of others to the "liberalization" of major Protestant churches contributed to a redrawing of the denominational map in Canada, if only gradually. The various HOLINESS and PENTECOSTAL groups, for example, shared in the fundamentalist cause in earlier decades and are partners in the larger evangelical movement today.

By the 1940s numerous Evangelicals sought to distance themselves from the strident militancy, rigorous separatism, anti-intellectualism and premillennialism identified with fundamentalism, and instead claimed the label evangelical. In the US, the National Association of Evangelicals, founded 1942, embraced the likes of evangelist Billy Graham, theologian Carl F.H. Henry, the journal Christianity Today and the Fuller Theological Seminary. The Evangelical Fellowship of Canada followed in 1964. Adherents affirm the full authority of Scripture in matters of faith and conduct; the necessity of personal faith in Jesus as saviour; and the urgency of converting the sinful.

Fundamentalists: Separation from All Liberalism

Fundamentalists saw this movement as a betrayal and in Canada formed the Canadian Council of Evangelical Protestant Churches in 1953, parallel to the American Council of Christian Churches, to emphasize premillennialism and strict separation from all liberalism. On the other hand, the 1960s and 1970s produced young evangelicals more open to biblical HIGHER CRITICISM and critical of the identification with conservative and even reactionary politics common in the US.

Already in the 1930s Canadian fundamentalism had proved much less reactionary politically than the American parallel. The dispensationalist founder of the Calgary Prophetic Bible Institute and preacher on the Back to the Bible Hour, William ABERHART, and his lieutenant, Ernest MANNING, combined belief in the imminent end of the world with SOCIAL CREDIT, a populist mixture of social reform and small-time capitalism. This was the first and only time before the rise of the so-called "moral majority" in the US that fundamentalism in North America sought and won political power.

Although strongly opposed to socialism, as well as to the SOCIAL GOSPEL as preached by the more liberal Christians, Aberhart and Manning, together with most Canadian fundamentalists, rarely identified Christianity with raw anticommunism as did some of their US counterparts. Even the Renaissance Canada movement - directed against secular humanism in family, school and government - and the TV show 100 Huntley Street are restrained versions of their US parallels and exemplify Canadian moderation.

The continuum from the closed fundamentalist to the more open evangelicals is evident in several representative denominations. Plymouth Brethren (Christian Brethren) separated from the Church of England in the 1820s to regain certain emphases of primitive Christianity. Their renowned leader John Nelson Darby travelled extensively in Ontario in midcentury, drawing Baptists and Presbyterians among others to his unique "dispensationalist" reading of the Bible. His premillennialism, a conviction that Christ's second coming would precede the millennium (see MILLENARIANISM), undergirded a long series of late-19th-century international "prophetic" Bible conferences, several of them in Niagara-on-the-Lake, Ont.

The fundamentalist movement drew ideology, leadership and organization from these conferences, but most of Darby's disciples did not follow him into the Brethren churches. Nonetheless, Brethren assemblies, of some 8 varieties according to degrees of exclusivism, were established in Canada and are growing today. Regent College, a major evangelical graduate theological school in Vancouver, owes much to the Christian Brethren even as it does to evangelical Anglicanism.

The Christian and Missionary Alliance, centered in Nyack, NY, where the denomination established one of the first BIBLE SCHOOLS, was founded in the 1880s by former Canadian Presbyterian minister A.B. Simpson. Emphasizing conversion, holy living and missionary endeavours, the CMA became a classical evangelical denomination. This church operates the Canadian Bible College and Seminary in Regina. With a theology much like the CMA's, the Missionary Church arose from the 1969 union of the United Missionary Church and the Missionary Church Association, which originated in several late-19th-century MENNONITE divisions. The new body, emphasizing mission work, has Bible colleges in Kitchener, Ont, and Didsbury, Alta.

The Associated Gospel Churches of Canada were organized in 1925 in Ontario to serve fundamentalists leaving other denominations. Their belief in premillennialism, an inerrant Scripture, holy living, and sectlike separation from the world were typically fundamentalist in contrast to the more evangelical stance of The Missionary Church. This group has 105 churches in Canada today.

Nondenominational fundamentalist and evangelical Bible schools, colleges and seminaries teach theology alongside the liberal arts to increasingly more students each year. At the same time, a significant upgrading has taken place. Bible colleges are transforming themselves into two year liberal arts institutions while Trinity Western University at Langley, BC, King's College in Edmonton, Alta, and Redeemer College in Ancaster, Ont, have all gained the status of provincially recognized independent universities.

Evangelically oriented renewal movements are growing even in such denominations as the United Church. Faith Today and Christian Week have both developed a highly respected political voice, with regular contributions by people like Brian Stiller, political science professor John Redekop, and even MPs like David Kilgour who symbolizes the vitality of this sector of Canadian Protestantism in the late 1980s. Fundamentalism and evangelicalism are very much a part of modern Canada.