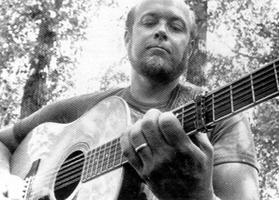 By the time of his death at the age of 33, Rogers had established himself as one of Canada's most talented singer-songwriters (courtesy Canapress). 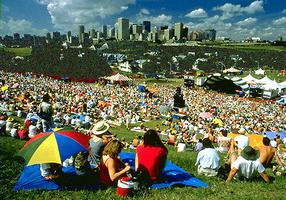 At the close of the 20th century the number of folk music festivals had risen to 365, as listed in Canada's Guide to Festival Events. In addition, there were countless small local festivals and old-time fiddling contests. Folk festivals arose in response to the widespread popularity of traditional music in the 1950s and 1960s. Early festivals such as Miramichi (est 1958) in New Brunswick were devoted to preserving the authentic folk music of local performers, many of whom rarely appeared outside of their communities. As interest in folk music continued and festivals grew, urban "revival" performers who learned their music from books and records became popular. At the peak of the folk-music revival in the mid-1960s, urban folk singers were composing their own songs and music inspired by folk models. Singer-songwriters such as Stan ROGERS were featured at all major festivals. By the late 1980s, some larger festivals, responding to financial challenges, had become more eclectic in order to attract larger and more varied audiences.

A handful of Canadian festivals attained and held international recognition and drew performers and listeners from all parts of Canada and, by the 1990s, elsewhere in the world. Best known of these was the Mariposa Folk Festival, founded in 1961. It began modestly in Orillia, Ont, but by 1968, when it moved to Toronto Island, it was the largest festival in North America, attracting international performers such as Joni MITCHELL, Joan Baez, IAN AND SYLVIA Tyson and Gordon LIGHTFOOT. Mariposa's use of multiple workshop and concert stages and its development of separate craft, children's and other specialty areas became the model for other major festivals. In the late 1990s this classic festival was reborn as Mariposa in Muskoka.

The Winnipeg Folk Festival (est 1974), the largest festival into the 1990s, offered a wide variety of music, song, dance and storytelling from all over the continent. Singer-songwriters gained in popularity, but traditional music was still featured. In later years this festival became even more eclectic in forms and styles of music and song. International performers were invited from Europe, Africa and Asia. While the Winnipeg Folk Festival was no longer the largest of the Canadian festivals by the late 1990s, it established a model that still influences other musical events in both Canada and the US. The size ranking of festivals at the turn of the century was Edmonton (est 1980), Winnipeg, Vancouver (est 1979) and then Calgary (est 1980). Winnipeg, Vancouver and Calgary take place in July, Edmonton in August. These festivals draw 10 000 to 20 000 people a day, of all ages and backgrounds. The usual format offers a wide variety of workshops at different sites during the day and large main-stage concerts at night.

Increasing numbers of smaller festivals focus on a particular musical tradition (Jewish klezmer music, for example), or in one case, a single instrument: Carrefour Mondial de l'Accordie in Montagny, Québec is an international festival of accordion music.

Folk music festivals frequently featured storytellers, and there were also several Canadian festivals devoted almost entirely to storytelling with a smaller musical component. The oldest of these, the Toronto Festival of Storytelling, has influenced similar festivals across Canada. Significant festivals take place in Vancouver and Edmonton, while Calgary, Winnipeg, and Fredericton, among others, have held modest storytelling events. The Yukon International Storytelling Festival has been unique in featuring performers from local First Nations communities as well as from circumpolar regions of Europe and Asia. (See also FOLK MUSIC, ANGLO-CANADIAN; FOLK MUSIC, FRANCO-CANADIAN.)