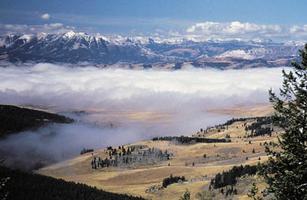 Foothills, a region of rolling, undulating or hilly terrain lying between an area of plains and a mountain range. Generally, foothills are regarded as a transitional relief form combining some of the elements of a lower-elevation, flat landscape with those of mountainous topography, but without extensive or extreme portions of either. Physiographically, the foothills are regarded as part of the mountains. The French word piedmont ["at the foot of the mountain"] is sometimes used to describe an area within which foothills lie. In northern Italy the region of Piemonte is a hilly area lying between the wide, flat valley of the River Po and the Italian Alps.

LandformsIn Canada, the foothills of the Rocky Mountains occupy an area between the Rockies and the Alberta plains and associated lowlands of northeastern BC. Covering about 60 000 km2, this region extends from the Canada-US border northwestward, a distance of some 1100 km, to the Peace River region of BC, and averages about 50 km in width. Summit elevations in the foothills average approximately 1800 m; the plains area to the east and the mountains to the west average about 1200 m and 2500 m respectively.

Most of the foothills of the Rockies consist of folded and faulted Mesozoic and Cretaceous sedimentary rocks that were deformed by mountain-building forces (the Columbian and Laramide Orogenies) that occurred during Cretaceous (144-66.4 million years ago) and early Tertiary (66.4 to 36.6 million years ago) times. The foothills were extensively glaciated during the Quaternary (1.6 million years ago to about 10 000 years ago). In the last major ice advance, the Wisconsin, the mountain (Cordilleran) glaciers and the Continental Ice Sheet merged and covered some areas of the foothills while other areas, especially in the Porcupine Hills in southern Alberta, remained ice free.