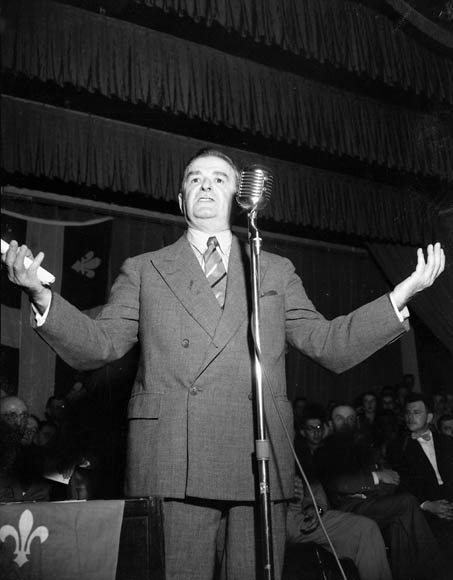 Origins of a Myth

Several people who grew up in Quebec between 1930 and 1950 expressed that it was “a sad and gloomy world where [they] lived in fear of sin.” They believed that during this time, French Canadians felt guilt, loneliness and anxiety daily. Social life was allegedly dominated by the Church and Catholicism, which established norms and values for everyone. Modern and liberal ideas were suppressed in favour of social conservatism, supported by the Church and Maurice Duplessis’ Union nationale political party. The Duplessis regime was considered regressive and corrupted in terms of governance and development. Some accused Maurice Duplessis of selling provincial resources and workers to profit the great industrialists. These criticisms were at the origin of the Grande Noirceur myth.

After the death of Maurice Duplessis in 1959 and the victory of the Liberals in June 1960, many people wished to split from clerical authority, ruralism and the Duplessis “bossism”, a process which trivialized privileges, corruption and clientelism. Opposition became a formalized reform project against Catholic truths and clerical authority, and in favour of political, cultural, social and economic democratization. This movement’s goal was to give rise to social justice by developing a providence state and increasing civic engagement in public domains.

As early as the 1930s, sociologists and theologists who came from France and the United States described Quebec as lacking intellectual life and characterized the French-Canadian society as a “folk society,” in other words a traditional society who had only partially integrated modernity. Through their studies of Quebec’s difficulties vis-à-vis modernization, they had a significant influence on the rise of sociology and political and historical sciences in the province. Delays and obstacles were hence cited as key players in Quebec’s history. While trying to understand social change, several intellectuals attempted to legitimize, sometimes involuntarily, part of the Grande Noirceur myth. In 1961, Léon Dion was already referring to the period under Duplessis as a “past regime” and the excesses, lack of compassion and resistance to modernity observed during those times allegedly called for a “revolution” to end the status quo.

The issue of historical memory is particularly important, and it partly explains the diverse interpretations of the period. Despite this, the myth of the Grande Noirceur as a profoundly regressive time continues to influence the historical interpretation of Quebec society.

The Truth behind the Myth

The Grande Noirceur myth lacks in nuances in terms of the real political, religious and economic delays faced by French Canadians during the Maurice Duplessis reign.

In 1921 Quebec, less than half of the French-Canadian population lived in a town with one thousand inhabitants, compared to two thirds of the Ontarian population. (See also Ontario.) The working class and urban cultures resembled those of other North American towns in many ways. While payroll expenses for industrial jobs doubled in Quebec between 1939 and 1943, by 1950 the manufacturing output was still only 55% of that of Ontario. Between 1926 and 1958, personal income stalled at approximately 72% of Ontarian levels. The gap between Quebec and the rest of North America was real, but not as significant as what the Grande Noirceur myth claimed.

The clergy supported the Union nationale party in 1936, but mostly because its program was inspired by the Pope’s teachings. The Church also had connections with candidates from all parties. At first propelled by a thirst for power, Maurice Duplessis did not seem to “awaken any particular sympathies among priests”, each of whom had his own ideas on how to address the matters of the hour. The clergy thus did not favour the Union nationale over any other political party. (See also: Canadian Party System; Ultramontanism)

In his political rhetoric, Maurice Duplessis portrayed cultivators as having “the common sense, the stability and the patriotism” without which “there would be no possible progress in Quebec.” (See also Agriculture in Canada.) However, with all proportions maintained, the expenses of the provincial and federal governments increased at a similar rate in most fields. Namely, Quebec’s public expenditure for education went from 4.6 million to 181 million between 1944 and 1959. Throughout its reign, the Duplessis government built 4,000 schools to allow more children to have access to education. As for higher education, record attendance numbers were reached in 1955–1956 (24,000 students), then in 1966–1967 (75,000 students). However, the educational gap between Quebec and Ontario only started to dwindle during the 1980s and 1990s.

Maurice Duplessis and the Church also contributed to Quebec’s intellectual development. Some consider that Duplessis and the Church consolidated the nationalist sentiment from which neo-nationalism originated in the 1960s. The voices raised against dogmatism and in favour of democratization often came from the clergy and laity. Solid examples include Jean-Paul Desbiens who wrote Les Insolences du frère Untel. In these essays, Desbiens criticized the lack of freedom and rigour in the Quebec education system. Despite the faults found in clericalism, people did not generally seek complete secularization; most called for a “conversion of the Christian thinking” to allow for an unprecedented introduction to modernity.

The Grand Noirceur was not a period of cultural stagnation; during this time, many cultural institutions emerged, like the Théâtre du Rideau vert (1948) and the Éditions de l’Homme (1958).

Findings on the Duplessis Period and the Quiet Revolution

According to Martin Meunier, Quebec’s economic structures, customs and national identity modernized "slowly, but surely." The Grande Noirceur myth exaggerates the idea of the province’s developmental stagnation. The Quiet Revolution could thus be considered the result of a long process to which the Catholic Church contributed to help traditional Quebec evolve into a modern society. The influence of Catholicism on Quebec culture started declining much later, in the last decades of the 20th century. The progressive and constant disengagement from mass and sacraments has begun at the turn of the millennium.