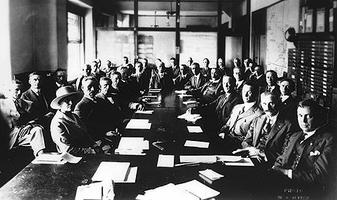 The UFof A after they won their first election in 1921 (courtesy PAA).

John Edward Brownlee, lawyer, politician, executive, premier of Alberta 1925-34 (b at Port Ryerse, Ont 27 Aug 1884; d at Calgary 15 July 1961). He was one of Alberta's most effective premiers and for 5 decades a major voice in western farmer organizations. Son of a small-town merchant and a devout Methodist teacher, he moved to Calgary in 1909 to pursue a career in the booming West. He became solicitor for the fledgling UNITED FARMERS OF ALBERTA and played an important part in the amalgamation of United Grain Growers in 1917.

When the UFA won the 1921 Alberta election, he became attorney general and helped organize the ALBERTA WHEAT POOL. After a well-mannered backstairs revolt, he became premier in Nov 1925, and his most significant achievement was his negotiation of the transfer to Alberta of control over its natural resources, an agreement drafted by him and signed 14 December 1929.

During the Depression, Albertans became frustrated with his fiscal restraint, cautious assistance programs and political conservatism. A vigorous but lonely voice against the tide of SOCIAL CREDIT, and undermined by accusations of personal scandal orchestrated by his political opponents, he was forced to resign as premier in July 1934. Both he and the UFA saw their political careers brought to a devastating end in the election of August 1935. In 1948 he rejoined UGG as president and general manager, modernizing the company's financial structure and rationalizing the elevator system by closing smaller, inefficient operations and concentrating on larger delivery points.