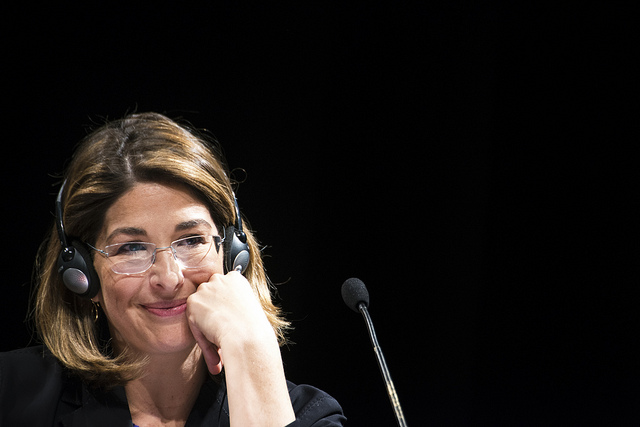 Naomi Klein talks about her book, This Changes Everything: Capitalism vs. The Climate in Madrid on 26 March 2015. (courtesy Adolfo Lujan/Flickr CC)

Growing up with an outspoken feminist mother, Klein has expressed how she rebelled by being a “teeny bopper” who was addicted to brand names and shopping malls. She has described one of her political awakenings as the 1989 École Polytechnique shootings in Montreal, where a gunman shot and killed 14 women; Klein has said, “it was the moment where I could no longer be this apolitical teenager” (see also Polytechnique Tragedy).

Klein went on to attend the University of Toronto, where she served as Editor-in-Chief of the school’s main newspaper The Varsity. She later dropped out of university to pursue a position as a columnist for The Globe and Mail.

Klein lives in Toronto, Ontario, and is married to filmmaker Avi Lewis, with whom she has one son, Toma. Her father-in-law is the politician and diplomat Stephen Lewis, who was the leader of the Ontario New Democratic Party from 1970 to 1978. Her mother-in-law is journalist and author Michele Landsberg.

Naomi Klein returned to university in 1996, but feeling that it had been overtaken by marketing and advertisements, she dropped out for a second time. She began researching brand culture and globalization for her debut book, No Logo (1999), in which she dissects the role of the corporation in a globalized economy. No Logo also tackles the question of how brand names affect culture, and discusses their cost to the developing world, where most products are made. The book has been translated into more than 30 languages, and was named one of the top 100 non-fiction books of all time by The Guardian.

The publication of No Logo coincided with mass protests against global trade organizations and economic summits. Klein herself participated in several of these counter-summits as well as the 2001 International Conference on Globalization. In her second book, Fences and Windows (2002), Klein discusses how globalization policies enacted by international bodies such as the World Bank serve to entrench the divide between rich and poor, likening these policies to invisible fences.

Klein has received criticism for challenging brand culture while marketing her own books. Upon being asked whether she herself is a brand, she has responded, "Probably… But I try to be a really crap one."

In No Logo, Klein examines how brands impact the labour market, popularizing the term “McJob,” meaning a temporary job with low income and high insecurity. In Canada, it is estimated that up to 25 per cent of workers in 2017 had what could be considered a precarious job. Precarious employment is associated with increased negative effects on physical and mental health. (See also Labour Policy.)

Naomi Klein’s next paradigm-shifting thesis, outlined in her 2008 book The Shock Doctrine: The Rise of Disaster Capitalism, was that governments and politicians use the shock of disasters — natural, economic or political — to push through authoritarian policies and re-engineer society in the interest of corporations. She cites numerous cases, including the devastating Asian tsunami of 2004, Hurricane Katrina in 2005, and the United States’ “War on Terror.”

Klein and director Alfonso Cuarón adapted The Shock Doctrine into a short film, while directors Michael Winterbottom and Mat Whitecross turned it into a long-form documentary.

In Klein’s 2017 book, No Is Not Enough: Resisting Trump’s Shock Politics and Winning the World We Need, she analyses the ascension of US president Donald Trump and the early days of his presidency, framing his politics using the model of her Shock Doctrine thesis.

Climate Change and This Changes Everything

Naomi Klein has confessed that she came late to the issue of climate change, explaining, “It wasn’t that I didn’t know about it or didn’t care about it.… I felt like human rights, inequality, all of these injustices that I was focused on, were more pressing.” She describes her wake-up call as covering Hurricane Katrina in 2005, where she witnessed how climate disasters intersect with weak or broken public spheres to cause significantly greater damage.

Klein’s 2014 book, This Changes Everything: Capitalism vs. The Climate, outlines the ways in which unfettered economic growth hastens climate change, and exposes ways in which our current economic system is exploiting climate change for economic gain. This includes the carbon credit system and the growing field of natural disaster insurance, examples of how the crisis is being “seized upon to hand over yet more resources to the 1 percent.”

In 2016, Klein narrated and appeared in a short film, Under the Surface, produced by The Guardian, which documents the decline of Australia’s Great Barrier Reef and Klein’s anger that her son will never be able to experience this part of the natural world.

Klein is on the board of 350.org, an international grassroots organization that aims to reduce our dependence on fossil fuels. She was also one of the authors and inaugural signatories of The Leap Manifesto, a call to restructure the Canadian economy in a way that respects social systems and the environment.

Naomi Klein works as a staff or contributing journalist for multiple prominent publications and is Senior Correspondent for The Intercept. Her reporting on the Iraq War won her a James Aronson Award for Social Justice Journalism in 2004.

Klein is also actively engaged in teaching. She was a Miliband fellow lecturer at the London School of Economics, and in 2018 was named the Gloria Steinem Chair in Media, Culture and Feminist Studies at Rutgers University–New Brunswick (located in New Jersey). During the three-year appointment, she will research and teach on topics including activism in journalism, new media technologies, and movements for racial, gender and economic justice.