This article was originally published in Maclean's Magazine on September 23, 1996

Marlene Stanton was unaccustomed to finding urgent stories in the daily mail, so she let the letters languish on her desk.This article was originally published in Maclean's Magazine on September 23, 1996 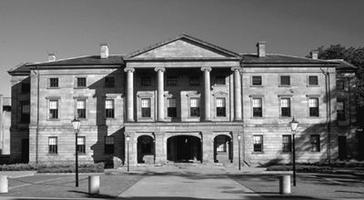 Site of the provincial legislature of PEI (photo by John Sylvester).

Marlene Stanton was unaccustomed to finding urgent stories in the daily mail, so she let the letters languish on her desk. But when the assignment editor for Prince Edward Island's CBC TV supper-hour show, Compass, finally turned to the pile late on Tuesday, June 25, she found a letter that had arrived a few days before - and it was a stunner. Inside was a swastika-emblazoned missive from the self-styled Loki 7, who had previously claimed responsibility for unsolved bombings at the provincial legislature in April, 1995, and at the Charlottetown courthouse in 1988. "There is an unexploded bomb in a Green Gables bag among the tanks in the North East corner of the Speedy Propane compound on Allen Street," the letter said. "This one is for the BOMB SQUAD." As with previous correspondence from Loki 7, the missive ended with the declaration "Heil, Thor."

A day later, the RCMP's bomb squad found the explosive device where the letter said it would be, hidden under some empty propane tanks. And while police were able to safely detonate the pipe bomb - which was similar to the ones used in the legislature and courthouse incidents - the psychic shock waves from the latest terrorist threat reverberated across the small, tight-knit province. Under public pressure to catch the perpetrator, the city police, who previously had three officers working part time on the case, teamed with the RCMP to form a six-person joint task force, which is now working full time tracking down leads. Based on their most recent investigations, they now believe that Loki 7 is most likely an individual, a male loner from the Island, who is experienced in handling explosives. He is also someone who has a grudge against the system and likes to use the media to taunt the police and the public.

In other words, Prince Edward Island's very own Unabomber. Police say they have narrowed their focus to a short list of possible suspects who had the means, motive and opportunity to plan and execute the bombings. But they admit that they are still a long way from making an arrest. "In all the years that I've been involved with this department," says Const. Richard Collins, a 16-year veteran of the Charlottetown police force, "this is one of the most detailed, complicated and exacting investigations I've been aware of. We don't have a smoking gun, we don't have a witness."

They also have very few clues. The letters sent by Loki 7 - seven in all over 13 months - bear routine Charlottetown postmarks, but are free of fingerprints. Their content is also frustratingly vague when it comes to establishing motive. While they are sprinkled liberally with references to "venal injustice officials" and "crypto-Zionist producers" they say little about why bucolic Prince Edward Island is being singled out for bombing. And despite some of the neo-Nazi rhetoric, police do not believe that Loki 7 represents some kind of white supremacist group. In fact, investigators doubt that it is a group at all, reasoning that in that case something would have leaked out. The Island, they say, is simply too small to keep such secrets for long. Instead, Loki 7 appears to confide in no one, other than in his occasional missives to the media.

The first such letter, dated May 24, 1995, was addressed to the "chief justice" of the P.E.I. Supreme Court. In it, Loki 7 claimed responsibility for the courthouse and legislature bombings, and threatened more bombs aimed at judges. The following day, Sara Fraser, co-host of CBC's Compass, received another letter from Loki 7, which contained specific information about the 1988 explosion at the courthouse, along with an accurate drawing of the bomb and timing device.

The courthouse bombing had long ago been relegated to the police files. Hidden in a large flower bed, the pipe bomb exploded at 6 a.m., rocking the law courts building on the Charlottetown waterfront. The home of the provincial Supreme Court, which sustained extensive damage to its law library, was empty at the time. Police reopened the file following the explosion at the P.E.I. legislature on April 20, 1995, just one day after a terrorist bombing in Oklahoma City killed 166 people. Packed with gunpowder, the legislature bomb was placed under a wheelchair ramp leading to the 153-year-old sandstone structure. The explosion occurred at midday, sending shrapnel flying for several blocks, blowing out about 20 windows, but claiming only one casualty - a local resident who had been enjoying the sunshine on a nearby bench suffered a broken ankle and several severed blood vessels (he has fully recovered).

Police took the initial letters from Loki 7 seriously, but they also had some reservations. For one thing, most of the information about the bombings could have been gleaned from media reports. Also, why had it taken the would-be terrorist so long to claim credit for his actions? Even the name, Loki 7, was a source of consternation. Police knew that Loki was the Norse god of mischief, but so what?

But the near-bombing earlier this summer at the Speedy Propane compound convinced them that they were dealing with a genuine homegrown terrorist. And on June 27, Loki 7 sent another letter to all the Island's media - the last received to date - vowing to continue the bizarre campaign against the justice system and the government and adding a new target to the hit list: corporate Canada. As usual, no reason was given.

The murky actions of Loki 7 do not sit well with the province's 133,000 residents, who take pride in what they like to call the "Island way of life" and who relish the province as a place of calm in an increasingly violent world. Some Islanders may have been concerned that the provincial murder rate doubled last year - although that really only meant that instead of one murder, there had been two. But now, the thought that there might be a terrorist in their midst has jolted many in a place where, often, doors are still left unlocked at night.

Most of all, in a province that depends heavily on tourism, Islanders are concerned about the potential fallout of Loki 7's actions. "We are not going to attract anybody to peaceful, tranquil little Prince Edward Island if we continue to get bad publicity from the bombings by somebody out there who is going to eventually kill someone," says Charlottetown councillor Mike Duffy, who was instrumental in getting city council to post a $25,000 reward in July for information leading to the arrest of Loki 7.

Some say the damage has already been done. Marina Campbell, the owner of Pine Lawn Bed and Breakfast in Central Bedeque, 50 km west of Charlottetown, says this summer she had guests who cut short their stay in the province."They had the radio on and there was too much publicity about the bomber," says Campbell. "They were nervous and they just wanted to get off the Island, and to me it was perfectly understandable."

At the same time, Islanders are unnerved by the extra security precautions now in evidence. At the legislature, once an unrestricted building, visitors must show identification, check their bags and sign in. At the courthouse, sheriff's deputies now search potential jurors and their bags. "Most Islanders are really set back by this," says Const. Collins. "They see it as an invasion of their privacy or a loss of their way of life." Perhaps the most telling example: last month there was a widespread public outcry after the Summerside Taxation Centre removed all its decorative bushes. Officials felt they might be too tempting a hiding place for a bomb. Islanders, it seems, do not like to sacrifice anything to a terrorist, even a few flowers.